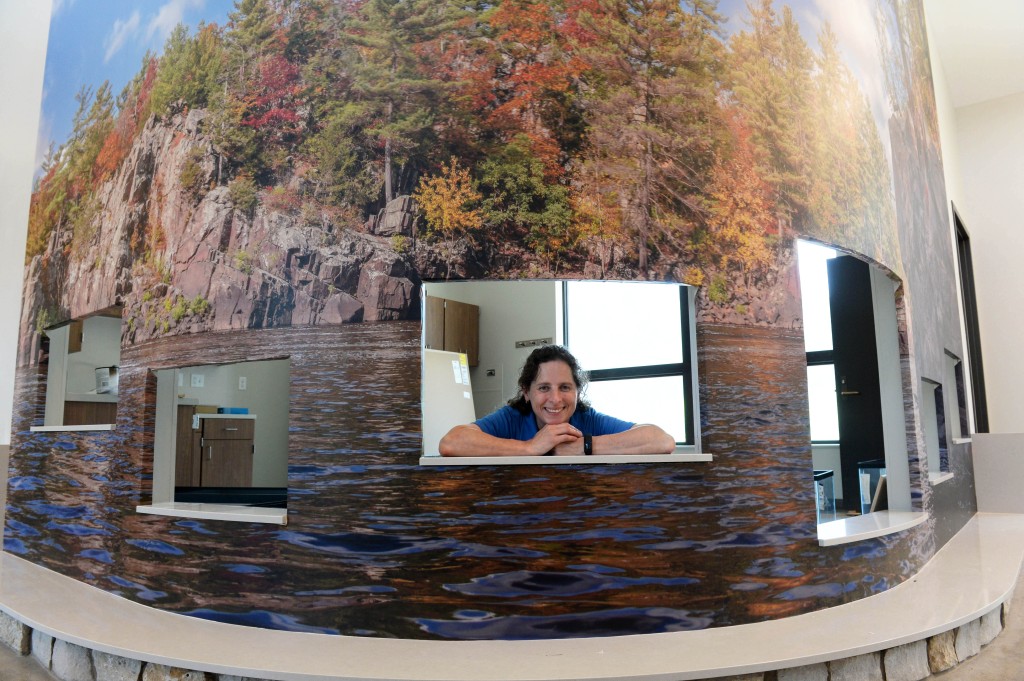 It seems staff and volunteers aren’t just eager to make use of the beautiful new Carpenter Nature Center on its 300-acre campus just south of Hudson, Wis.

This spring a pair of belted kingfishers moved into a 15-foot pile of top soil that construction crews were saving for the center’s gardens. Short-legged birds use their front paws and strong beaks to excavate nesting sites in soil edges, usually avoiding those with vegetation.

A pile of dirt from a year near the new parking lot – less than a half-mile from the St. Croix River – fits the bill.

“In May the birds were scolding and making all kinds of sounds, but at the end of June, I didn’t see or hear them,” said Jennifer Veith, executive director of the Nature Center. Campus near Afton.

Still, Wyeth, an avid birder, did not want to allow the center’s excavation contractor to move the top soil “until we know for sure that the birds have vacated the premises.”

Wyeth invited an ornithologist friend to come over with his borescope in early June. Using a camera on the end of the device’s long arm, they were able to confirm that “Mrs. Kingfisher” was still at the site, she said.

“She’s adorable,” said Wyeth during a recent tour of the site. “He’s got these spiky blue feathers. Can you hear that chatter? He’s Mr. Kingfisher. He doesn’t like us getting too close.”

Keegan McIntosh, the general contractor’s principal supervisor, said no one on the construction team blinked when they received news that their plans were changing to accommodate the birds.

“It’s a nature center, so nature comes first,” said Mackintosh, who works for Stutco Speedling Construction in Hastings. “If they say, ‘Don’t touch it, we want the birds to nest,’ that’s what we’re going to do. … Luckily, we found out that day that we were going to move it. A day later, It doesn’t bode well for the Kingfisher family.”

The $4 million new interpretive center, which opens to the public on July 9, is the result of decades of planning.

Laurie and Al Hein were once part of the site. In the 1980s, Haynes was looking for an organization to be the stewards of his land when a neighbor, Dan Greenwald, suggested they reach out to the Carpenter Nature Center in Minnesota. The couple’s 98-acre donation in 1989 marked the beginning of Carpenter’s Wisconsin campus, which is just north of the Troy Byrne Golf Club.

More parcels were bought as they came up for sale, and the Wisconsin campus now boasts 300 acres permanently preserved for public use. Like the Minnesota campus, the center is free and open to the public.

Carpenter wants to protect habitat and teach people about nature, and the new Interpretation Center will do just that, Wyeth said. It has accessible classrooms, restrooms, meeting spaces, nature exhibits and outdoor learning spaces.

Carpenter’s staff gathered tips through more than 300 surveys given to people at events such as the Cove Art Festival and the River Falls Bird Festival. “We stationed people outside the County Market grocery store[in Hudson]to see what people wanted,” she said. “You make what people want to use. It turned out perfect.”

Surveys showed that people wanted a room that could be used by multi-generational families, she said. “You can come out and enjoy nature and watch the birds at bird feeders even if you can’t get out on the trails,” she said. “You can relax here and have a cup of coffee. It is accessible to all.”

There is also a small wellness room near the family room that can be used for prayer, by nursing mothers or children “who may need a quiet space for a few moments,” she said.

The family room can be retrieved from the main part of the interpretive center by massive rolling doors made of Douglas fir from a house that once stood at the north end of the property.

“We first looked at restoring the house and building a visitor center, but it didn’t have a good foundation, and you had to stand in the shower for the electrical system, and the roof leaked,” Wyeth said.

The classroom also has doors so that school groups can be separated from others using the main room – a lesson learned from the Carpenter Nature Center in Minnesota. “One of the things we learned was … it was the big place where everything that happens doesn’t always work out so well,” Wyeth said.

The land, which includes more than 10 miles of trails, includes extensive prairie, a wooded hill, an old farm, and an oak savannah. Hundreds of red pines that were planted on the property in the 1940s still remain. “We have this little area of ​​habitat where these species act, like in the North Woods, so we have warships with golden wings, and people have seen fishermen,” Wieth said. “We also have a pair of crows.”

Carpenter’s staff and volunteers have planted many native trees, including ironwood, oak, maple and river birch, “to create a diverse tree forest that is more resilient to climate and temperature change,” said Wyeth. “Since the red-pine plantation is a monoculture, it does not support a diverse ecosystem of birds and insects.”

Inside the nature center, two turtles, snakes, frogs, toads and an axolotl (an aquatic salamander) will be on display in walled tanks. There’s a washer and dryer in the back room of the tank “because when you’re cleaning a turtle tank, you need towels,” Wyeth said. “It even has a fan in case the turtles smell bad.”

One of Wyeth’s favorite features is the interactive migration map that shows the Carpenter Nature Center’s 41 years of bird-banding research, including its work on the saw-whet owl. “You could touch up a location in Alaska, for example, and a pop-up screen would appear with an image of a dark-eyed Junko who was tied up in Carpenter and driven all the way to Alaska,” she said. Told. “There will be data about when the bird was tamed, its age at the time and the distance it traveled. As more birds reunite, we’ll add more records, so the map will always be changing.”

Wyeth said the name of the volunteer or employee tying the bird would also be listed. “Can you imagine that you could go to the site with your grandmother or grandfather and see their name on such a scientific map as Bander?”

Displays will feature smells and sounds native to the area, and there are tables where people can share treasures found on the property. “We’re expecting agates, rocks, fossils, skulls and chewed-up pieces of wood that Beaver has worked on,” Wieth said.

Carpenter board member Scott Northard, who volunteered his time as project manager, said one of his favorite features of the new building are its bird-safe windows. They said they have horizontal lines that make it easier for birds to grasp the glass, reducing the chance of a collision. The windows are also not facing each other, he said, “so that the birds don’t think they can fly.”

Once the kingfishers are nesting, Wyeth said, the crew will complete the garden project.

“Hopefully, it will be very soon,” she said.

The grand opening of the new $4 million Carpenter Nature Center in Hudson, Wis., will take place July 9-10. The Nature Center is at 279 S Cove Road, Hudson, Wis. Events planned for the weekend include a live raptor show, Masters of the Sky Show, and free guided bird and plant hikes. The building will be open from 9 a.m. to 5 p.m. for exhibitions and visiting venues. To register for hiking, visit carpenternaturecenter.org.