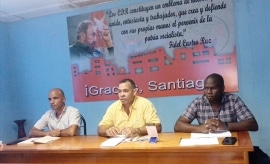 In an extraordinary plenary session held this Wednesday, the leadership of the Committees for the Defense of the Revolution (CDR) in Santiago de Cuba approved 125 pre-candidates for deputies in the National Assembly of the People’s Power.

In this way, the Cedars enrolled men and women from all social strata, with an excellent work at the province and country level.

In this sense, Joel Paz Pérez, CDR’s provincial coordinator, expressed that the proposals meet the conditions that a deputy of the Cuban Parliament must have, being “the most genuine of our people”.

He also noted that the selection process was a demonstration of democracy and popular participation, with zone coordinators, CDR presidents and Santiago residents participating on behalf of their communities.

In accordance with the provisions of the Constitution of the Republic and Law No. 127 “Electoral Law”, the Council of State called national elections on March 26, 2023 to elect representatives to the popular National Assembly for a term of five years. Power.

In its Article 171, Law No. 127 establishes that municipal, provincial and national candidacy commissions request pre-candidates proposals addressed to the mass organizations that integrate them.

Netflix will launch its cheap plan with a November 1 ad

The best RTX graphics card to play at 1440p recovers to its historical low: 8GB and triple fan at a knockdown price