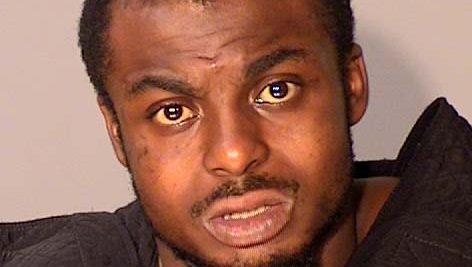 A domestic call to an apartment in St. Paul on Tuesday turned even worse for a police officer when the man pulled a loaded gun inches from the policeman’s face, prosecutors said.

At one point, as St. Paul officer Andy Eru was wrestling for the gun, he felt it was about to be fired. According to the criminal case filed on Thursday, Eru “turned his head and closed his eyes, waiting for the shot,” but the gun did not fire.

Allen Denzell Oliver-Hall, 27, of St. Paul, was charged with second-degree assault with a dangerous weapon.

During the struggle, Eru managed to snatch the gun from Oliver Hall and throw it on the living room floor. An officer held him until another officer arrived and handcuffed him.

According to the criminal case, there was a cartridge in the chamber.

Eru was sent to an apartment building at 1553 Timberlake Road – west of Interstate 35E and south of Wheelock Parkway – around 3:20 p.m., which was initially reported to be related to a custody exchange.

Oliver-Hall’s girlfriend, identified as C.A. in the complaint, said that earlier that day he had yelled and ruined things in her apartment. She said he was drunk and barricaded the front door with a sofa. She and her son left.

K.A. informed Eru that she went back to the apartment to collect more things, but she couldn’t get in because her keys were inside. K.A. and her aunt asked Eru to “help get K.A. to her apartment, to make sure Oliver Hall is all right, and to make sure her return is safe,” the complaint reads.

Oliver Hall let Era inside and said that he did not live there and was visiting K.A. His eyes were bloodshot and watery, and his breath smelled of alcohol, which made Eru think he was still drunk. Oliver Hall asked Era to leave several times so he could pack his things, but the officer said he couldn’t do it as K.A. wanted him to stay with him in the apartment. Eru tried to get Oliver-Hall to leave with him for K.A.’s safety. He agreed.

Oliver Hall walked over to the couch, said he wasn’t going back to prison, and sat down. Eru assured him that he had no intention of taking him to prison, but simply wanted to give him a lift somewhere, the complaint said.

Oliver-Hall repeatedly stated that he would leave if Eru turned his back for a few seconds, leading the officer to believe that he was trying to distract him and hide something, the complaint said. Eru asked to send another squad to respond.

Eru then saw the back of a pistol sticking out between Oliver-Hall’s legs.

“Officer Eru realized that his life was in danger and decided to capture Oliver Hall, ordering Oliver Hall to keep his hands up,” the complaint says.

Oliver-Hall grabbed his gun and aimed it a few inches from Eru’s face. He grabbed the barrel of his gun, then grabbed Oliver-Hall. They landed on the sofa.

Oliver-Hall put his finger on the trigger of his pistol and yelled, “The pistol is loaded!” according to the complaint. Eru felt the gun was about to go off and believed “Oliver-Hall would shoot him if he got control of him,” the complaint says.

According to the complaint, Oliver-Hall refused to release his gun when ordered to do so. Eru managed to snatch the gun from him and throw it away. Oliver-Hall tried to get to his feet, but Eru leaned on the weight of his body to keep him on the couch until the second officer appeared.

The complaint states that Oliver-Hall had a previous conviction for burglary at an apartment building outside of Illinois, which could disqualify him from owning a firearm. He was convicted on this charge shortly after he turned 18.

Oliver Hall remained in the Ramsey County Jail Thursday in lieu of $200,000 bail. On Friday morning, he is due to appear in court on the charges.

This traditional hotel amenity is disappearing. blame the pandemic