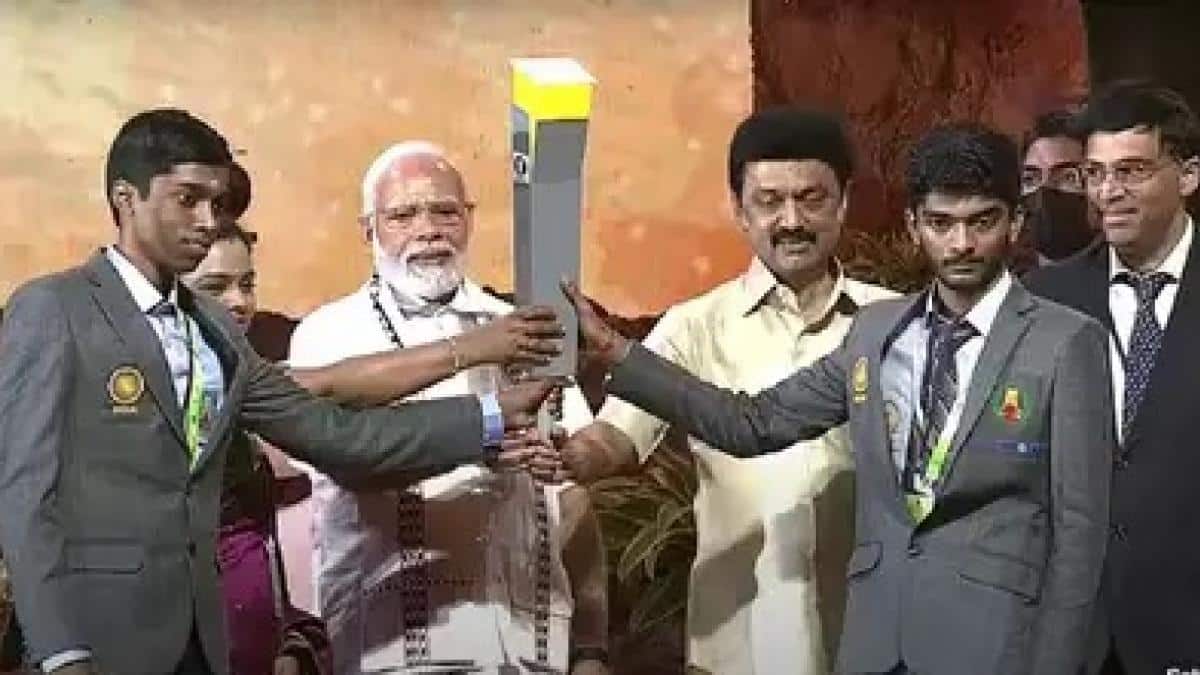 PM Modi said on this occasion, ‘I welcome all of you to the 44th Chess Olympiad. The tournament has been organized in the house of chess. This is a very important time for our country. Friends, I would like to congratulate the organizers of this tournament. He has made great arrangements in a very short time.

He further said, ‘This game has always been considered divine, the place where it is taking place is the fittest. God also played the game of chess. Tamil Nadu has a deep and historical connection with chess. Tamil Nadu is the powerhouse of chess for India. It has given birth to the world’s oldest Tamil language as well as many grandmasters.

The PM said, ‘Two years ago the world started fighting the biggest epidemic of the century. In times like these, every tournament gave us a message that we are strong. The post-Covid period has emphasized the importance of physical and mental fitness. Encouraging sports talent and infrastructure is going to be important.

He said, ‘There has never been a better time for Indian sports than this. We have won in Olympics, Paralympics, where we didn’t win earlier. Today we are organizing 44th Olympiad in India. Thousands of people are expected to participate in the 22nd Commonwealth Games to be held in Britain. No one is a loser, all are winners of the future. Best wishes to all the participants. Simultaneously, Prime Minister Narendra Modi announced the inauguration of the 44th Chess Olympiad.

Tamil Nadu Chief Minister MK Stalin said, ‘Today is a day of great pride for India. We are honored to host the first Chess Olympiad. We all know that the Prime Minister is fond of chess. Even during his tenure as the Chief Minister of Gujarat, he had organized a chess tournament.

Grandmaster Viswanathan Anand handed over the torch of Chess Olympiad to CM MK Stalin. The CM later dedicated it to chess players R.K. to illuminate the cauldron of 44 Chess Olympiads. Handed over to Pragyananand, Lokesh and Vijayalakshmi.

Sports Minister Anurag Thakur said, ‘Hosting this event in a span of three months was not easy, but India has done it. India welcomes all teams from all over the world. The game is getting stronger in India.

Tamil culture, heritage, traditions and sports culture are being showcased well in the ceremony.

All eight forms of Indian classical dance, Kathak, Odissi, Kuchupudi, Kathakali, Mohiniattam, Manipuri, Sattriya and Bharatanatyam have been performed. The people present at the function were mesmerized by the dance of the artists.

For the first time the Olympiad is being held in India and record players are participating in it. There will be 188 players in the open category and 162 players in the women’s category. Its torch relay has reached Mamallapuram in the last 40 days passing through 75 cities. In the tournament, three teams of India will enter in the open and women’s categories. The great chess player Viswanathan Anand is not playing but will be in the role of mentor to the players.

The Tamil Nadu government has given tremendous publicity to this tournament. Dressed in traditional Tamil costumes, cutouts of the Olympiad’s mascot ‘Thambi’ were put up at various places. The Olympiad was to be held in Russia, but was stripped of its hosting after Russia’s military attack on Ukraine. Chess experts, including Anand, believe that its event will further increase the popularity of chess in Tamil Nadu.

On the other hand, Pakistan has withdrawn its name from the 44th Chess Olympiad. The torch of the Chess Olympiad had passed through Kashmir, due to which Pakistan has decided to withdraw from the event in a rage. Pakistan’s Foreign Office spokesman Asim Iftikhar informed about this decision through a statement given to Radio Pakistan.

Terming Pakistan’s decision to withdraw from the Chess Olympiad as extremely unfortunate, the Ministry of External Affairs said on Thursday that it was surprising that Pakistan suddenly decided not to participate in the Chess Olympiad, especially after its team reached India.

When asked about Pakistan’s decision to withdraw from participating in the Chess Olympiad, Foreign Ministry spokesperson Arindam Bagchi told reporters, “It is very unfortunate that Pakistan politicized the prestigious international event.” He said that surprisingly, Pakistan suddenly decided not to participate in the Chess Olympiad, especially after its team reached India.