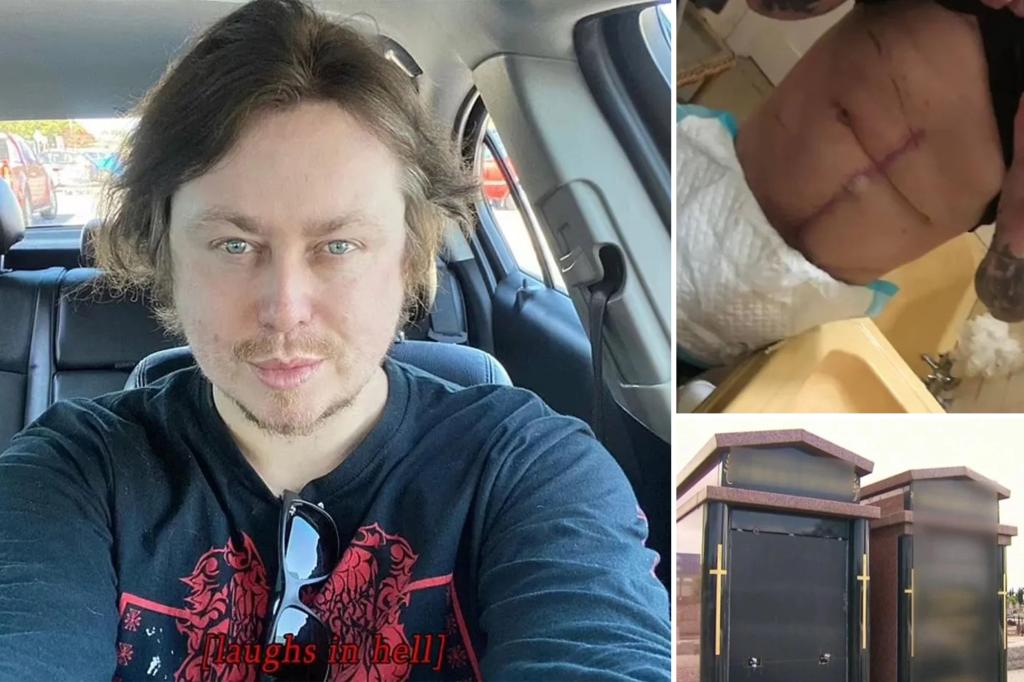 Ghoul, possessed by Satan, is charged with desecrating two graves from which he allegedly stole human heads.

Uber driver Tristan Hearn, 40, from Melbourne, Australia, is also believed to have buried some of the remains outside his apartment.

Hearn was arrested in March 2022 after police reportedly found a stolen human skull in his bedroom.

Officers then found another in the garden of a property he shared with flatmates in a suburb of Spotswood, the Herald Sun reported.

Police say the human heads were torn from the mausoleums in two separate incidents at Footscray General Cemetery between January 27 and February 1, 2022.

Police confirmed that Hearn allegedly left several items at the scene, including candles, a crucifix, and notes to Satan.

“There is nothing at this stage that indicates satanic rituals or connections,” police told Daily Mail Australia on February 3 after petrified residents suggested the thefts were linked to satanic rituals.

More details about Herne have now surfaced, including his obsession with creepy photography and his extensive collection of satanic and gruesome tattoos.

Prior to his arrest in March, the driver had posted online images of skulls, vampires and zombies on his social media accounts, including his Facebook page.

Various photographs uploaded by Hearn to the platform appear to have been taken from several Melbourne cemeteries, including a series of images taken from Borundara General Cemetery in Kew in May 2020.

Another photo shows a man dressed as the Grim Reaper posing near tombstones.

In another post, Hearn allegedly described the grave as “Beautiful, charming and very special.”

According to Daily Mail Australia, Herne’s fingers are marked with two different symbols: the Leviathan Cross, commonly known as the Cross of Satan, and the Sigil of Lucifer.

Hearn has an elaborate tattoo of American serial killer and sex offender John Wayne Gacy dressed as a killer clown on her left arm.

Gacy was found to have raped, tortured, and murdered at least 33 young men and boys, and frequently acted as “Pogo the Clown” or “Patch the Clown” at children’s hospitals and at fundraisers.

Hearn is charged with six crimes, including two counts of removing body parts from a human corpse, exhuming or removing human remains from a burial site, and criminal mutilation.

Prominent criminologist Xanthe Mallet said she was puzzled at the time as to why Hearn desecrated and stole human remains.

“I haven’t seen precedents where graves were robbed for any other reason than in the past — grave robberies used to happen when bodies were taken and provided for anatomical reasons — but we’re talking hundreds of years ago,” she said.

Hearn will appear in court again in August.

The removal of body parts from a grave carries a maximum penalty of five years in prison.

This story originally appeared on The Sun and is reproduced here with permission.

The NYPD Needs Help Finding the Killer of This Black, Caribbean Immigrant