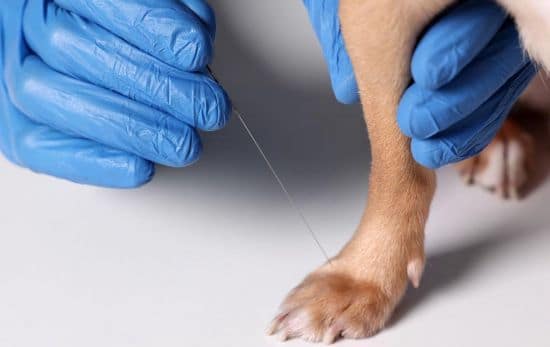 chinese traditional medicine and natural and alternative treatments such as acupuncture They have always been present in animals, although little is known about it. These treatments began to be practiced around the 1st century BCE. C. and the Chinese understood that if the art of placing needles at strategic points to reduce pain had positive results in humans, why not in animals?

“Acupuncture in animals provides the same results that we get in people and in fact the history is very old, as in China it began to be applied to farm animals earlier than to people.” Paula Rodriguez is a Veterinary Specialist Animal Rehabilitation and Traditional Chinese Medicine And for four years he has implemented this method in the Valencian Clinic veterinary stretchof which he is the director.

Rodriguez eats global consumer that the main aim of these treatments is reduce drug use Which can cause side effects in animals suffering from different types of pathology. terms of pain, tumor processesproblems in Joint, Neurological… “You can treat any clinical picture with acupuncture sessions,” confirms this veterinarian.

integrative medicine Combines Eastern treatments with Western ones. an example of this herbal medicineSpecial interest in the treatment of patients with ethological, dermatological or oncological problems. This includes administration Chinese herbs and plants Powder, capsule or tablet to ensure the ingestion of the animal, always under the prescription of a specialized veterinarian.

“It has reduced epileptic seizures in my pet”

Andres Sancho, along with his 9-year-old Labrador, decided to turn to traditional Chinese medicine to treat his problems osteoarthritis, “Today I don’t give her any chemicals from traditional medicine, we only treat her with acupuncture,” Sancho tells this medium. What surprised this owner the most about acupuncture was that her pet’s epileptic seizures were significantly reduced.

“My dog ​​gets about six attacks a year, but this last one – in which we resorted to acupuncture – has only had one episode. I don’t know if it’s because of the acupuncture, but it’s the reality,” says Sancho. Joe also recommends this technique because “there is no placebo effect like in people and when my dog ​​goes to a session I see him much better and more relaxed.”

Veterinary Clinical Hospital of the University of Alfonso X El Sabio Leading in Spain in offering various disciplines of Traditional Chinese Veterinary Medicine. “When other areas of the hospital find that an animal is heavily medicated or traditional methods are not sufficient, they refer the case to the integrative medicine service,” Ana Del Moral, a professional at the center, told this outlet.

“With acupuncture we manage to treat the animal completely and several problems can be addressed at the same time,” he says. This technique, which is based on the insertion of fine, flexible and sterile steel needles at specific points on the animal, “helps the body itself produce substances that improve the animal’s quality of life.” acupuncture stimulates different neurotransmitter like beta endorphin And this serotonin“In this way, the body itself can heal the pet’s problems,” adds this vet.

Not suitable for all cases

Although naturopathy can be applied to any type of patient, osteoarthritis treatment in older animals and those with neurological problems are also most common. As the argument goes, Not all animals tolerate acupuncture well, “There are some dogs that are more nervous and very stressed with which the relaxation effect cannot be achieved,” admits Paula Rodríguez from Vibra Veterinaria.

Faced with the misunderstandings, especially at first, that these techniques can create in pet owners, Ana del Moral defends that animals “not only let themselves go, but eventually they know that What they are going to do, they generate. endorphin and the sense of well-being with which they rest. “Sometimes people are not happy, there are even cases in which they come as a last option, but it is very encouraging to see the positive results that are produced.”

The type of treatment, as well as the time frame, depend on each case. “At first, they usually do three or four sessions a week and after a month they can be spread to once a month, for example,” says Paula Rodríguez from Vibra Veterinaria. At his clinic, each session costs 25 euro and usually stays between 15 and 45 minutes,

In the case of UAX Veterinary Hospital, the price of the sessions is 60 euro“Although we offer bonuses with which each intervention remains around 50 euros,” concludes the veterinarian Ana del Moral.

You read this global consumer content curated by our writing team and experts. If you want free access to all the content we produce, we recommend you subscribe. Plus, you can get free legal advice just for being part of our community.