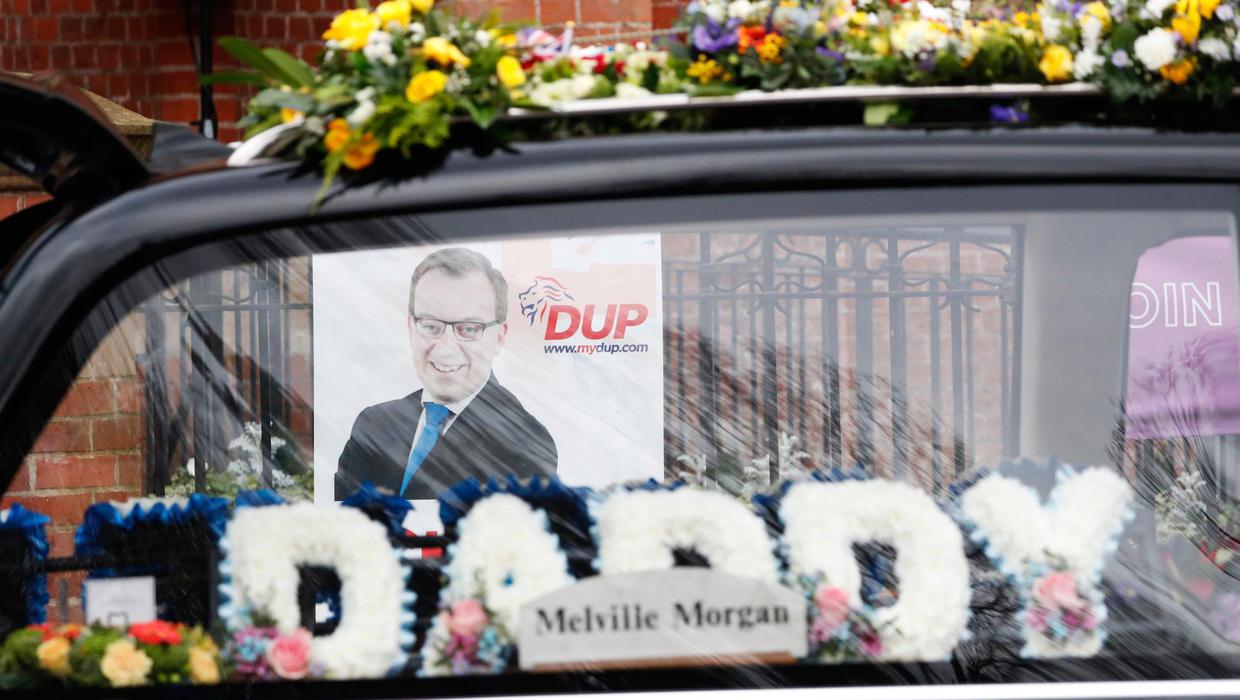 The funeral of Christopher Stalford on Saturday afternoon heard of the DUP politician’s love for his wife and family.

Trinity, Oliver, Cameron and Abigail, they were the apple of his eye. He just loved being with them,” Rev Marty Gray told the congregation.

“Christopher died very suddenly last Saturday night. He took unwell and despite the best efforts of two teams of paramedics he passed away,” the service heard.

“The next morning, that was a testament of how much of an impact his faith and Laura’s faith had on their family.

“Because after Laura broke the news to the children, Cameron said: ‘Will we pray now?’. And all four children prayed.”

Mourners were also told of how Mr Stalford and his wife Laura were married by former DUP leader Ian Paisley.

“Reverend Paisley was in a meeting with Tony Blair the day he married them and left early because in his words, he had a special couple to marry.

“Christopher and Laura had known each other since they were young children.

“He was her best friend and she was his and they have been that way ever since.

“When he was 16 years old, he, having tortured Laura for quite a while, Laura eventually agreed to go out with him. Their first date was to a local fish and chip shop where Christopher, in his calamitous way, managed to get red sauce all over Laura.

“But that didn’t put her off.”

The Belfast church heard a vivid picture of the couple’s married life and long walks home because “frugal Christopher” avoided paying for a taxi.

Mourners from across the political spectrum gathered in Belfast on Saturday for the funeral service of the late DUP MLA.

DUP leader Sir Jeffrey Donaldson, alongside party MPs and MLAs, were among the congregation at Ravenhill Presbyterian Church in south Belfast.

Representatives from Sinn Fein, the SDLP, the Alliance Party and the Green Party were also in attendance.

A crowd gathered outside the south Belfast church on Saturday to pay their respects to the DUP representative.

Sir Jeffrey said earlier that his party was devastated by the loss of “our dear friend and much loved colleague”.

Describing him as a loving husband, father and son, Sir Jeffrey said first and foremost their thoughts and prayers are with Mr. Stalford’s wife Laura, their four children and wider family.

In a statement, Mrs Stalford and the wider family thanked everyone for their kind messages, which they described as having been a comfort at an incredibly sad time.

The service also heard of Mr Stalford’s love for his south Belfast community.

“He was proud of being from down the road, not up the road.

“When he went canvassing for the South Belfast seat he made sure everyone knew where he went to school so they could be sure he was a south Belfast boy through and through.

“One night for art homework at Wellington College he was asked though to draw a picture what he saw outside his bedroom window.

“All he could see where the roofs of terrace houses. So he got drawing.”

Rev Gray added that Mr Stalford’sstep-dad Eric was “amazed” at what the young man drew.

He continued: “Not at how good Christopher’s drawing was – but of the fields and sheep that Christopher had drawn.”

Mr Stalford was not averse to causing trouble, Rev Gray recounted, even when at school.

Rev Gray recalled how when his school made a decision not to sell poppies for the Royal British Legion anymore, the young Christopher was outraged.

So he bought a box of poppies with his own money and “handed them out as gifts” at school.

“He was able to get around it by being clever, by being political.”

The reverend reminded the congregation that Mr Stalford had a childhood “marked by tragedy”, after his father died when Christopher was just seven years old.

Mr Stalford, he said, was a Christian man who had “so many ambitions for the future”.

Outside the church, constituents and locals gathered to say goodbye.

They watched as seasoned politicians wiped away tears and hugged each other at the church entrance.

Dozens lined the road as the cortege moved away, with the city’s iconic Samson and Goliath cranes visible in the distance.

Pauline and Doreen, two friends, were among the crowd.

They knew the family, the pair said, and Mr Stalford was a great representative for the community.

“He was an amazing fella,” Doreen said.

“He was a strong, articulate and consummate performer,” Mr Humphrey said.

“He was unique, a true character with a huge intellect, an acerbic wit with an infectious laugh. He was a man of considerable talent.”

He further said Mr Stalford probably developed his passion for politics “in the pram”.

Recalling how he joined the DUP as a teenager, Mr Humphrey said that Mr Stalford was “totally committed” to the party.

“We are all devastated by his passing. Our world is the poorer for Christopher’s passing.

“We have lost a most able and valued colleague. Stormont has lost a brilliant parliamentarian. Unionism has lost a great advocate. South Belfast, an exceptional representative. And Northern Ireland, a proud and visionary son.

“However, our loss is nothing to the immense loss his family will feel today.”

Paying tribute to Mr Stalford in the Assembly earlier in the week, Mr Humphrey had also said that the south Belfast MLA “was like a wee brother” to him.