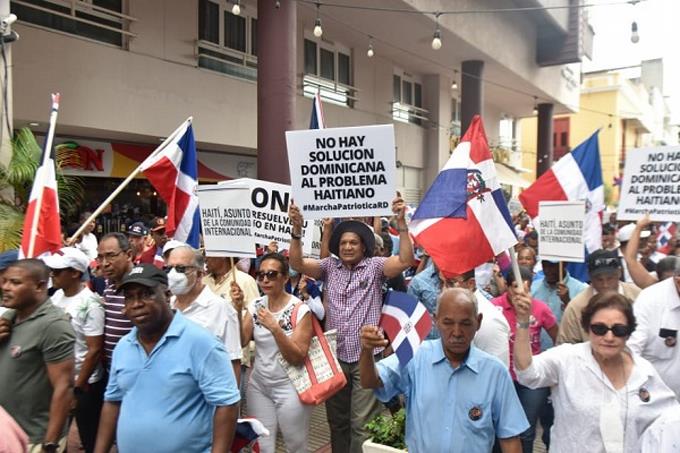 International partnerships, agility in building The wall between the Dominican Republic and Haiti, Compliance with the Dominican Labor Code and the application of immigration rules were part of demands raised by dozens of Dominicans. “Patriotic March” of this Saturday.

During the activities, organized by the Duartean Institute with the support of a group of institutions and personalities, “Patriotic Manifesto of 6th August 2022”, in which the above request and many others are collected “to findThe solution to Haiti’s problem in Haiti.”

According to the president of the Duartean Institute, Wilson Gómez Ramírez, it is imperative to stabilize Haiti, as he believed it to be an “invasion and occupation escape” from a “migration phenomenon”.

Gómez Ramírez, who was in charge of reading the manifesto, requested “Greater speed, transparency and effectiveness in wall construction Or technical physical fence on the border”.

He also requested, on behalf of those present, the application of 80% of Dominican labor in the country’s economic activity, an ordinance established in the Labor Code.

the third point was “Strict and fair” compliance with immigration regulationsIn the situation the “continuous repatriation of foreigners”, followed by the fourth which “calls for the adoption of all measures and measures so that, in accordance with the reality stated above, the armed forces are taken in sufficient numbers.” the demands of the present circumstances, For border controls to prevent returnees from returning and new illegal intrusions, at a cost and with the necessary rigor in the case, until the construction of the wall is completed and effective technical mechanisms are put into practice which guarantee supervision. ,

The fifth proposes that “the Ministry of Education shall comply with Article 63, Issue 13 of the Constitution of the Republic, which is obligatory” to make citizens aware of their rights and duties, in all public educational institutions and private, directives. Social and civic education, education of the constitution, fundamental rights and guarantees, national values ​​and principles of peaceful co-existence will be mandatory.

Other claims were regarding compliance with Article 10, Issue 2 of the Supreme Criterion, which establishes that “the regime for the acquisition and transfer of real estate property in the border area shall be subject to specific legal requirements that privilege Dominican property.” and the national interest”, “adopting a highly restrictive policy”, as well as “careful” review and supervision of the civil registry, Aliens Book.

In the end he proposed “A great global diplomatic offensive, Incorporated, a comprehensive exercise of public and civil diplomacy, with written, rigorous guidance and integration of norms before embassies, parliaments and international organizations, with true historical material about Dominican-Haitian relations and socioeconomic, demographic and environmental data who support our legitimate and just. claims.”

The Department of Labor reports that US inflation eased in August