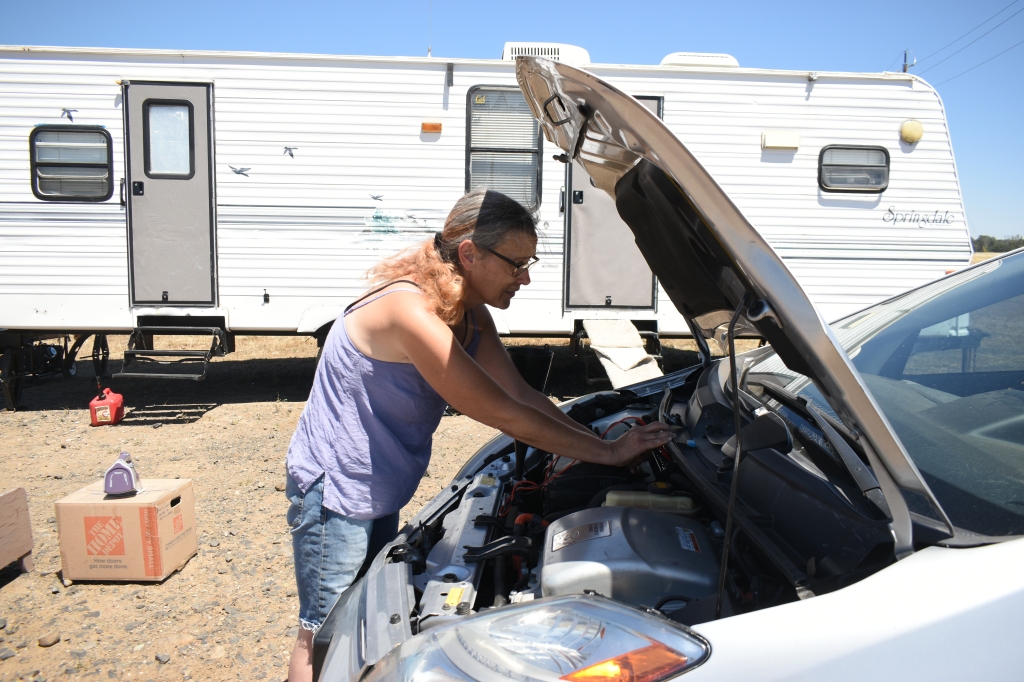 “It was a bit slow because of the difficult terrain in getting our instruments to join the space and clear the debris,” Hahn said.

Hahn said the city has yet to decide on the next area of ​​enforcement, though staff are in discussions for the next possible locations.

“We expect to clear the area in the next day or two and only then can we start the next chain of notices,” Hahn said.

On a one-acre site with two portable bathrooms and sinks, on the northwest corner of Cohasset Road and Eaton Road, Ferman Ramirez sat inside his RV. He has to leave by 5 pm that day.

“A friend of mine runs Matador Motel. He said I can park there for two weeks but I can’t stay there. So I had to look for $300 to get it out.” Ramirez said. “I have to go or else I’ll get the ticket. I already have $400 owed, so one more ticket on top will suck. And then gas.” And with the price of food?”

At the northwest corner of Bruce Road and Humboldt Road, Heather Salvador was fixing her car, which was parked right next to her RV, in which her brother lived, which she said was in a car accident. The latter remains physically handicapped. Salvador also had until 5pm to transfer his RV.

“I’m going to Chico’s Trailer Haven, but I have to come up with $1,700,” Salvador said. “We applied for In-Home Supportive Services – it’s pending, but I’ve been on top of it. I’m not a layer. It’s not like I’m trying to be here forever.”

Salvador said that trailer parks will not house many of the trailers that are more than 20 years old.

“Mine are fairly new and look quite nice, so it’s not really a problem, but most of them are no more than 10 years old and certainly not 20 years old,” Salvador said. “Mine is 2002 so there it is. And if they make an exception, they want to at least make the trailer look good.

As of June 15, 113 people are living in a pallet shelter that can fit up to 177 people, said executive director Amber Abney-Bass.

At the Torres Shelter, 83 people are living in a space that can accommodate another 177.