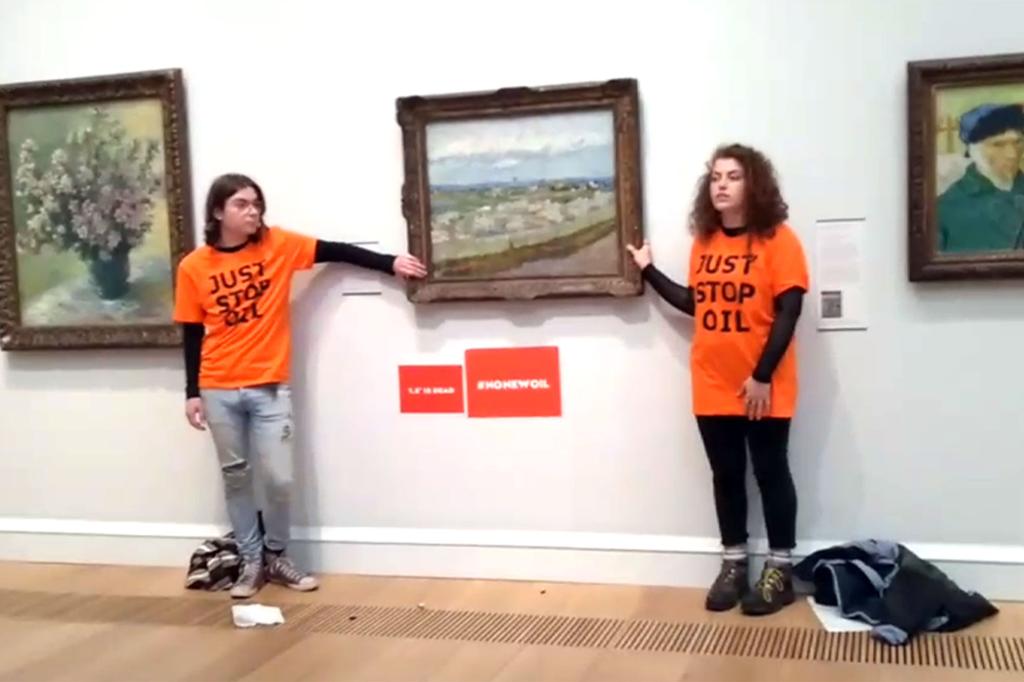 British climate activists have stuck their hands on the frames of three prized works of art – including one by Vincent van Gogh – in three separate incidents this week to protest the United Kingdom’s environmental policies.

The stunts, backed and organized by the Just Stop Oil group, came after warning world leaders at this week’s G7 summit in Germany not to take meaningful action against climate change.

On Wednesday, members of the group attached themselves to McCulloch’s “My Hearts in the Highlands” at the Kelvingrove Art Gallery and Museum in Scotland, according to STV News.

Protesters also sprayed the logo of the climate group in orange on gallery walls and floors. According to the report, three women and two men have been arrested.

The next day, a man and a woman affixed themselves to Van Gogh’s 1889 painting “Peach Trees in Blossom” and were confronted by police, according to footage shared by Just Stop Oil.

“The directors of the arts institutions should call on the government to immediately close all new oil and gas projects,” 21-year-old Louis McKennie said in a statement on the group’s website. “We are either in resistance or we are participants.”

Emily Brocklebank, 24, said: “Billionaires queuing up to nurse at food banks are getting richer, millions of people worldwide are starving and half the world’s population is exposed to extreme threats from heat, floods, fires and famine ”

“Meanwhile the art establishment, politicians and fossil fuel companies look the other way.”

And on Friday, two other advocates attached themselves to the frame of Turner’s “Tomson’s Aeolian Harp” at the Manchester Art Gallery, the group said.

According to The Guardian, art protest campaigns followed several disruptions at football matches to bring attention to the group’s cause and mass blockades to disrupt the transport of oil in England.