Column: Chicago Bears give Braxton Jones a look at the left tackle – and the rookie is ready to fight for a job in the camp 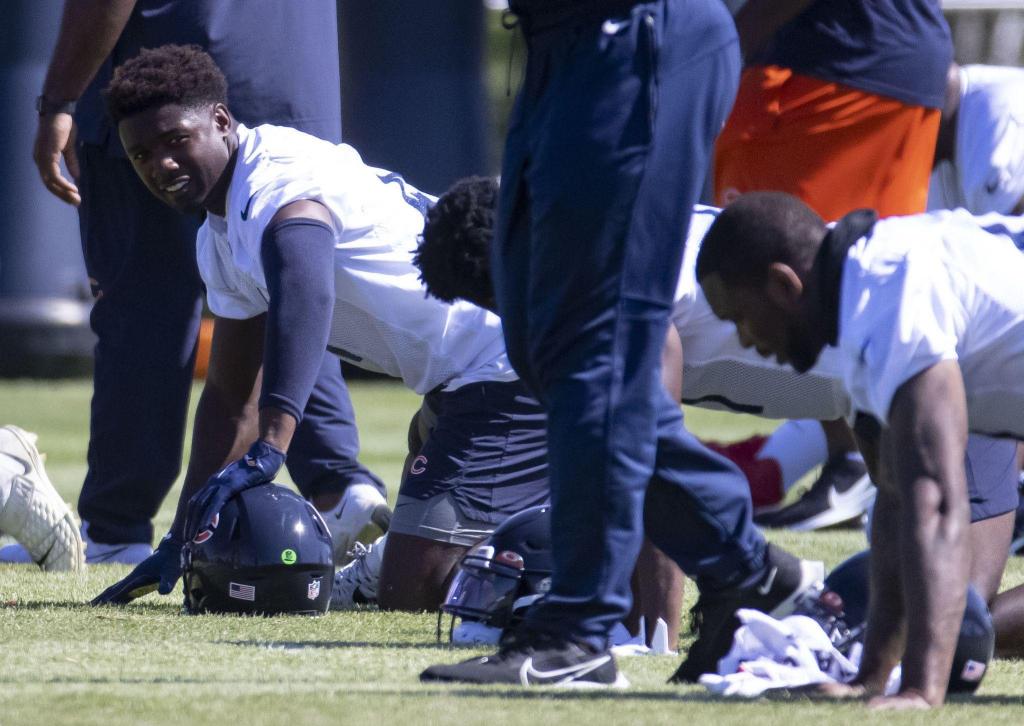 Coach Matt Eberflus was quick to point out that the Chicago Bears spent the spring mixing and matching players in various positions when asked about Braxton Jones’ starter earlier this month.

Indeed, the Bears have been shuffling the roster in a couple of places, but Eberfluth and the Bears certainly understand why the focus is on the offensive line, general manager Ryan Poles spoke of the improvement when he was hired.

If you handicap the field with a left tackle before the team opens training camp on July 26, that day the veterans will be at Halas Hall, Larry Borom and Jones are the leading candidates. Borom, who was drafted in the fifth round last year, spent the offseason in both tackle positions, with Jones showing up as an option.

“I’ll be honest with you, I was definitely a little surprised,” Jones said of his reaction when told to run with the starters. “That surprise passed quickly. It’s been thrown at me and it’s time to go. It was very helpful for me to get that kind of speed, the kind of speed you can play against guys like Roquan Smith. It’s crazy, you know. It certainly was valuable.”

Whether Jones will be able to try out as a left tackle when training camp opens remains to be seen. The real appreciation of a game in the trenches begins when the stocks are coming, but the Bears needed to see something in Jones to look at him.

Eberflus, offensive coordinator Luke Getsy and offensive line coach Chris Morgan have a lot to figure out. They swapped Sam Mustifer and Dakota Dozier for right-back, but Dozier was pulled away on Tuesday for what a source said was a left knee injury. Borom and Teven Jenkins, who were drafted in the second round a year ago, started with the right tackle. Ultimately, the organization must identify its top five linemen and figure out how they fit.

Perhaps the Bears were intrigued by one of the compounds they have used so far. Or there could be a whole new lineup they want to explore in training camp, but Jones is keen to show up next month and fight.

“I assume things will be different,” he said. “Despite the fact that we have good results now in terms of speed with midfielders, you don’t necessarily get bullish pressure. You won’t get someone right in your face. It will change a lot, and from now until July 22 when I return, it will be a huge event for me. I have to win the guys’ positions. I must become stronger.

“A fifth round guy, but it doesn’t matter. I have an opportunity here and it’s a great opportunity to win over some of the guys. I have to get stronger, faster, all that, sharper in the tutorial. It’s very important to me that when I go home I have a plan, and I do have a plan, to make sure I follow that plan.”

In the spring of 2021, at 6’5″ and 310 pounds, Jones came to the attention of Senior Bowl staff. Senior Bowl chief executive Jim Nagy said three of his employees went to evaluate Jones during his senior season in Southern Utah to confirm what they saw on tape. Some believe that Jones’ junior results were better than last season and that may be why he stayed on the board on Day 3.

“There is talent,” said Nagy. “He is a really nervous athlete. Passes, redirects, he looked like an NFL left tackle on his junior record. We were really high on it.

“The most important thing is just the development of the lower body. He needs to get stronger in the lower half, which will come with time. If that’s the only thing you need to improve, then NFL teams are happy with it. It’s hard to make a guy longer or twitchier. You can always give them volume or strength.”

Jones said that Morgan emphasized the need for him to be more efficient and consistent with his hands in order to take advantage of his 35⅜-inch hands.

“The biggest thing about my transition from college to the NFL or from college to the Senior Bowl in the NFL and just these OTAs is throwing hands,” Jones said. “I had very reserved arms in college and didn’t use my long arms to my advantage. They are very important to me and they will help me to be a really good player in this league. They got better.”

Ned acknowledged that it’s unusual for linemen to make their way to the starting role for Day 3 offense rookies, especially in the left tackle, and Jones has a long way to go before the first week to get the job.

“I’m not entirely surprised because he has that kind of talent,” Nagi said, noting that Jones excelled in one-on-one passing drills during Senior Bowl week. “He definitely has the talent of a starting player. Did I think he would make it to Year 1? Probably no.

“It’s hard with the big guys when you’re not in the pillows. This forum sets Braxton up very well because he is such a good athlete and he can come out and dance with you in pass defense. You should put on pads in August and see how it all shakes up.”

It remains to be seen if Jones can put himself in the position to play in his first year, but the Bears have a prospect worth spending time on. The Poles could start an attacking line well.

Shrinking in size, growing in game, Timberwolves’ Naz Reid believes ‘sky is the limit’ for his future

Two INTA developments are awarded: in plant protection and in animal health