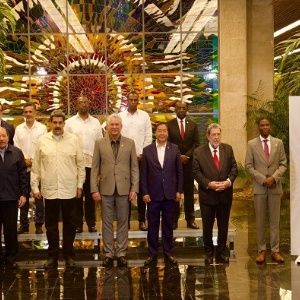 The Heads of State and Government of the Bolivarian Alliance for the Peoples of Our Americas – Peoples Trade Treaty (ALBA-TCP) reaffirmed their commitment to strengthen this mechanism as a means of uniting their peoples.

Felix Placencia of Venezuela has been appointed Secretary of ALBA-TCP

Following the XXII ALBA-TCP summit, held on Wednesday in Havana, Cuba, they issued a 22-point declaration to celebrate its 18th anniversary of “unity and commitment to Latin American and Caribbean integration”.

The text specifies, “We reaffirm the commitment to strengthen ALBA-TCP as an instrument for the union of our peoples, based on the principles of solidarity, social justice, cooperation and economic complementarity.”

The officials highlighted the actions to develop the revitalization of ALBA-TCP “as a mechanism for association” to fight for peace, democracy, stability and the well-being of the people of our Americas.

The declaration of the XXII ALBA-TCP summit calls for the Govt. Change in its hostile policy towards the United States #cuba, the immediate and unconditional end of the economic blockade, the end of subversive actions and the issuance of fake and arbitrary lists of state sponsors of terrorism. https://t.co/DMO5Ypn3Dr pic.twitter.com/71Oh4QDwyP


In addition, they highlighted the need to strengthen the Community of Latin American and Caribbean States (SELAC) as a mechanism for dialogue and political settlement made up of “the 33 states of our Americas based on the principle of unity in diversity”. .

At another point, he reiterated that he would remain committed to the development and well-being of nations, the defense of sovereignty, as well as the rejection of external interference in Latin America and the Caribbean.

“We reject destabilizing schemes and actions promoted by powerful external actors and national oligarchies that seek to succeed or ignore the will of the peoples of Latin America and the Caribbean, democratically and legitimately expressed in elections,” the statement said. Let’s try.”

The authorities also condemned the use of unconventional warfare strategies against the region’s democratically elected governments and leaders through judicial harassment or legislation to “destroy political and ideological rivals”. In view of this, he rejected politically motivated legal actions against Argentine Vice President Cristina Fernández de Kirchner.

Likewise, they demanded an immediate and unconditional end to the economic, commercial and financial blockade by the government of the United States of America (USA); Ending subversive, illegal, and covert operations, as well as ending that country’s inclusion on the “State Department’s Fake and Arbitrary List of State Sponsors of Terrorism.”

Likewise, he expressed his support for President Luis Arce and his efforts to destabilize the Bolivian people; He expressed his solidarity with President Daniel Ortega and the people of Nicaragua affected by the draconian measures implemented by the United States, as well as with the Peruvian people “affected by a serious prolonged institutional crisis, which generated a series of events”. is a threat to the stability and well-being of the majority”.

On the other hand, he congratulated the people of Grenada, Saint Kitts and Nevis and Dominica on their respective election days, which he described as successful.

“We support the right of Caribbean countries to receive fair, special and differential treatment, and we express our support for their just claims and damages caused by Native genocide, colonialism and slavery,” the statement said. confirm.”

Another point involved his greeting the signing of a second partial agreement between government delegations and the South American country’s opposition to protect the Venezuelan people. Also, the resumption of peace talks between the Colombian government and the National Liberation Army (ELN).

At this meeting, Venezuelan Ambassador Félix Plascencia was also appointed as the new Executive Secretary of ALBA-TCP and thanked Sacha Llorenti for the work done while in office.

Prior to the summit, presidents and prime ministers attended an extraordinary session of the National Assembly of the Popular Power of Cuba to commemorate the 18th anniversary of the alliance.