Create holograms, measure time and perform computer surgery, all in one night 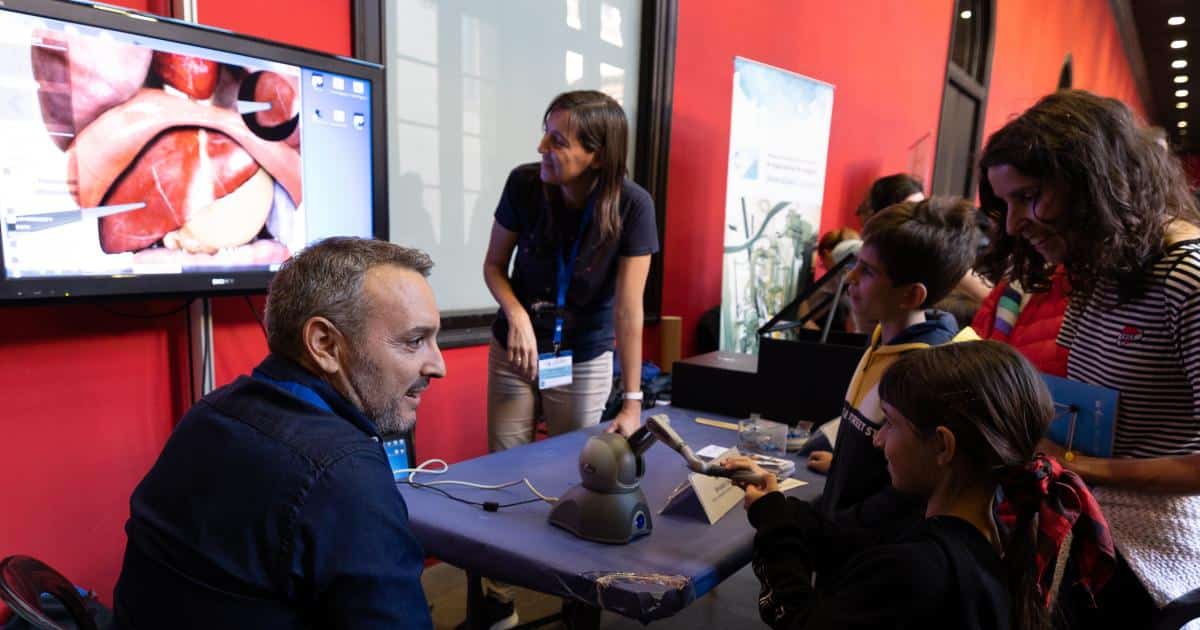 More than 5,000 people have participated in 90 activities, with scientific walks, talks and experiments Organized in the framework of the Evening of Researchers by the University of Zaragoza. The annual event serves to bring science out of the labs to the streets and bring it closer to citizens, especially the little ones.

A total of 180 researchers, most of whom are women, 116 in total, have shown their projects. In the exhibitions held last Friday afternoon at Plaza de Navarra and Huesca Casino; With various scientific walks and visits to the Natural Science Museum in the Plaza del Torico and the Provincial Museum and Auditorium of Teruel and in the streets of Zaragoza.

In field of use Of the three cities, scientific staff have used essays, performances or games to encourage active participation of the public in understanding economic processes, Pretend to be a surgeon or forensic surgeon, create holograms and virtual characters, understand the paradoxes of the structure or perception of macromolecules, measure time, See what we don’t see in a painting, Assess geological heritage, Observe microorganisms and bacteria, Understand electricity, How a secret code or robot works, Carve out a monotype, Simulate the mechanics of fluids does, Visualize the digestion process or contamination processes, learn our physical condition or play with math.

The talks at this year’s European Night of Researchers have allowed attendees to address topics ranging from cancer diagnosis and treatment and other diseases for the architecture of smart cities, going through the circular economy, food and the origins of what we eat, vehicle recyclingphilosophy and robots, speech technologies, everyday mathematics, stillness, cosmic rays and stars, eternal youth, sound arts and virtual environments, crafts, the language of nature Or the educational possibilities of documentary cinema, listed by the university in the balance of the meeting.

In Huesca, there have also been various talks: how the earth, the layer beneath our feet, sustains our future; Chemical elements come from stars, There are many model plants that serve as toolboxes for experimentation to improve that future; Social sciences help us understand the dynamics of consumption that is detrimental to health; Physical exercise contributes to eternal youth And gods and robots, philosophy and technology are closer than we think. But these ideas have also been used to maintain soil health, to travel inside a plant, to taste blindly through sensory stimulation, or to play with math in the street.

The Teruel capital, meanwhile, emphasizes that It is necessary to consider war conflicts from art, by using different sound scenarios that allow the space to be carved. Art has also brought viewers closer to new forms of interaction with the virtual world, and shown dialogue between the real and the virtual, as well as between craft and technology. Similarly, it has been shown how this virtual reality focuses on health with hope. and in practice it is possible Experiment with geological heritage using artistic engraving techniquesIn addition, the fluid dynamics was shown through computational systems.

In the Paraninfo of Zaragoza it was possible to enjoy experiments, scientific walks (mathematical, geological and architectural) around the city, short conversations, children’s games, a The ‘escape room’ of linguistic intercompression (UNITA project), a visit to the Museum of Natural Sciences, the delivery of milk teeth to the mouse Pérez to collaborate with an investigation with CENIEH (Burgos); Dramatic conversation by Santiago Ramón and Cajal and Andressa Casamayor (represented by actors JJ Sanchez and Encarni Corrales) with researchers Alberto Jiménez Schumacher and Raquel Villacampa, respectively, among many other activities.

The event concludes in Zaragoza with a performance by a group of stand-up researchers RISAarchers In the Paraninfo room presented by Encarni Corrales, David Angullo and Marisol Azner from Oregon TV, which premiered with a monologue by the rector of the University of Zaragoza, Jose Antonio Mayoral, professor of organic chemistry, along with other collaborators. Attending the previous Unizar Scientific Monologue Workshop in collaboration with the Spanish Foundation for Science and Technology (FECYT) of the Ministry of Science and Innovation.