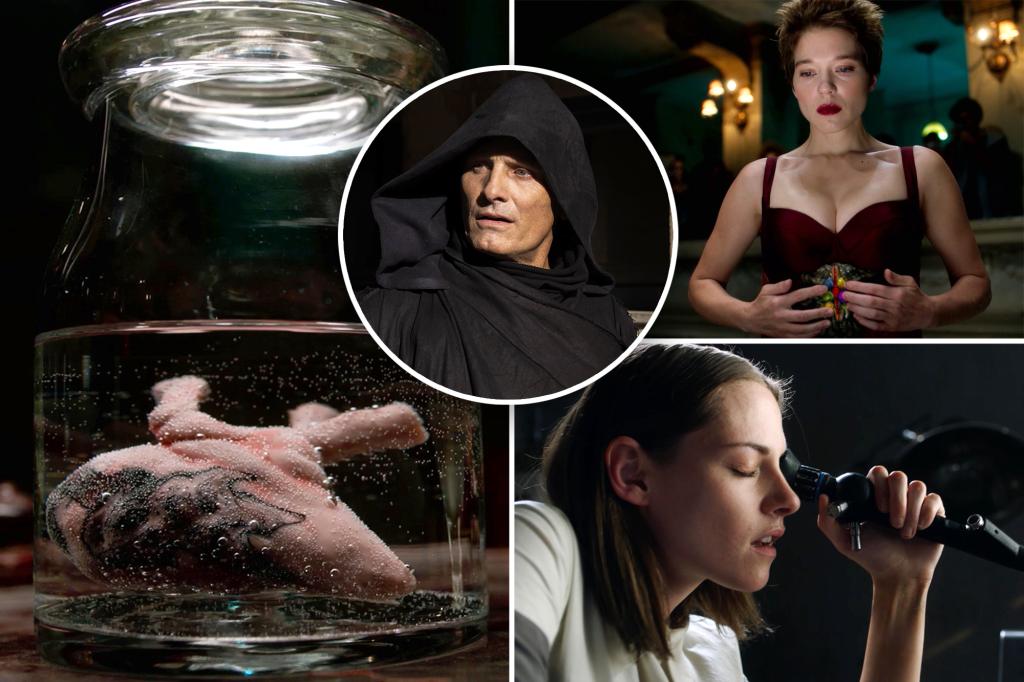 “Maybe” is correct. His latest shocking film begins with a mother suffocating her 8-year-old son with a pillow, and becomes one of the lighter scenes of the evening.

Later, during the many gruesome surgeries shown, the audience’s hands flew off the screen to shield their faces from blood, organs and intestines. I was sitting in the front row, which was practically a splash zone. The two confused, whispering, screaming women next to me certainly got lost on their way to “Top Gun: Maverick.”

Can’t blame them. Cronenberg’s distorted vision of what’s to come makes the technological apocalypse of “Terminator” look like a Build-A-Bear workshop.

The human body, we learn, has evolved chaotically and has begun to develop aggressive, non-functioning organs. Due to the changing world, a large part of the population has switched to eating and metabolizing plastics. People no longer feel pain or suffer from illness (great!), so the new kink of many people is biting each other on the side of the road as a replacement for sex (barf!).

Borrowing a page from the singing strippers of “Gypsy” – “You’ll get a gimmick!” – The main characters, Saul (Vigo Mortensen) and Caprice (Le Sedoux), turn uncomfortable developments into the performing arts. The capris will surgically produce a curvy mass from Saul’s person as the live audience photographs. They are hotter than the MCU.

We hope that all these outrageous crimes are meant to satirize the pretend artists of our own world. Perhaps the pale, black-hooded Saul is a stand-in for Tilda Swinton in a glass box at the MoMA or a Banksy drawing cutting himself. However, the tone of the film is consistently gloomy and Mortensen called the film “noir” in an interview.

A stab or two at the humor comes from Kristen Stewart as Timlin, an employee of the small National Organ Registry with her boss Whippet (Don McKellar). Humble and with a much louder voice than Stewart’s Princess Diana, Timlin comically rolls his eyes at Saul as if he’s Harry Styles rather than a freak. After one of his performances, she whispers to him, “Surgery is the new sex.”

Doesn’t get more dystopian than this.

In “Crime,” you laugh a lot more than you laugh. Saul and Caprice lay naked and on an operating table covered with bloody cuts. “Was that good for you?” facial expressions. Saul, who is a medical gimmick, tries to lean his throat down with the help of a chair that keeps his spine and esophagus in proper alignment. Mortensen always swallows while speaking, as if about to vomit.

If you’re not used to Cronenberg’s body horror style, which made him famous in the 1970s with movies like “Shivers,” you might be really vomiting.

When the 8-year-old’s father (Scott Speedman) asks Saul to perform a public autopsy of the child, you’ll be more nauseous. The little boy was a plastic eater, and Dad wants to highlight that humanity has shifted, because the government is trying to hide that fact. They uncover him on an operating table that looks like a giant mummified acorn. The film fades in the end.

The surgical instruments that mix the technique and the living tissue are reminiscent of the director’s 1999 film “EXStainZ”. And Cronenberg’s scenes, even if they are horrifying, are particularly striking.

The trouble is for “Future Crimes”, the audience has to take their eyes off their eyes first to see them.