Cuba and the US hold a new round of migration talks 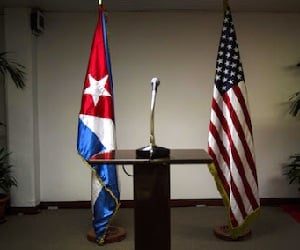 High-level delegations from Cuba and the United States are holding a second round of talks on migration issues in Havana today, a diplomatic source confirmed.

Johanna Tablada, deputy director general of the Cuban Ministry of Foreign Affairs (Minrex) for the United States, said on the Facebook social network that she is participating in migration talks between the two countries today.

noted that The Cuban delegation is led by Carlos Fernandez de Cosio, Deputy Minister of Foreign Affairs, while the US side is led by Emily Mandral, Deputy Assistant Secretary of State Department.

This Tuesday, Cuban Foreign Minister Bruno Rodríguez Parrilla released a message on Twitter in which he emphasized that The holding of bilateral migration talks in Havana is in line with the mutual commitment to promote orderly, legal and safe migration.

Celebration in Havana of the Diaspora Dialogue between #cuba why #america In line with the mutual commitment to promote orderly, legal and safe migration.

On 9 November, senior officials from both countries held talks in Havana on immigration and consular issues.

At that time the Deputy Minister Carlos Fernandez de Cosio stresses the importance of resumption of immigration and consular services at the US Embassy in HavanaIncluding nonimmigrant visa processing.

The meeting in the Caribbean island capital followed the first round of talks on the issue since 2017, which took place in Washington in April this year.

During the exchange, both sides reviewed mutual commitment to comply with bilateral agreements on the matter and guarantee regular, safe and orderly migration.

The closure of US consular services in Havana over alleged health incidents involving its diplomats, which have never been confirmed, was meant to violate existing migration agreements between the two countries.

The diplomatic headquarters of the northern country recently announced that it will extend its services until January 2023.

(With information from Prensa Latina)

Minrex and the US State Department hold talks on consular issues

Powell’s books outlived Amazon. Can he reinvent himself after the pandemic?