Cuba, Diaz-Canal and the tour of failure: what was offered and what was received 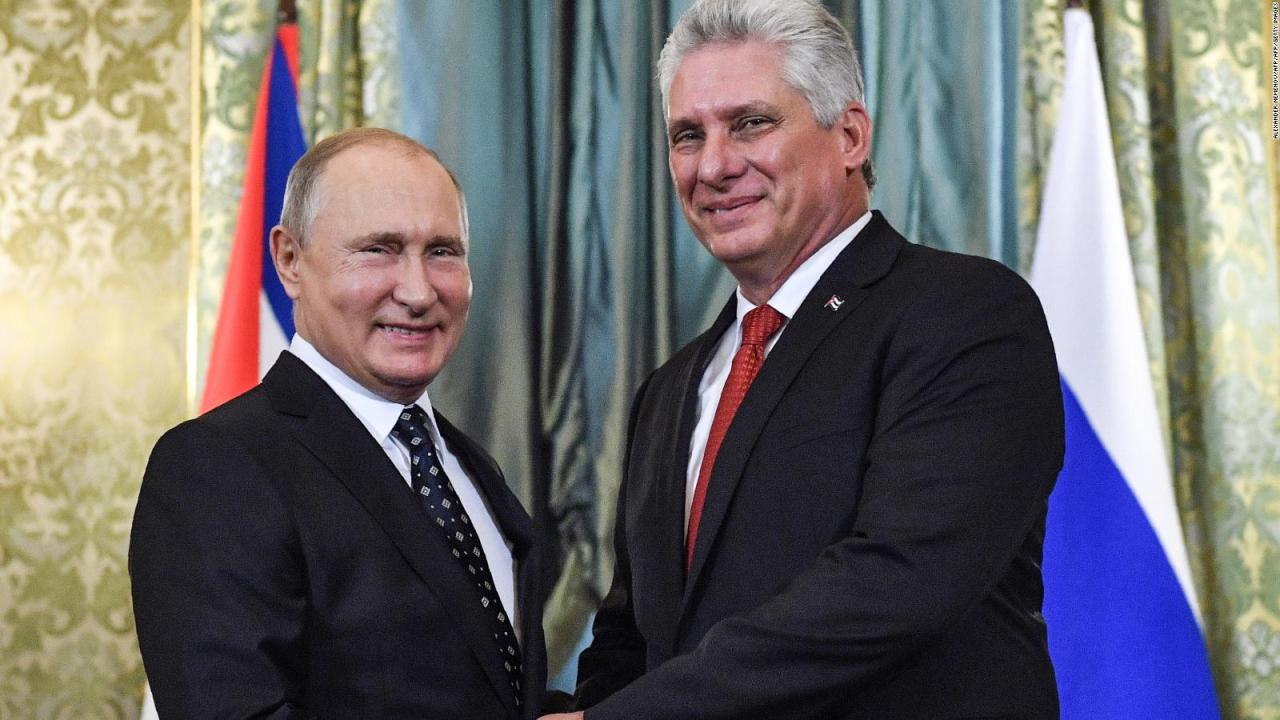 while trying to rebuild bridges with the Biden administration, Miguel Díaz-Canel returns from a desperate tour In which he sought funding to replace the National Energy MatrixA problem that practically paralyzes the country.

The tour included four countries with which Cuba has maintained close political and commercial ties over the years: Algeria, Turkey, Russia, and China., However, some of these trading relationships have been affected by Non-compliance with the payment of foreign and commercial debt by the Cuban regimeThat has led to cuts in credit lines, especially from the strongest economic partners, China and Russia.

Algeria maintains ties with the Cuban regime in the energy sector, as it has been selling oil to it in recent years, particularly on occasions when Venezuela has failed to comply with agreed crude deliveries. In addition, Algiers maintains links with Havana in the health sector, through which more than 800 Cuban doctors and paramedics are working in Algerian hospitals.

Díaz-Canel’s visit will be crucial for the survival of a regime that has not been able to build up its tourism industry – which continues to provide statistics at the time of the pandemic – and which has seen a sharp drop in exports of its main commodities , Which creates a chaotic situation in 2023. ,

Cutting credit lines prevented the Cuban government from buying the supplies it needed from abroad. This has created a food and medicine crisis with most of the population living in extreme conditions. should be added to the above collapse of the energy matrixThat has generated more than 3,000 protests so far this year, and a migrant crisis for an America that is already home to more than a quarter of a million people in 2022. That’s why this begging tour was life or death for the reign of Diaz’s continuity- Canal.

What does Díaz-Canel have in its portfolio to offer its partners?

Raul Castro knows he is no longer in a position to ask if he has given nothing in return. Partners are tired of their repeated defaults, which explains the anemic investment in Cuba over the past decade, and the preference of historical partners to invest in latitudes with more attractive opportunities that yield higher dividends. generate and are high risk. Much less than in the Cuban market.

The question is: If the government doesn’t solve the energy matrix problem in the next 12 to 24 months, this could be the end of it, which puts him in an extremely disadvantageous position to negotiate new lines of credit that would allow him to stabilize the situation and get out of the crisis. What is the need of the government in such a situation? What can Díaz-Canel offer his political allies?

here it is Seven fundamental problems that governance must solve,

1. Rebuild Energy Matrix, With a cost of between $3,000 and $6,000 million, and some work that could take between three and five years, no foreign power will offer these credits, therefore, the energy crisis continues without a solution in the short and medium term. Will remain

2. eliminate food shortages, Under normal circumstances, Cuba imports about $2 billion a year in food. The government is currently unable to generate that income, so the food shortage will continue to grow.

4. boost tourism industry, It is necessary to go back in time when there were more than four million tourists a year. Recovery has failed, a year after the COVID-19 crisis, the figures remain practically the same as at the time of the pandemic.

5. Recover industries including sugar to increase exports, This is an impossible task, as the sugar industry is literally dead, and the rest is ravaged by technological backwardness, obsolescence, and low and unprofitable production.

6. Realization of income from export of medical servicesWhich have fallen more than 70%. The UN condemnation of human trafficking that Cuban medical missions cover up is a hard blow. This situation of defamation will not be reversed. The Lula government in Brazil has already closed the door on a new accord for Cuban doctors.

7. stop public discontent, which has led to more than 3,000 protests and more than a million Cubans immigrating to the US so far in 2022. After breaking the spell of 63 years of dictatorship, the fear of the Cuban people is over and protests will continue, as well as complaints through social networks. They are here to stay, it is an irreversible process which will not be stopped by any policy of terror.

To resolve these emergencies, governance is bound to give to receive, something that is not its normal practice. It is an unprecedented exercise in survival, something that has never been in Havana’s business portfolio, not even after the 2014 thaw with the Obama administration. The Cuban regime has always preferred gestures and political will to defer and even forgive loans and obtain new lines of credit. But it’s a plan that no longer works. for political allies, what prevails now is cash, A strong and clear message that went straight to Díaz-Canel and his mediocre government team.

In what sense, The only resource available to the Cuban regime to get out of the crisis is the sale of the country.And who decides what is sold, how it is sold and under what conditions is GAESA, not Díaz-Canel.

In its portfolio of potential sales, GAESA has control of most of the Cuban hotels with the highest profits, its company ETECSA, with about 95% of the retail business, with ZEDM and with the port project of Havana, just to do. Mention some of the most important assets they can offer to their political partners in search of capital.

Even then, Selling a part of the country is not a solution which solves the problem. Potential buyers want something else. They require legal guarantees to safeguard their potential investments in such companies and projects. They need a market environment (law) that is conducive to free trade and generates a dynamic that creates money and capital flows.

To achieve this, it is necessary to free up at least the productive forces and make structural changes in the economic model. Something that doesn’t seem to be in the options for GAESA and those controlling the country’s destinations at the moment. Instead, ideological penetration and suppression have been preferred.

During the tour of Algeria, Russia, China and Turkey, the biggest relief Diaz-Canel achieved was the moratorium on the payment of the loan. However, no new lines of credit were being opened, so the wallet remains empty. The Gordian knot is tightening the government’s throat.

Algeria has shown no interest in hiring more doctors, a business the rest of the partners are not interested in either. With Turkey, the multi-year contract with Istanbul-based Karadeniz Holding imposes a fee for rent payments on power-generating plants that Havana will hardly be able to meet. In fact, the lack of rental payments for these floating plants forced the Cuban regime to recently hand over the largest shipyard in Cuba to a Turkish company for 25 years.

There are currently seven Turkish plants serving the island. They are anchored in the ports of Havana and Mariel. These plants have a total generating capacity of 500 MW, representing between 18 and 20% of the energy produced in the country. If the regime cannot pay the money to service these plants, what will it hand over to the Turks next? They can be hotels and participation in ETECSA. Right now, these are the businesses that generate the most income in the Cuban economy.

On the other hand, despite the fact that Díaz-Canel’s trip to Russia meant postponing loan payments, it would have dealt a strong blow to the secretive thaw currently underway with the Biden administration. The support shown by Diaz-Canal to Vladimir Putin has been disastrous, Russia’s support of the invasion of Ukraine reinforces the thesis that Cuba is a country that supports those who practice and sponsor terrorism. The European Union has backed a non-binding resolution declaring Russia a “terrorist regime” for its aggression. Furthermore, Brussels called on all democracies in the world to adopt the same measure “with all the negative consequences that this implies.”

China, for its part, gave Diaz-Canal some pieces but did not give credit, reminding him that if he did not pay, there was no business.

The Chinese pieces included the signing of memorandums and agreements including an emergency cash donation, the supply of medicines, medical supplies and food, raw materials for school uniforms, work clothes and kitchen utensils for events. Cuban population. Among the agreements, he highlighted one that seeks to strengthen cyber surveillance. Obviously, this is the most important thing. The Cuban regime has lost control over information, which is why it needs technology to monitor and police civil society, control the web, and establish control mechanisms over social networks.

Diaz-Canel tour fails, None of the partners has loosened their pockets to extend new lines of credit. The only thing the Cuban President has achieved is that they waive the interest on the existing loan and the payment of the principal is postponed for a few years. Therefore, the conditions and factors that have given rise to the present crisis that the country is passing through, will remain active and may worsen in the months to come.

Thus, the promise to end the blackout in December has been broken. Cubans would live Christmas in darkness, with severe shortages of food and medicine. Relief will continue to pour in from expatriates traveling to the island laden with suitcases and dollars to meet the basic needs of their relatives.

The Biden administration should reconsider a policy toward Cuba that has led to a covert thaw, and take into account the reality of the current scenario, which does not fit the Havana regime’s oxygen. It would be good to recall the words of Díaz-Canel during his visit to Russia, when he told his compatriot Vladimir Putin that “Cuba and Russia have a common enemy: the Yankee Empire.” Note should also be taken of the recent decision of the United States Department of Justice, which recommended that the Federal Communications Commission (FCC) deny a permit for the installation of the first submarine telecommunications cable that would connect the United States to Cuba , because the government said Cuba represented a “counterinsurgency threat”. In addition, recent statements by the President of the Cuban government should be noted, blaming the US for Russia’s war against Ukraine and praising Putin for the annexation of Ukrainian territories.

Given this reality, it would be counterproductive as well as a contradiction for the Biden administration to remove the Cuban regime from the list of countries that support and abet terrorism.

Novak Djokovic was given a vaccine exemption after testing positive for Covid-19 in December, court documents show