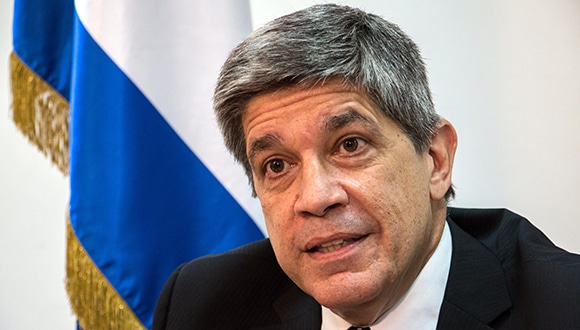 Cossio said Cuba reiterated its concern about measures to encourage illegal emigration, including privileged treatment of Cubans arriving at the US border, and the validity and application of the Cuban Adjustment Act. Photo: cubminrex/Twitter

Carlos Fernandez de Cosio, Cuba’s Deputy Minister of Foreign Affairs, informed the press today about the round of immigration talks with the United States that took place in Havana today. The Cuban delegation welcomed the announcement of the full restoration of immigrant visa services at the Embassy of the United States of America in Cuba, effective January 4, 2023.

At the same time, he reiterated the importance of fully re-establishing immigration and consular services at the US Embassy in Havana, particularly the processing of nonimmigrant visas.

Cuba also insisted Cossio said it is important to adhere to bilateral migration agreements not selectively but holistically.

They noted that the parties reviewed compliance with bilateral migration agreements aimed at mutual commitment to guarantee regular, safe and orderly migration, and that Cuba reaffirmed its willingness to adhere to established commitments, as it has done so far.

In addition, the Cuban side reiterated its concern about the measures to encourage illegal immigration that the US government continues to implement.

representatives of #cuba and the United States held bilateral migration talks in Havana this Tuesday.

According to a note from the Cuban Ministry of Foreign Affairs published this afternoon, the stimulus places particular emphasis on the negative impact that the economic blockade of the United States and the excessive reinforcement measures implemented since 2019 have had on the socioeconomic conditions of the Cuban population. factor. Which constitutes an important incentive for migration.

The preferential treatment received by Cubans who entered US territory illegally and the validity of the Cuban Adjustment Act also constitute incentives.

The Foreign Ministry said that the Cuban delegation insisted that Irregular migration linked to regrettable loss of lifeas well as other incidents such as smuggling of migrants, immigration fraud and human trafficking.

They also drew attention to the danger posed by the activities of criminal organizations dedicated to human trafficking.

During his conference, the Deputy Minister of Foreign Affairs said that This is the second time that delegations from both the countries met to address the issues of migration in 2022 AND WHEREAS the purpose of these negotiations is to evaluate and promote the implementation of bilateral agreements that exist for this purpose Preventing illegal, unsafe and disorderly migration.

Both sides have verified the validity and significance of existing agreements, while we have reaffirmed our commitment to them. “We also acknowledge the steps taken in recent months to ensure the effective implementation of the agreements.”

,@CarlosFdeCossio , US announces full resumption of immigrant visa services at its embassy #cuba from 01/04/2023.

Cossio said Cuba reiterated its concern about measures to encourage illegal immigration, including privileged treatment of Cubans arriving at the US border, and the validity and application of the Cuban Adjustment Act.

He said that the Cuban side emphasized the impact of the economic blockade and its reinforcement measures in recent years. “There is no doubt that a policy aimed at lowering the standard of living of the Cuban population constitutes a direct incentive for emigration.”

The Cuban delegation also noted the need to combat criminal practices that put people’s lives at risk. “We emphasize the dangers of irregular emigration by sea and its serious risks in operations that sometimes involve children and the elderly.”

Kosio reiterated that “it is important to resume the exercise of discussing, jointly analyzing and evaluating the progress of migration agreements,” which are “commitments assumed by both sides.”

They said that “On this occasion, it was possible to have a more thorough assessment of the steps taken since Aprilsuch as the resumption of immigration services in Havana, that a commitment to grant 20,000 annual visas had been met by the United States—both had not been met in April—that it was announced that as of next January 4, immigration would stop in Havana. Services will be fully restored and operations in Guyana will be ceased, with the repatriation process for migrants deemed inadmissible being assessed.”

He recalled that “Cuba informed the US government some time ago of its desire to receive flights for deportation, and that agreement has yet to be reached on the terms and conditions for carrying out these flights, which are agreed upon by both sides.” aspire to regularity.”

The deputy foreign minister said that “although the blockade and reinforcement measures such as the inclusion of Cuba in the list of countries sponsoring terrorism are not part of the official agenda of these expatriate talks, both are issues that constitute an incentive for emigration”. Do and don’t you can ignore this fact.

Migration is a universal phenomenon and the reasons are diverse, factors such as war, natural phenomena, economic crisis, hatred of the reality of the country where one lives, and even overpopulation… They can be found in all regions, including the US. are common issues for Latin America and the Caribbean, Cossio remarked, adding “What is peculiar to Cuba is the exogenous factor, which is the US blockade, the stated purpose of which is to lower the standard of living of the Cuban population.”

He stated that the blockade aimed to make every Cuban’s life as miserable as possible, so it became a factor that could not be ignored when considering the reasons for emigration from Cuba to the US.

The list of countries sponsoring terrorism is one of the measures that amplifies the effect of the blockade, and it is not just the slander against Cuba, a completely unfair designation of Cuba, but the country’s presence in that list- The US government as envisioned – entails punitive actions, he argued.

“It is a high cost that the State Department pays for the arbitrary and one-sided designation,” he said, “and therefore, it can be considered one of the factors that influence Cuban migrant flows to the United States.” .

The two sides did not agree on a date for the third round of talks, but agreed on the need to maintain these dialogues, Kosio pointed out, adding that it was a productive and constructive meeting.

Regarding the contacts that have taken place in recent months between organizations from different sectors of the two countries, the Deputy Minister of Foreign Affairs said that “Cuba and the United States have diplomatic relations and formal channels of communication, as well as the ability to speak on a variety of topics.”

He noted that last week there were meetings between the Border Guard Forces, the State Department and Cuba’s Ministry of Foreign Affairs, the Department of Internal Security and MINREX, and “so Other meetings are not ruled out in the future, not necessarily related to diaspora relationsWhich does not depend on diaspora ties, but on common interest and a clear need for two countries that are geographically close, and have many issues in common, for cooperation and dialogue.

Representatives of Cuba and the United States participated in bilateral migration talks this Tuesday in the Cuban capital.

Minrex and the US State Department hold talks on consular issues

49ers-Rams halftime report: Gold’s kick puts SF on top of the half