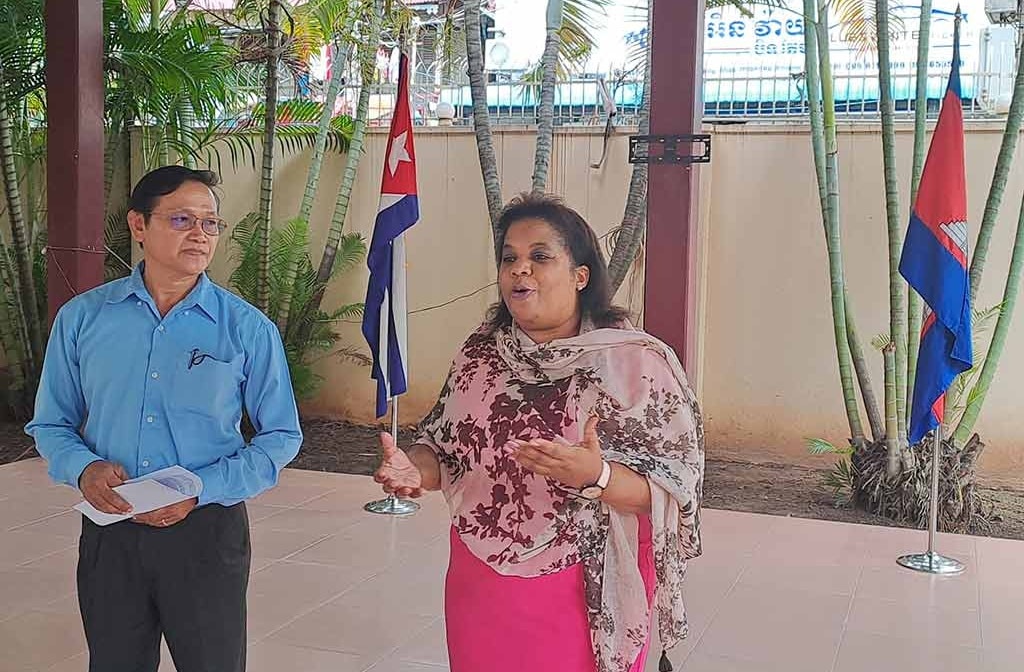 Phnom Penh, Oct 28 (RHC) Cuba’s ambassador to Cambodia, Liurka Rodriguez, here today highlighted the loyalty of the Indochinese nation, which has always been with the island in its fight against the United States’ intense economic blockade.

Cuba is grateful for its unconditional support and at all levels of the Kingdom of Cambodia, which has always been with us not only with the vote in favor of Cuba’s proposal that calls for an end to that policy, but in its interpretation of its position. and condemn this injustice, he asserted.

After meeting with local journalists to inform them of a resolution on the issue that the island would present to the UN General Assembly next November, he told Prensa Latina that the situation was a reflection of the historical friendship that unites the two countries. .

The intense bilateral activity of recent weeks is nothing more than the fruit of a seed cultivated by the historical leader of the Cuban Revolution, Fidel Castro and King Father Norodom Sihanouk, who cemented a close friendship and identified with the common cause of peace and progress. . , They said.

The diplomat recently reviewed the outcome of recent visits to Phnom Penh by Prime Minister Hun Sen and his counterpart Manuel Marrero, a visit to the capital by Cuba’s First Deputy Foreign Minister Gerardo Pealvar.

Later on, the under-21 men’s volleyball team traveled to Cambodia to host two preparatory matches and a friendly match against the Cambodian team, and finally we met Luis Enrique González, president of the Latin American Information Agency, he said.

He stressed that the latter signed an important cooperation agreement with the Kampuchea Press Agency, which would also strengthen bilateral ties in the field of information and join forces in defending the truth.

In her presentation to reporters, the Cuban ambassador remarked that, despite some positive announcements in the right direction by US officials, but extremely limited and practically inappropriate, the blockade did not change its scope or depth at all.

Between August 2021 and February 2022 alone, economic, financial and commercial losses due to the siege reached a record figure of $3,806 million, compared to $6,364 million to be exact in the first 14 months of the Joe Biden government.

Over 6 decades, at current prices, the accumulated losses totaled $154,217 million, he asked them before imagining how much more the Cuban people could have done with those resources.

He insisted that the United States blockade against Cuba assumed an offensive quality that it did not have in the past, for which it has a greater dimension of impact and is more distorted and harmful from a human point of view. ,