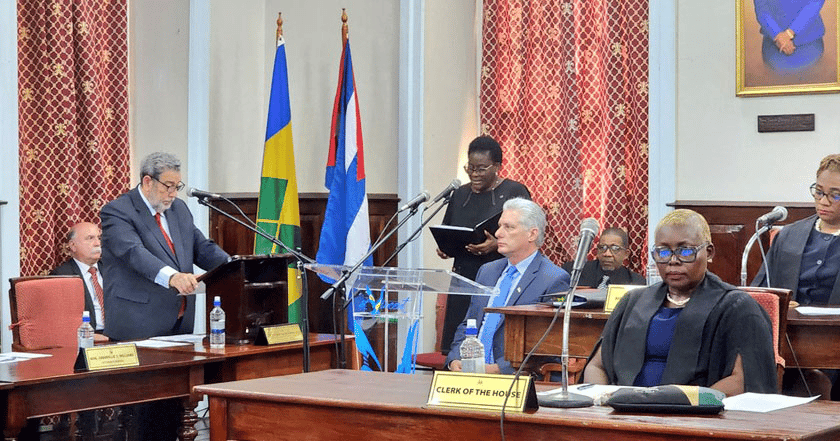 Havana, December 5.- The historic ties of friendship between the peoples of Cuba and Saint Vincent and the Grenadines were reaffirmed today at a special session of the Vincentian Parliament in honor of Miguel Díaz-Canel, first secretary of the Communist Central Committee. Party of Cuba and President of the Republic.

As reported by the Ministry of Foreign Affairs on Twitter, Diaz-Canel thanked the people and government of this sister nation for the expression of solidarity and the resources shared with her country in difficult times.

At the meeting, the Vincentian Prime Minister, Ralph Gonsalves, unequivocally rejected and condemned the United States’ continued attempt to interfere in the internal affairs of the Greater Antilles.

The dignitary condemned the economic, commercial and financial blockade imposed by the US governments and the inclusion of Cuba in the list of countries sponsoring terrorism.

Gonsalves said Cuba and St. Vincent and the Grenadines continue to work together to advance regional integration and protect the United Nations Charter.

He noted that the two countries work together in organizations such as the Non-Aligned Movement, the Latin American and Caribbean Group and the Group of 77.

The Cuban President and his accompanying high-level delegation began their official visit to Saint Vincent and the Grenadines on 3 December, the first stop on a tour of the Caribbean that includes Barbados and Grenada. (Text and photo: ACN)