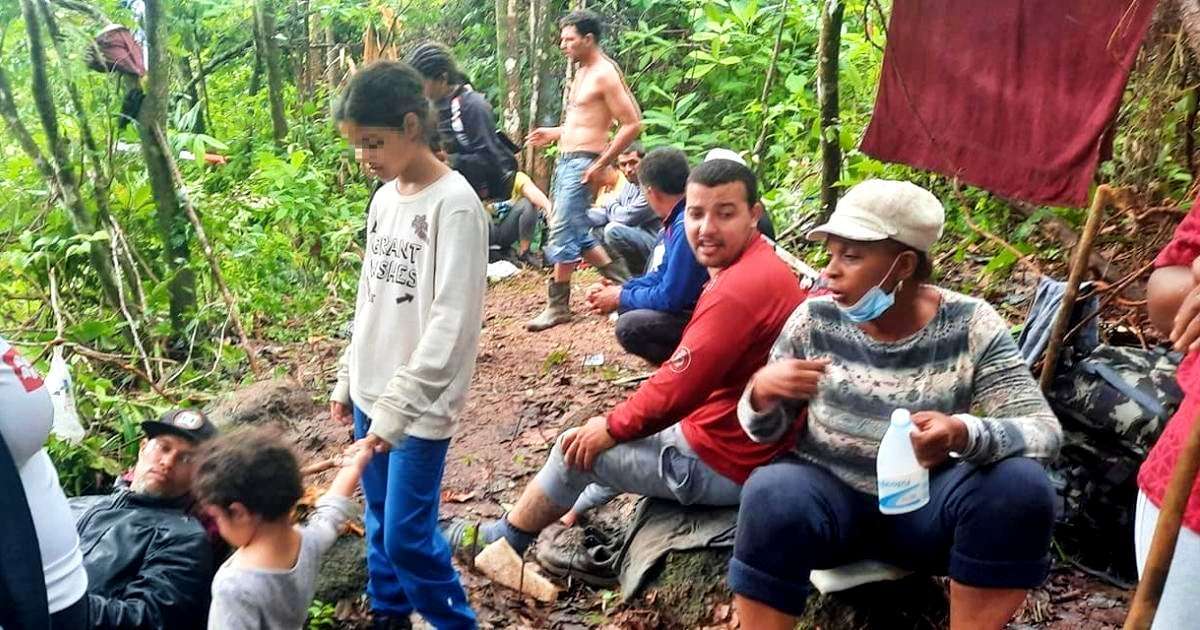 Cuban migrants living in the Darien jungle denounced the abuses meted out to them and citizens of other countries by Panamanian authorities who attempt to reach the United States.

an independent media report cuban newspaper Collected the testimony of a doctor who fled from the medical mission in Venezuela. On 1 December, he and five other Cubans were part of a group of 80 migrants who crossed the border from Colombia to Panama.

“After crossing the border, already on the Panamanian side, we ran into Panamanian guards. They stopped us, forced us to lie down on the ground,” he explained.

According to the story, they had previously met some indigenous people who were on their way to investigate a kiosk burned by Panama’s National Border Service in November, under the pretext that it was used as a shelter by migrants.

“The indigenous people were scared, one of them had a knife in his hand and a guard shot him, he didn’t care that there was a child next to him,” said Cuban, who specified that the indigenous man was not going to Was to attack the guards. He insisted, “No one sees so much impudence as to face eight men armed with rifles.”

The expatriate thanked the indigenous population for the good treatment they received.

He insisted, “In their community we were better off than in Cuba, we had electricity 21 hours a day, constant water and even the internet.”

In the end, 80 migrants were forced to return to Colombia, just as they were in late November.

Cubans expressed fear of returning to their country, as they could be jailed or disabled from work after leaving the official medical mission.

In Venezuela, the doctor explained, they only gave them about 700 bolivars (about $70) a month, which is not enough for them at all.

Another migrant, who is a nurse by profession, lamented that apart from labor exploitation, they are also suffering from a huge moral struggle. “They forced us to give expired vaccines, old medicines, and when we complained, they threatened to go to Cuba,” she said.

In recent years there have been reports of abuses against Cuban migrants en route by land to the southern border of the United States, both by human traffickers and by officials of the countries they pass through.

In October a Panamanian court sentenced Two men get 22 years in jail for raping a woman and stealing Four other Cuban immigrants as they walk through the Darien jungle.

On January 12, 2021, the defendants, identified as brothers Riquelme and Rodolfo Flaco, were charged with “felony counts of robbery and aggravated rape, for causing harm to five Cuban expatriates”.

The court sentenced the brothers, who violently attacked Cuban emigrants, intimidated them, took away their belongings, and sexually assaulted one of the emigrants.

In September, the government of Panama tightens security in border area of ​​Darien jungleAfter confirming the entry of 134,178 migrants into that Central American country during the year.

Between January and July, there was a 43% increase in the movement of migrants from that region.

loss Cubans were the third nationality with the highest presence. (3,133 people), followed by Venezuelans and Haitians.

Andalusia and Fenin bet on technology to improve health

Here’s a quick rundown of what you need to know about the Rittenhouse case.