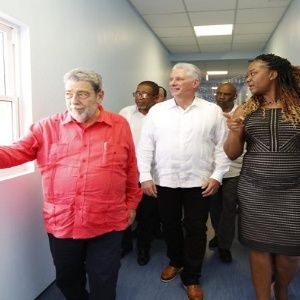 Cuban President Miguel Diaz-Canel Bermudez continued on the agenda this Sunday as part of his official visit to Saint Vincent and the Grenadines, when he inaugurated the modern Medical and Diagnostic Center in the capital city of Georgetown, accompanied by Vincentian Prime Minister, Ralph Gonsalves. visited.

“A dream come true of the Commander in Chief is the Diagnostic and Medical Center that we saw in Georgetown. In this modern health institution, the result of cooperation and friendship, Cuban health partners work closely with San Vicentino colleagues ,” the Cuban president wrote on his Twitter account.

Likewise, the gathered leaders agreed that the center is one of the most important on the Caribbean island, due to its equipment and the quality of the professionals who work there.

A Commander in Chief’s dream come true Diagnostic and Medical Center which we saw in George Town.

Likewise, these doctors share work with other doctors from San Vicentino, many of whom are Cuban graduates.

During his stay in this place, President Díaz-Canel Bermúdez met several members of the Cuban doctors’ delegation and took the opportunity to congratulate them on the Latin American Medical Day (December 3).

near brother @ComradeRalph We took a tour of the beautiful facility. The affection and recognition we have for our associates is palpable.


Díaz-Canel learned of the work of Cuban health workers during the April 2021 eruption of the La Soufrière volcano.

These personnel immediately joined emergency services and provided care and attention to the affected children, among other services, including a group of minors without child protection.

There are 77 health workers and four construction workers in Saint Vincent and the Grenadines. From 1992 (the year of the establishment of bilateral relations between the two countries) to date, 308 St. Vincentian students have graduated from Cuban training centers.