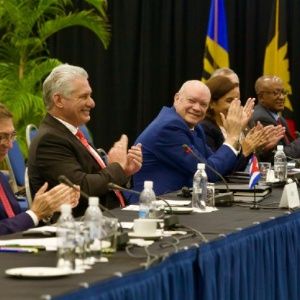 The President of Cuba, Miguel Diaz-Canel, concluded his official visit to Barbados on Wednesday as part of a tour of the Caribbean region, highlighting the excellent state of bilateral relations.

“Our visit to Sister Nation Barbados ended after emotional moments. We reaffirm the good state of bilateral relations, the high level of political dialogue and cooperation and the desire to deepen economic-commercial ties, the President said on his Twitter account.

The Cuban head of state attended the Eighth CARICOM-Cuba summit on the 50th anniversary of the establishment of the Antilles’ largest diplomatic ties with Barbados, Jamaica, Trinidad and Tobago as well as Guyana.

Our visit to the Sister Nation of Barbados ended after emotional moments. We reaffirm the good state of bilateral relations, the high level of political dialogue and cooperation, and the desire to deepen economic-commercial ties.#somoscaribe pic.twitter.com/ZVnFm9ZAB0


Based on this, a commemoration for 50 years of CARICOM-Cuba relations took place on this day at the University of the West Indies, where Diaz-Canel expressed that “every meeting, every minute, in Barbados is of deep importance, they carry our feelings.” Huh. “.

In this sense, the President thanked friends and academics for organizing the Colloquium, meanwhile, he emphasized that Cuba’s relations with the Caribbean “are built on a foundation of friendship, respect and mutually beneficial cooperation. “

The president held a meeting with Barbados Prime Minister Mia Amor Motley on Tuesday, which he insisted was a “warm, cordial and at the same time fruitful” official conversation.

I thank Caribbean friends and academics for organizing this morning a symposium dedicated to half a century of fruitful and fraternal relations #caricom,#cubaBuilt on the foundation of friendship, respect and mutually beneficial cooperation.#somoscaribe pic.twitter.com/Bjx3fM228O


Earlier, Diaz-Canel met with the Barbadian President, Sandra Mason, to whom she affirmed her satisfaction with the good state of relations and her desire to strengthen political dialogue and closer cooperation.

The first secretary of the Central Committee of the Communist Party of Cuba (PCC) arrived in Saint Vincent and the Grenadines last Saturday, starting a tour that also includes Barbados and Grenada.