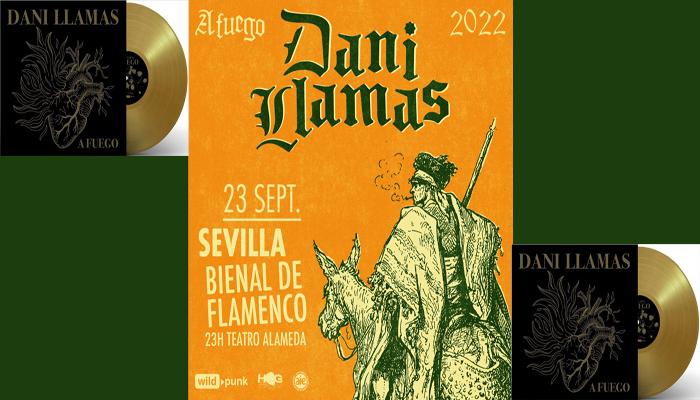 20 different dates await the presentation of “A Fuego”, the essential task Dani Lamas gave us a few months ago. Positioned as one of the Albums of the Year nearly since its release, “A Fuego” is now facing a veritable avalanche of appointments this fall, allowing us to personally enjoy its magnetic and powerful live show. will allow.

The dates that begin this Friday, September 23, are more than a special occasion that will see them take on the stage of the legendary Almeida Theater in Seville within the framework of the Biennale de Flamenco.

And just a few days later, our hero would pack his bags and cross the ocean to Canada to offer the many concerts, with stops in important places like Toronto, Quebec or Montreal. Back in our country, Dani will return on the road to continue a tour that will pass through many other cities such as Leon, Málaga, Tenerife, Madrid, Bilbao, Donosti, Barcelona or Valencia. Don’t miss your chance to enjoy the talent of this guy from Jerez, who turns every concert into an immersive experience. Turn off the smoke detectors because here we go “on fire”.

Listen to A Fuego on any platform you want here: https://orcd.co/danillamasafuego

It’s been a very busy summer for Dani Lamas, one of the most experienced musicians on the national scene, who hasn’t stopped receiving accolades in each of his performances, following the release of his latest work. Because “a fuego” is a rare bird with exquisite fur, in whose DNA the Jerez native like few others has managed to hybridize its Andalusian origin with the American style. Solace, bulería, sevillana or segueria are varnished with solid pigments of Native American music. An authentic sonic delicacy that reaches its greatest heights, if possible, when enjoyed live.

That’s why we’re already counting down the hours for those first appointments that await this fall. And it’s not just one. We’re talking about more than just a special concert lined up at the Seville Flamenco Biennial event, and which will see the Jerez-born artist take the stage at the Alameda Theater tomorrow, Friday, September 23. You can still get one of the latest tickets via the following link.

And from Seville to Heaven. Because throughout the month of October Dani Lamas will cross the pond to offer various dates in Canada, with stops in cities like Toronto, Ottawa, Quebec or Montreal. Back in our country, there will be the Alberta Theater in León, the Nocturama festival in Seville, the auditorium of the city of Cadiz in Rota and the Málaga cycle Suena El Botanico. more wood? No problem: La Laguna, Madrid, their native Jerez, Cáceres, Bilbao, Donosti or the Alhambra Monkey Week festival are just a long list of some of the places that will burn with “A Fuego.” Appointments in which, along with his brand new album, we’ll also enjoy the pearls of his past works.