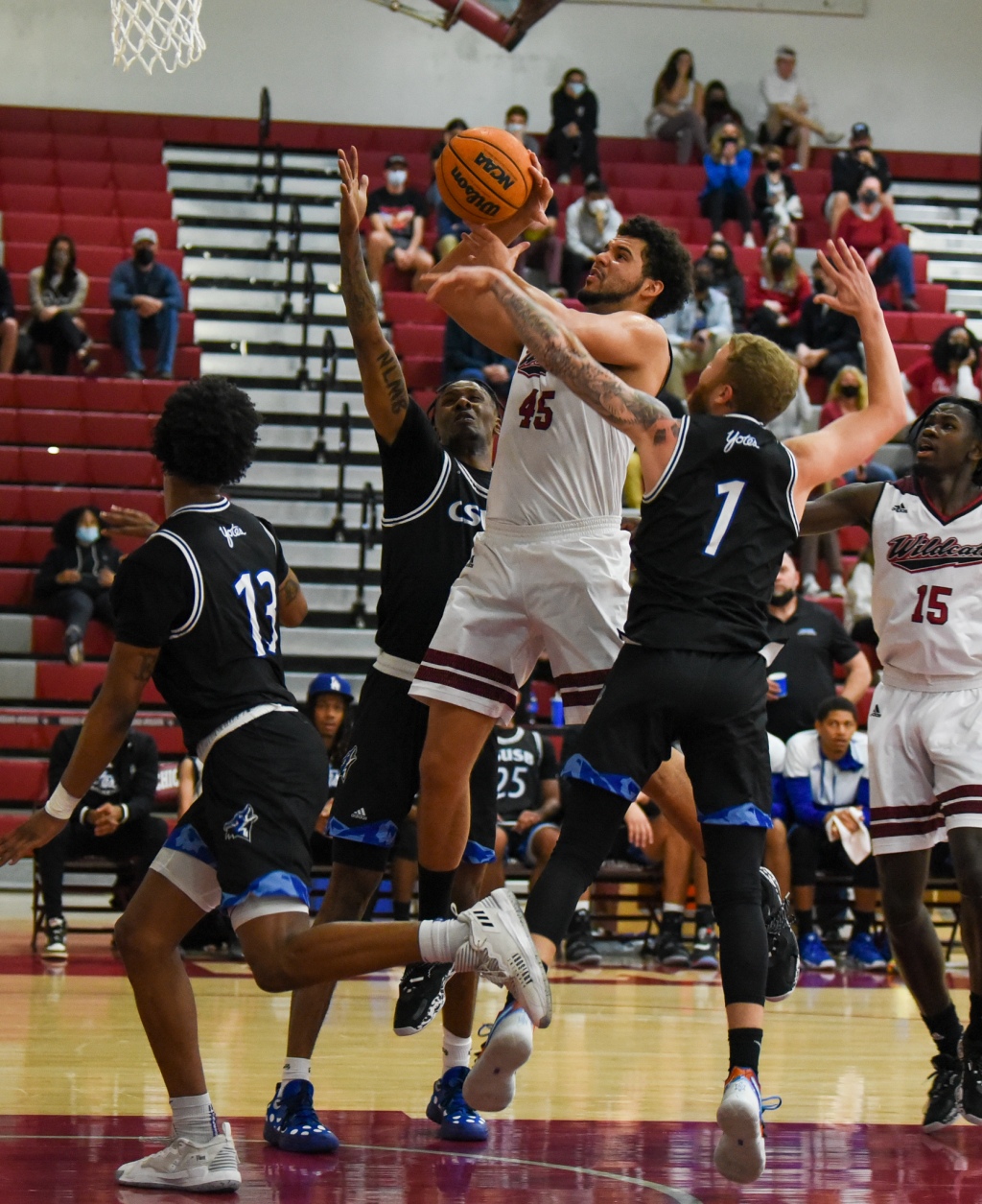 Chico State leaned on its veterans and a strong defensive effort in the Wildcats’ 67-63 win over Cal State San Bernardino on Saturday night in Chico.

San Bernardino’s lone loss of the season prior to Saturday came against Chico State on Dec. 2 when the Wildcats made 19 3-pointers and limited the Wolves to 3-of-16 on 3’s.

Chico State led for the entirety of the game, at one point leading by 18 points one minute and 30 seconds into the start of the second half.

The Wildcats shot 39% on field goals and 36% on 3-pointers, led by senior forward Malik Duffy’s 22 points and seven rebounds. Senior point guard Isaiah Brooks scored 14 points, including a reverse layup in which he was fouled that helped kill a late San Bernardino rally. Brooks remembered a time his sophomore year when he and Duffy both missed late free throws in a game against Humboldt State and nearly lost the game for the Wildcats. Brooks said as he laid on the floor post game in disbelief, former assistant coach Mark Darnall reminded him it was a learning experience.

“When you get to these positions like the one I was just in we’re able to capitalize on it and be like, ‘we’ve been here before, we know how to act in these moments,'” the captain Brooks said.

Chico State was coming off a loss to Cal Poly Pomona in the Wildcats’ return home from a four-game road trip, and after the game Chico coach Greg Clink said his team’s effort on the defensive end was not close to what it needed to be .

The Wildcats limited the Wolves to 22 percent shooting in the first half and 1-of-14 on 3-point shots. In the game San Bernardino shot 31% on field goal attempts and just 17.9 percent on 3-point attempts (5-of-28).

“The competitive level was the biggest thing and our defense,” Clink said about the difference between Thursday and Saturday. “We had a very honest and critical film session Friday after the Pomona game and the thing I love about this team is they respond. They’re coachable and they want to be great and they don’t get defensive when you’re critical of their play and we came out and we made some adjustments.”

Chico State’s defense came out nearly as strong as it could Saturday. In the first eight minutes of the game the Wildcats limited San Bernardino to 1-of-14 on field goal attempts and 0-for-7 on 3-point attempts. Chico’s offense shot 5-of-9 and 3-of-6 in that same timespan.

Brooks said the key to the defense at the start was reminding the starting five players that with an abundance of youth in Chico State’s program it is important for players to set the tone and set an example.

The Wildcats led 16-4 and increased their lead to 15 points with 3:39 left until halftime.

First-year Wildcat Kaleb Carter, who averages just 8 minutes per game, recorded just over six minutes of solid effort for Chico State in the opening half, despite not scoring. Playing against a San Bernardino team with six players at least 6 feet 6 inches in height, the 6 foot 8 inch tall Carter collected four rebounds and had two blocked shots in the opening half.

The Wildcats’ only other player above the 6 foot 6 inch mark Duffy, who like Karter stands at 6 foot 8 inches, recorded 15 points on 6-of-11 shooting and 1-of-2 3-point attempts in the opening half.

Clink complimented Warren’s effort defensively, his shooting as well as “some big time rebounds.” Clink spoke about the way the veterans talk to the team in tense time outs.

“Sometimes I just sit back and let them go before I say anything because the things that they’re talking about is exactly what needs to be said,” Clink said about Warren, Duffy and Brooks. “I’m just really proud of the leadership these three guys gave us.”

With 2:56 remaining San Bernardino’s Darius Mickens made a jump shot to trim Chico State’s lead to four points, but Brooks and Duffy stepped up and proved they are the leaders of Chico State’s team. Duffy made two free throws, and Brooks scored four of his 14 points in the final two minutes.

Mikens drilled another jump shot with 37 seconds left in the game to trim the Chico State lead to two points and Chico State got the ball back needing one made basket to seal the game. Orr drove to the hoop, missed a layup, but was able to coral his own rebound and pass it to Brooks who was fouled.

Brooks made both free throws to give the Wildcats a four point lead and seal the victory.

Orr scored nine points in the opening half on three 3-pointers and finished the game with 12 points.

“San Bernardino’s one of those teams you know you got to bring the energy here or at their place,” Duffy said. “It’s just one of those games coach doesn’t need to get us hyped or ready for. We’re going to get ourselves ready for because we just know it’s going to be a grind the whole game. It was this time and last time and if we see them again we know it will be again.”

Clink told his team after the game if the player can get their mindset the next six games like they had it tonight, great things are going to happen.

“But we have to get us to that competitive level and not overlook anybody,” Clink said. “Not just play, we need to get after it and next Thursday night be as dialed in Thursday as we were tonight. Next Saturday same thing we cannot have any slippage in terms of our mindset and our approach to who we’re playing.”

Chico State (14-3, 10-3 California Collegiate Athletic Association) and Monterey Bay will tip off at 7:30 pm Thursday at Acker Gymnasium in Chico.

Chico State and San Bernardino have now split the season series, with each team winning on their home court.

After outscoring the Wolves 19-2 in the first quarter, the Wildcats led 34-21 at halftime. A 24-11 third quarter secured the game for Chico state

The Wildcats (10-7, 7-5 CCAA) will continue their home stand at 5:30 pm Thursday in Chico against Cal State Monterey Bay.

The military terminates the Pearl Harbor project to identify the dead