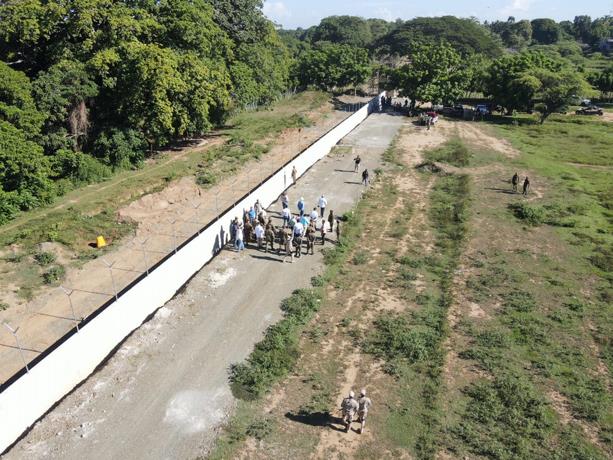 The Minister of Defense, Carlos Luciano Diaz Morfa, assured that there is a discreet perimeter fence being built on the land border with Haiti.a reality” that is in progress and is due for “serious work” Which is executed according to the plan to strengthen the security and control along that border demarcation.

“The process is progressing well. Soon towers will appear, one of which is almost complete; In Pyramid 18, we have About 700 meters and another 1,200 meters between 12 and 13 are ready. It is solid, but we have already started installing steel cyclonic mesh and we have several kilometers. You have to see the roads that lead to both the sides, the naagins, the gates… it is all a process which is going well,” said the Lt.

He told that the work on the entire border is the best from the point of view of security.

“It is a process involving obtaining permits, soil studies, cadastral measurements, surveys, Authority from the Ministry of Environment, Look for mines to get ingredients, that’s all. This is serious work,” he said.

Engineer Luis Casanova, project director of the COFASS company, one of the companies in charge of the work, said for his part, that “We are hitting 100 kmph on all fronts”, When we talk about a perimeter fence, we are not only talking about a fence, we are also talking about 20 cm in reinforced concrete, sections in mesh and sections in tubular steel , and a route that will serve to protect our armed forces from the border.”

Currently, the first phase of the above perimeter fence is being constructed. 1 in this. shall include9 monitoring and control towers10 gateways for patrolling and 54 kms of roads for surveillance and maintenance on both sides.

for the second stage, which are Tenders have already been called for the design of 110 km, comprising nine sections. These include a structure in a reinforced concrete wall, cyclonic mesh and grid in steel profile with concertina in the upper part. It will be surrounded by two (2) land communication routes, watchtowers and gates at specific locations, which will allow patrolling on either side of it.

In addition, and as part of the technical solution, both the phases will have centers with video surveillance cameras, ground radar, motion sensors at specific points, command, control. Communications and Computers (C4) At the formal crossings of Dajabon, Elias Pina, Independencia and Pedernales, all are integrated with the Command, Control, Communications, Computer, Cyber ​​Security and Intelligence Center (C5I) of the Armed Forces, and the acquisition of drones with aerial patrol capability along the border line, With day/night vision cameras.