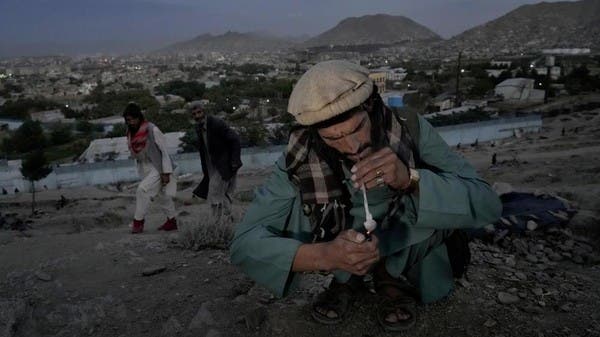 Hundreds of men intoxicated with heroin, opium and meth were scattered on the hill in front of Kabul, some in tents, some in mud. The dogs ran around because they sometimes gave them drugs, and among the garbage were the carcasses of the dogs. Here too men slip across the death line from oblivion and despair, sober and lonely.

“There’s a dead man next to you,” someone told me as I was picking my way between them, taking pictures. “We had buried someone there earlier,” continued another.

A man lay face down in the mud, motionless. I shook him by the shoulder and asked if he was alive. He turned his head slightly, just halfway through the mud, and whispered that it was.

He raised his body slightly. I gave him some water and someone piped him a glass of heroin. He got some energy from smoking. He called his name Dawood. He had lost a leg during the war in a mine about a decade earlier; He couldn’t work after that, and his life fell apart. To escape, he had resorted to drugs.

Drug addiction has long been a problem in Afghanistan, the largest producer of opium and heroin in the world and now a major source of meth. Persistent poverty among the addicts and decades of war have left some families untouched.

It appears to have only gotten worse since the country’s economy collapsed in August last year after the Taliban seized power and the subsequent stagnation of international funding. Families that once got their livelihood were cut off, leaving many people barely able to feed. Lakhs of people have joined the ranks of the poor.

Around Kabul, an increasing number of addicts are found living on open hills, under bridges, in parks and sewage channels.

A 2015 survey by the United Nations estimated that 2.3 million people used drugs that year, which would be about 5 percent of the population at the time. Now, seven years later, the number is not known, but is believed to have only increased, said the head of the Drug Demand Reduction Department, Dr. said Zalmel, who, like many Afghans, uses only one name.

The Taliban, which seized power nearly a year ago, has launched an aggressive campaign to end opium cultivation. At the same time, they inherited the deposed, internationally-backed government’s policy of besieging the drug addicts and forcing them into camps.

Two nights earlier in the summer, Taliban fighters stormed two areas where drug addicts gather – one on a hill and the other under a bridge. In all, they collected around 1,500 people, according to the officials in charge of registering them. They were taken in trucks and cars and taken to Avicenna Medical Hospital for Drug Treatment, a former US military base that was converted into a drug treatment center in 2016.

It is the largest of the many addiction treatment camps around Kabul. There the addicts were shaved and kept in the barracks for 45 days. They do not receive any treatment or medication as they undergo withdrawal. Since the capture of power by the Taliban, the international funding on which the Afghan government relied has been cut, so the camp barely has enough money to feed its prisoners-patients.

But the camps do little to break the addiction.

A week after the raid, I went back to both places, and both were once again filled with hundreds of people.

On the hill I saw a man who was clearly not an addict. In the dark, he wandered among the men, shining a weak torch at each. He was looking for his brother, who got drunk years ago and left the house. He travels from place to place through the Netherworld of Kabul. “I hope one day I can find him,” he said.

The place under the bridge smelled of sewage and garbage. One man, Nazer, in his 30s, seemed respected among his fellow addicts; He broke the feud between them and negotiated the disputes.

Hundreds of Afghan addicts gather under a bridge to smoke drugs, mostly heroin and methamphetamine, in the city of Kabul, Afghanistan, on June 15, 2022. ( Associated Press)

He told me that he spends most of his day here under the bridge but occasionally goes to his house. He said that drug addiction has spread to his entire family.

When I expressed surprise that the lair under the bridge had been filled again, Nazir gave a smile. “It’s normal,” he said. “Every day, they become more and more … it never ends.”

Berkeley apartments with hundreds of units bought by major developer