Diaz-Canel and Malmierca sing Guantanamera at karaoke in St. Vincent and the Grenadines 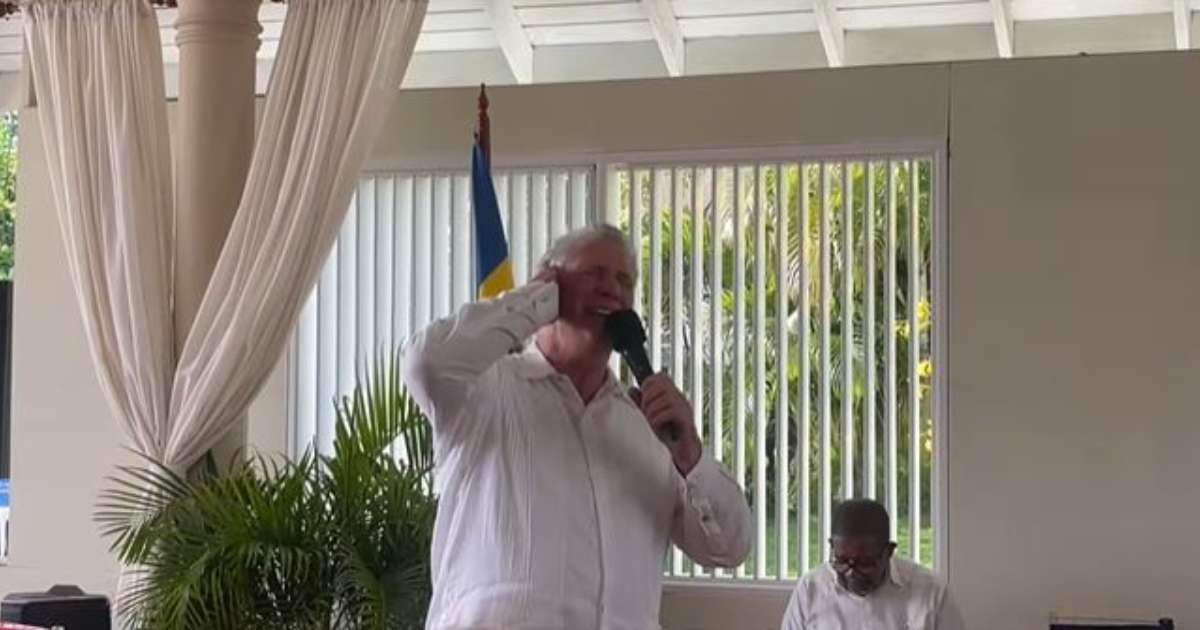 popular cuban songs “Guantanamera”based on the first stanza of simple verse by poet José Martí, attributed to Joseito Fernández and performed by great figures of Cuban music such as Celia Cruz, This Sunday was wasted in the vocal chords of ruler Miguel Díaz-Canel and Minister of Foreign Trade and Foreign Investment, rodrigo malmierca diaz,

in a session of karaoke during your visit Saint Vincent and the Grenadines – as part of a Regional tour of several Caribbean islands — Cuba’s leaders showed their utter inability to reach the high notes of the country’s iconic—and perhaps most famous—song, as revealed by a snippet of the “singing” shared by the API agency . (Public Information Agency) on Facebook.

Malmierca was not afraid to be the first to take the microphone and try, with his characteristic vocals, to sing the chorus of “Guantanamera”.

As if that brief piece were not enough to establish Malmierca as the highest representative of the ridiculous, the minister passed the scepter to Díaz-Canal, who apparently had “breakfast” at the time that his soft palate rang a was not suitable for access. G or C major in verses simple verse,

In other words, Diaz-Canel “lost his cock” And, coincidentally, the most critical moment turned out to be in line with the piece “With the poor of the earth / I want to cast my fate”, when he could not sustain the notes that coincided with the end of the verse.

Pretending to sing the melody, with one hand on his right ear, the ruler continued singing amid the laughter and applause of those present who were delighted with such a performance.

Lis Cuesta, excited by the public Sing songs and clap. The first lady could not sit in her chair due to the emotion generated by seeing the “dictator of your heart” star in that circus.

(Unknown at the time of writing this note if Cuesta asked for a microphone to join in the karaoke).

However, this fact is not the only “big paper” embodied by the ruler on this tour. In his farewell to the officials of St. Vincent and the Grenadines, he faced the daunting challenge of pronounce some sentences in english Who was mocked on social media.

,Saint Vincent and the Grenadines will always be able to count on Cuba, with the solidarity and affection of the Cuban people. As Jose Marti said: ‘Love is repaid with love’The idiosyncratic challenge was that Díaz-Canel more than failed.

some people didn’t notice that in the last sentence instead of loveQuoting Jose Marti when he says Loss hey Lost, noted his poor diction among other criticisms.

Miguel Díaz-Canel and his entourage are currently on a presidential tour of several Caribbean countries, and one of the first destinations was Saint Vincent and the Grenadines, where, among other activities, they visited a medical center where some twenty doctors work. Huh. Cuban nurses and technicians.

after leaving that country he went Barbadoswhere he already met with the Prime Minister of that country, Mia Amor Motley.

Under investigation in the assassination of former Malawi President Albino Man