Djokovic faces deportation due to repeated withdrawal of visa to Australia 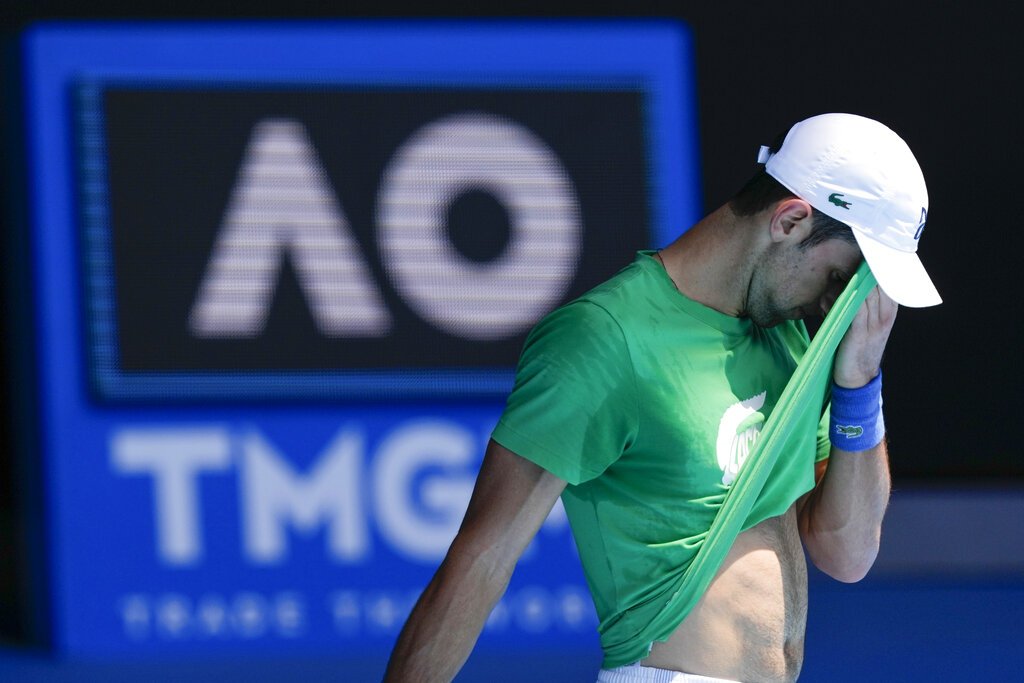 MELBOURNE, Australia (AP) – Novak Djokovic faces deportation again after the Australian government revoked his visa for the second time, the latest twist in the ongoing saga of whether the first-place tennis player will be allowed to compete in the Australian Open. tennis. despite being vaccinated against COVID-19.

Immigration Minister Alex Hawke said Friday that he used his ministerial discretion to revoke the 34-year-old Serb’s visa out of public interest – just three days before playing at the Australian Open, where Djokovic won a record nine of his 20 titles. Grand Slam. …

Djokovic’s lawyers were expected to appeal to the Federal District and Family Court, which they successfully did last week on procedural grounds after his visa was first canceled when he landed at Melbourne Airport.

Deportation from Australia usually results in a three-year ban on return to the country. Thus, Djokovic will be 37 years old the next time he is allowed to participate in the Australian Open.

Hawke said he canceled the visa “for reasons of health and good order, on the grounds that it was in the public interest.” The statement added that the government of Prime Minister Scott Morrison is “firmly committed to protecting Australia’s borders, especially in the wake of the COVID-19 pandemic.”

Morrison and Hawke are part of a conservative government that prides itself on being tough on border controls.

Morrison hailed Djokovic’s impending deportation, saying Australia has achieved one of the lowest death rates from a pandemic, the strongest economy and the highest vaccination rate in the world.

“This pandemic was incredibly difficult for every Australian, but we stuck together and saved lives and livelihoods. … Australians have made many sacrifices during this pandemic and they rightly expect the outcome of those sacrifices to be protected, ”Morrison said in a statement. “This is what the minister is doing by taking these actions today.”

All participants in the Australian Open, including players, their cheerleaders and spectators, must be vaccinated against coronavirus disease. Djokovic was not vaccinated and sought medical exclusion on the grounds that he had COVID-19 in December.

This exemption was approved by the Victorian government and Tennis Australia, which appears to have allowed him to obtain a travel visa. But the Australian Border Service rejected that exception and canceled his visa when he touched down in Melbourne on January 5.

Djokovic spent four nights at a hotel for detained immigrants before a judge overturned the decision on Monday. This decision allowed Djokovic to move freely around Australia, and he trained in Melbourne Park to prepare for a tournament that he has won each of the past three years.

Djokovic has been training every day since he was released from custody, posting on social media a photo of himself with his team at Rod Laver’s arena.

He had a mid-afternoon training scheduled for Friday at the main show court of the tournament, but changed his time to start and finish earlier.

Media began to gather at the entrance to the building, where Djokovic was reported to have met with his lawyers following the announcement of the minister’s decision.

With his legal situation still in limbo, Djokovic entered the tournament bracket during Thursday’s draw to face Miomir Ketsmanovic in a Serbian first-round match.

Melbourne-based immigration attorney Kean Bone said Djokovic’s lawyers have a “huge challenge” getting court orders over the weekend to allow their client to play next week.

Speaking hours before Hawke’s decision was announced, Bone said, “If you give it up later than he did now, I think from a strategic point of view, he will really undercut Djokovic’s legal team in terms of what options are or the remedy he can get. “.

Djokovic’s lawyers will need to go to the judge on duty in the Federal District and Family Courts or a higher judge in the Federal Court to receive two urgent orders. One of the orders will be an injunction against his deportation, such as the one he won in court last week. The second will force Hawke to grant Djokovic a visa to play.

“This second order is almost unprecedented,” Bone said. “It is very rare for the courts to order a member of the executive branch to issue a visa.”

Jacqui Lambi, a powerful independent senator, argued that Djokovic should be dismissed if he broke Australia’s vaccination regulations. But a few hours before the visa cancellation was announced, she complained about how long Hawk took to make a decision.

“Why does it keep dripping from the tap? Alex Hawk, where are you? Missing?” Lambi asked.

“If you can’t make a decision on Novak Djokovic, my God, how do you guys run the country? This is an absolute mess, ”she added.

Jury to weigh some lesser charges in Kyle Rittenhouse case