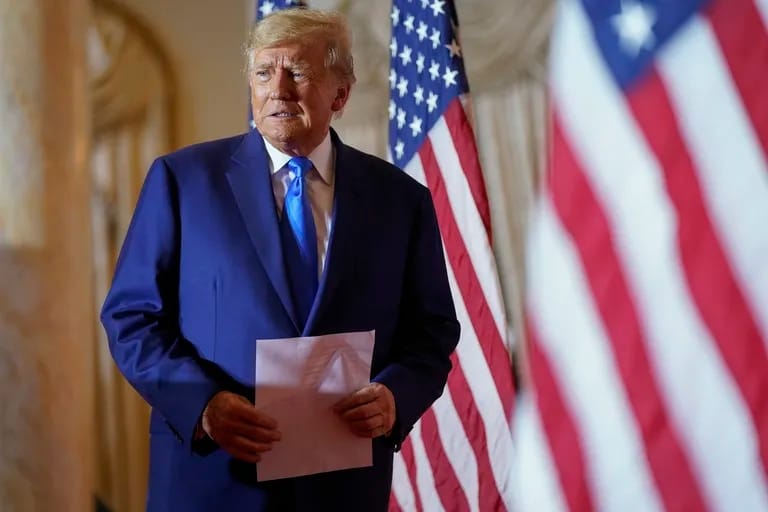 After flirting with the idea of ​​running for weeks, former President Donald Trump Made official his intention to compete as the 2024 presidential candidate for the Republican Party of the United States. He said this at his residence in Mar-a-Lago on Tuesday night., If he wins the nomination, he will face the Democratic Party’s nominee. President Joe Biden said he would seek re-election. Both the tycoon and the 79-year-old politician crossed paths in the 2020 general elections, where Biden won with 51 percent of the vote.

“This is just the beginning of our fight to take America back. to make america great again Tonight I am announcing my candidacy for President of the United States.”, were the words of Trump. as confirmed Guardian why CNN—among other media—prior to his speech, Trump had submitted his nomination to the Federal Election Committee.

His announcement came just days after the candidates he supported were defeated in most cases in the midterm elections. “This should not happen. Two years ago, we were a great nation. In the near future, we will once again become a great nation.”he said from Miami. Taking advantage of this opportunity, he also targeted the Joe Biden government, which he blamed for the decline in the economy.

“These last two years have been really bad. Inflation soared and is the highest in our history. The borders of the South started becoming porous and who knows who entered. We will have to bear the brunt of this kind of interference for years. America has been completely insulted. But there’s no real reason for this decline to continue. We don’t need to continue with this fate.”Trump maintained.

And he said: “We are going to drive the corrupt forces out of our country. We are in a terrible position. We are facing a big problem. Our country is being destroyed before your eyes. And a politician cannot get us out of here. We must create from among us a great movement that embodies the courage, confidence and spirit of the American people. It works for millions of people who are proud to live in the country they live in.”

For the businessman, “It won’t be my campaign, This will be his campaign, all of us, “The only power to be able to counter the corruption rampant on us is the public. I will only be their voice, as I promised from 2016. It is not about politics, it is about our love for this great country”, he said.

He also explained the reasons why he decided to announce his candidacy: “I am running because I believe the world has not yet seen the immense glory that the United States of America can achieve. We haven’t reached the top yet. We can go too far. But in order to go far, we must first get out of this pit in which we are sunk. And once we do that, we will be able to see things that have never been seen before in this country.”

“From now until the election, I will fight like no one has ever fought. We are going to defeat the radical left that threatens to destroy our country from within. We must be protected by all those countries that seek to destroy us, that hate us, that seek to abuse us,” he warned.

And he specified to conclude: “I’m going to make sure Joe Biden doesn’t get another four years. Our country could not tolerate this. I don’t say this in jest, I say it with tears. In 2020, I got the most votes ever for a President. And we’ll do it again but with more votes. This campaign is going to be based on problems, visionaries and successes. We will not stop until we achieve all our goals and become great again,

Storms to potentially slow the start of fire season in parts of the Bay Area. How much rain can we get?