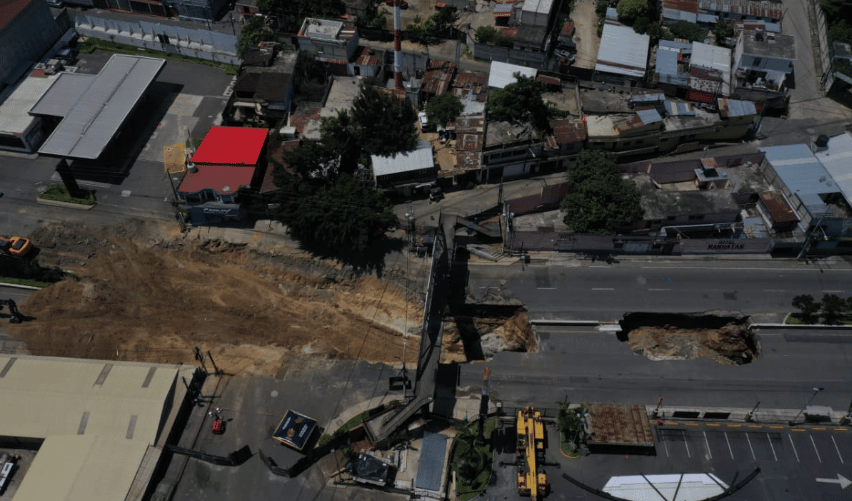 The mayor of Vila Nueva, Javier Gramjo, in an interview with La Red this Tuesday, October 4, indicated that the reconstruction of the Concepción Road in zone 6, It will be divided into two phases; He also talked about the use of technology to find out if there are more caves in the area.

This technique will be used after the sinkhole that was recorded last September 24 when two vehicles fell into the sinkhole and one of them was located The bodies of Olga Emilia Choz Ulin, 38, and her daughter, Helen Michele Mejia Choz, 15.

Gramajo indicated that they would use The LiDAR technique from the 15-kilometer overpass or the grid from the entrance to Villa Nueva where the collector begins to find out if there are more caves.

Verification with this technique It will be expanded into Las Vegas neighborhoods and on land owned by companies in the area.

He said that this process requires patience, because if there is no proper study of the area, they cannot take technical decisions for the works.

He explained that according to earlier analysis and detection with LiDAR and GPR images, which are different techniques, They mark two possible caves on the Conception Road that are not visible and still have a layer of asphalt.

In view of this situation, they have disabled the above road, as they cannot allow another tragedy to occur.

That is the purpose of the study, to find out if there are more caves in the area and to resolve that situation.

“Remember that the municipality has to be very responsible while doing this, I have always said this, from now on the responsibility was not created by this administration, But from now on whatever situation I do will be my and the council’s responsibility. If we don’t have studies we’re not going to do anything,” said Gramjo.

In the interview, Gramazzo said that on Monday, October 3, work began on the sinkhole on Conception Road and that there would be more movement this Tuesday after a technical table at the National Coordinator for Disaster Reduction and in which he made the decision. for the first step.

He explained that the first step is pop-up collector construction, Because they cannot allow water to flow into the sinkhole or the collector at the end of the rainy season.

This collector will be two meters deep and they will connect the grid to channel the water to the collector under the Enrique Tejada Wild Bridge.

He insisted that the collector of the affected area could not be with water and less rain. However, there has been no rain in the sector for five days and hence no landslides have been recorded.

“This is a very complex situation that we have to resolve in the first phase,” said the official, who said the work would be jointly carried out by the Municipality of Vila Nueva and the Guatemalan Army.

They will start with laying the pipe and work to eliminate the pop-up collector can last up to a week and a half, which will only happen to stop the circulation of water in the damaged collector.

The mayor said that for the second phase He expects the Ministry of Communications to conduct a preliminary study in three weeks and then continue the work.

He warned that the area was still unsafe, as there was an emergency across the boulevard and so they should wait for studies.

“We cannot blindly start building the collector,” he said.

ALSO READ: Drowning in Villa Nueva: Emotional moment when rescuers kneel to pray and explain how the search for victims was

He indicated that the central government supported the creation of the Collectorate, because leaving the boulevard, you enter the CA-9 route.

he remembered that the vehicle He fell into a cave 13 to 15 meters deep and the base on which he had broken he fell another 15 meters.

They will remove the path due to movement of earth and machinery.

Gramajo said there was no work in the area last weekend because the Public Ministry was under investigation, as two people were killed there.

He recalled that on Monday, October 3, the National Civil Police (PNC) carried out the process of taking the vehicle where the mother and daughter had found the property.