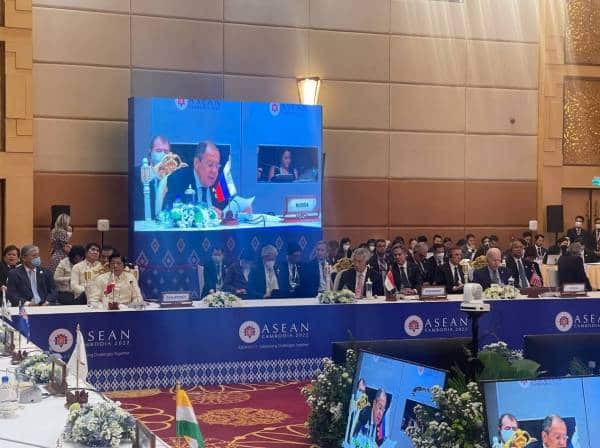 An East Asia summit held parallel to the one held by the Association of Southeast Asian Nations (ASEAN) in Cambodia ended this Sunday without a joint declaration due to disagreements between Russia and the United States over the conflict in Ukraine. ,

Russian Foreign Minister Sergei Lavrov told the press at the end of the working session, “Collective decisions were not made today because the United States and its Western allies spoke about the situation in Ukraine in completely unacceptable language.”

The Foreign Minister clarified that Cambodia, as the host and temporary leader of the Asian Association, will issue a personal statement outlining future guidelines for cooperation.

The East Asia Summit has brought together ASEAN leaders, along with external partners such as the United States, China, Russia, India, Japan, Australia and the European Union, who attended as guests.

Lavrov also referred to United States and NATO interventions in the Asia-Pacific region as “promoting competing formats with inclusive structures under ASEAN.”

The high representative of the government of Vladimir Putin said that this intervention leads to “militarization of the region with the clear aim of containing the interests of China and Russia”.

In this regard, Lavrov noted the West’s efforts to include New Zealand, Canada, Japan and the AUCS coalition (Australia, the United Kingdom and the United States) in the new defensive line.

The US delegation, which was chaired by President Biden, formalized the Comprehensive Strategic Partnership with ASEAN and pledged $825 million in aid.

On the other hand, the Association of Southeast Asian Nations (ASEAN) reaffirmed its readiness to act as a reliable mediator with the partners of the East Asia Summit (EAS, for its abbreviation in English) in Phnom Penh.

This message was given by Prime Minister of Vietnam Phan Minh Chinh while speaking at the event. Minh Chinh said that this mediation will contribute to the joint search for effective and lasting solutions to current security challenges.

ASEAN, established in 1967, is made up of Brunei, Cambodia, Indonesia, Laos, Malaysia, the Philippines, Singapore, Thailand, Vietnam and Burma (Myanmar), although the latter has no representatives at the summit as the military junta has a veto. to be done..

Hospital admissions due to COVID in Los Angeles County dropped below 600, but is a winter surge coming?