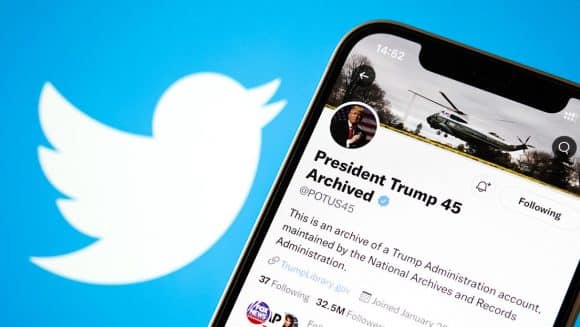 The tycoon claimed that the account of former US President Donald Trump was blocked “under pressure from hundreds of activist employees”, although he himself “admits” that the politician “did not violate the rules”.

Twitter’s new owner, Elon Musk, shared another piece of files on censorship on the platform this Monday, referring to a source by journalist Bari Weiss. In his post, the tycoon said that the former US President’s account Donald Trump was blocked “hundreds of workers under pressure from employees”Although they themselves “recognize” that politicians “didn’t break the rules”,

In a post, Weiss noted that “For years, Twitter resisted both internal and external calls to ban Trump, arguing that a world leader was blocked from the platform or his controversial tweets”. was removed. Hide important information that people should be able to see and discuss,

However, after the attack on the Capitol on January 6, 2021, “pressure mounted to ban Trump, both inside and outside Twitter,” and the platform’s employees “organized to demand” that Twitter CEO, Jack Dorsey, Blocked in the account of the then President.

What were Trump’s tweets that caused the blockade?

On January 8, 2021, Trump tweeted that he would not attend the inauguration ceremony of his country’s elected president., Joe Biden, which was scheduled for January 20. The same day, the politician sent another message to his followers: “The 75 million great American patriots who voted for me to ‘USA. First’ and ‘Make America Great Again’ will have a huge voice in the future. With you.” Will not be disrespected or treated unfairly in any way, position or form!

Following the post, an open letter signed by over 300 Twitter employees came to light demanding “Trump be banned”. “We must examine the complicity of Twitter, which President-elect Biden has called an insurrection,” the journalist recalled.

However, “the Twitter staff assigned to evaluate the tweet quickly concluded that Trump did not violate Twitter’s policies,” Weiss said. Nevertheless, his account was eventually blocked, “despite key staff members saying that Trump did not incite violence, even in an ‘encrypted’ manner.”

How is this possible?

Less than 90 minutes after Twitter employees determined that Trump’s tweets did not violate company policy, Vijaya Gadde, Twitter’s head of legal, policy and trust, asked if it really could. A ‘coded provocation for more violence’”, wrote the journalist.

It was then concluded that the phrase ‘American patriot’ could be interpreted as a reference to “rioters”, and thus Trump “may have violated Twitter’s policy against glorifying violence”. “The members of that team came ‘Seeing him as the leader of a terrorist group responsible for violence and death, comparable to the Christchurch shooter or Hitler, and on that basis and all of his tweets, he should be removed from the platform’Weiss said.

On January 8, 2021, the former White House chief of staff was banned for life from Twitter, where he has more than 88 million followers, after his supporters stormed the Capitol two days earlier. In one tweet that led to his ouster from the social network, Trump described those responsible for the seizure of the legislative compound as “American patriots,” while in another he announced he would not attend the presidential succession ceremony.

After Elon Musk completed the acquisition of Twitter, the businessman decided to restore the former president’s account.

(taken from RT in Spanish)