Escambray – Georgia defines pending seat in the US Senate 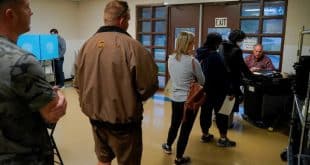 The complex North American political system and the characteristics of its electoral system have led to the fact that nearly a month after the midterm elections, a seat in the North American Senate has yet to be defined.


Ho takes the lead in the runoff vote in the Georgia Senate race with Democratic incumbent Raphael Warnock, who seeks to retain his seat against conservative challenger Herschel Walker.

The need to return to the polls was due to the fact that neither of the two claimants received more than 50 percent of the total ballots cast as required by law on 8 November.

To date, more than 1,860,000 people have cast their early votes for the second part of these elections, according to data from the Election Project site.

The source said the 41 to 65-year-old group led the polling with 48 per cent of the total number of participants, followed by those over 65 with 36 per cent.

Similarly, women constitute the majority, as they so far represent 56 percent of voters who have already distributed their ballots, and by ethnic groups, non-Hispanic whites lead with 55 percent.

According to a CNN poll, Warnock maintains a narrow lead over Walker, with 52 percent of likely voters supporting the incumbent.

The survey showed how conservatives face widespread questions about their integrity and face a negative rating, with almost half of those supporting them saying they would rather support their co-religionists than More motivated than defeating a political opponent.

The poll found that nearly all Democrats (99 percent) support Warnock, and 95 percent of Republicans support Walker, with supporters on both sides deeply engaged.

If the Democrats ultimately win, the blue-eyed would hold 51 seats in the Senate.

Otherwise, the Republican total would be 50, but the liberals would retain dominance, as the tiebreaking vote in that legislative body would fall to the nation’s Vice President Kamala Harris.

In the recent midterm elections, control of the other hemicycle of the federal Congress, the House of Representatives, fell to the Republicans as they gained 222 seats while the Democrats gained 213 of the 435 seats in the fray.

(With information from Prensa Latina)