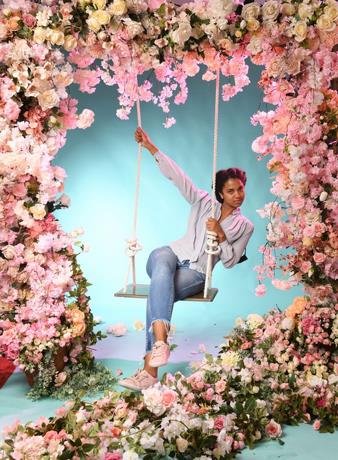 “The benefit that I have always had from saving something is so great, in that they have given me so little for breakfast, that today, when I don’t have so many limitations, I cling to that habit. So much so that I I make a rule that I spend only 10 percent of what I earn per month. No matter what happens, I’m not getting out of there.” Eudelsi D-Raben told it with a laugh as she adjusted her bountiful hair.

He has been through many. But, unlike what some people do, in her bitter memories she has found the strength to “move on.” “My eyes popped up when I saw my classmates eating everything they sold, and I had to prepare to eat whatever I could buy with the five pesos they gave me.” His eyes show nostalgia, but his laughter hides it as much as he can.

It is in the face of such scarcity that the owner of the story of overcoming it decides to “save bread for May and flour for April”. While studying at the Fe y Alegria Center, she pays attention to the complementary classes they teach. He takes advantage of the craft and this is where his first steps in “business” begin. Despite her young age, she decides to work with macramé fabrics. “I remember making a vase of sorts and hanging it in the gallery of my house, someone passed by and liked it. He bought it for me and I said to myself: ‘Oh, but I’ll make bracelets too. I did that, and I took them to school and sold them there.” He shows his honesty and the pride he takes in his undertaking, even when the word did not even dream of being fashionable.

There were days when he could make up to 100 pesos. Lots of money for a poor 12-year-old girl and, as if that wasn’t enough, she had to share her “poverty” with four other siblings. “We have never been hungry, but we had no way of feeding ourselves properly. We were very poor, but this is what taught me to save. I didn’t want to ask my mom or my dad, because I knew they didn’t have to.” Her parents separated when she was very young. He moved to Puerto Plata and moved to Sabana Perdida. His father Aurelio De-Raben died 14 years ago.

Yudelsi took advantage of his vacation to go to his father’s house and each time he gave him some money: “If it was 50 pesos, for example, he spent 20 and saved 30.” He laughs at his act because it has increased his savings. She did it with more confidence, as her mother left the country to try her luck, and things got more difficult. Then she came back and since then, Angelita has been working at the Frias Dario Contreras Hospital.

As time passed and he progressed in school, so did his business. Already in high school I was selling more bracelets and everything I could. “The fact is, when I started studying social communication at the Autonomous University of Santo Domingo, I bought my first computer with my savings. It cost me 17,000 pesos. He has no room for such satisfaction And she shows it by shaking her head as a sign of success.

“I moved my business to USAD and managed to save a decent amount of money. There were days when it would make up to 800 pesos. I had more and more customers because people promoted me. My bracelet is so beautiful Were there and with a good finish and they sold well.”

The girl who told this story of overcoming did not stop here. On her “rib” she enrolled in a famous modeling school because everyone told her she had the impression of a model. “My dad paid me the registration because God helped him, and I was in charge of the monthly payment with my heart cut out.”

it went very well. She came out in commercials to participate in beauty pageants including Miss Dominican Republic 2012. Of course, to pay for all this, she used donations from her relatives and neighbors, who also went to a Kermies to help her. That’s where his savings went. She was among the 10 finalists. “I remember when the first 15 people called, I said to myself: ‘Here I am’, and it was like that. Later when I called at 10, I thought: ‘Kaala wala missing, kaala wala missing’, and they call out to Kale. He laughs out loud and remarks that, although he didn’t win, that participation opened many doors for him, some that allowed him to start his own business today. Is allowed.

“I’m not rich, but I look back and realize I was very poor”

“If I tell all the things I’ve gone through, we don’t end this interview. But every sacrifice has made me stronger. When they tell me no, that’s what I try to achieve.” I was determined to do.” Once he makes his determination clear, Eudelcy De-Raben emphasizes that not wasting money and ignoring the word is not the key with which he manages.

“I can tell you I don’t buy unnecessary things. For example, I bought these clothes to come to the interview. It’s not like I’m buying everything they sell me to put in a closet, I need to go and buy it. Oh, and most of the time I buy in bales.” He laughs until he can help himself explaining what ‘vest’ or overcoat he’s wearing It wasn’t bought on the bale. “It was a pleasure that I gave myself with the 10 percent I earned this month.”

Regarding the second concept with which she manages to leave nothing, Yudelsi says that she has experienced various forms of subsistence and has never given up. “You can’t imagine how long it took me to graduate as a journalist at USAD. It was me who covered my studies, my ticket, everything. My mother took me to the bus stop early so that nothing would happen to me. And I really had a lot of work to do.”

This time her eyes lit up, but she doesn’t let that gleam turn into tears and continues her story. “Every time I started doing a thesis, something happened and I had to leave it. But there came a time when reading what came to me like a glove, I said to myself: ‘Now, I’ll finish it’ So I did, I graduated and worked in the field for a short time, but I didn’t feel like it was my thing.”

He thinks a little and smiles. “Let me tell you that I started working formally at the age of 16 in a business where he painted. I never stop looking for weight and savings, even if it’s a small thing, because it’s the only way to move forward. Giving this information, she emphasizes that she felt that journalism was not her thing. “I didn’t know my passion was in the crafts I did when I was 12.”

One day he saw the possibility of going to the United States to take a course on staging shows. He traced everything from his account and relied on his savings to make the move. “But what happens, when I went looking for a visa, they refused me. The consul asked me with what money I would cover the cats and I told him that from my savings, but I was short of money, and he didn’t give it to me. It didn’t make me lose. I saw that Infotape was going to teach a course and I signed up, but they didn’t call me. A neighbor helped me and I was able to go inside. It is easy to see how proud he is of what he has achieved.

Then she meets with interior designer Miguel Rodriguez and offers to work for him for free so that he can learn. His wish came true and he contributed to a montage he had at a mall. He works in a local flower shop, but in customer service. “I was watching and learning. One day, one of the guys wasn’t there and I did a repair for a client. It wasn’t how I designed it, but I didn’t pass out. I kept learning.” He worked there for three years and continued to provide independent services.

Compounded by the fact that she doesn’t know the word “no”, Yudelsee decides to quit her job at a flower shop and start working independently “with bare hands”.

“Every day they got to know me more and more and famous people needed my services. That’s when I realized that I had to buy a vehicle. Without knowing how to drive, I fixed it and started practicing. I got my license, and slowly I was doing better. It is in that truck that I transport all my flowers and my work tools. He concluded by leaving as advice that, when you have a culture of savings, you don’t compulsively buy or say “no,” it’s easier to achieve success.