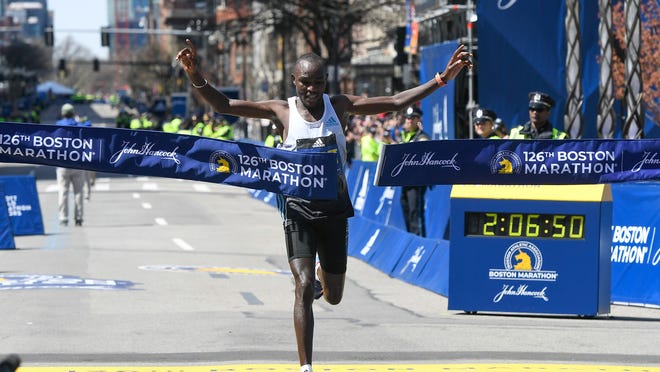 For the first time since 2019, the Boston Marathon took place on Patriots Day, the third Monday in April.

And on the 50th anniversary of the first time women participated, the 2022 women’s race did not disappoint.

The trio of Joyciline Jepkosgei (Kenya), Ababel Yesaneh (Ethiopia) and Peres Jepchirchir (Kenya) distanced themselves around the 15th mile. Jepkosgei dropped back after the two-hour notch and set up a final pairing of Yesaneh and Jepchirchir, the reigning Tokyo Olympics champion.

SPORTS NEWSLETTER:Join now for daily updates sent to your inbox

Back and forth they went the last mile. One would take the lead, the other would pass moments later. But it was Jepchirchir who had the last boost to take first place. Mary Ngugi (Kenya) took third place. Nell Rojas (2:25:57) finished first (10th overall) among American women.

Evans Chebet of Kenya broke away from a packed pack in the men’s field to win the race, which he did not complete in 2018. Chebet turned into Boylston Street with a steady lead as the crowd cheered him on to the end.

It was the 33-year-old’s first major marathon victory.

Chebet, who competed for Kenya but is also a citizen of the United States and Azerbaijan, has previously scored top five finishes in London, Berlin, Seoul, Valencia and Buenos Aires.

In the men’s wheelchair section, Daniel Romanchuk crossed the finish line first. Romanchuk (23) also won in 2019 and finished with a time of 1:26:58.

Manuela Schär took first in the wheelchair race for women at 1:41:08.

I won’t sit down and shut up: Mark Fincham on his race for Arizona Secretary of State