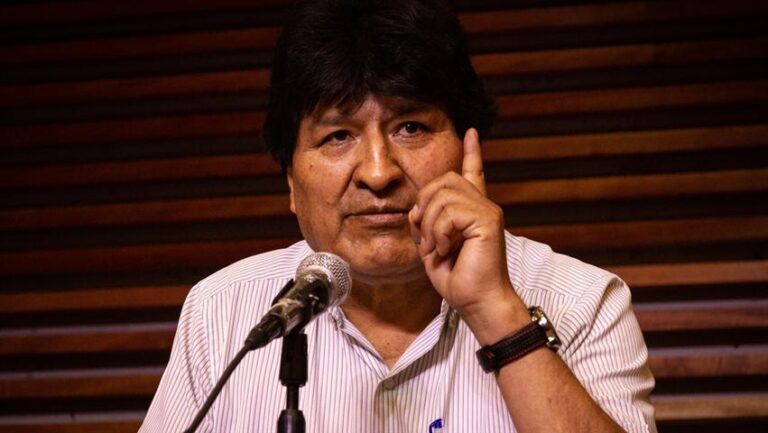 La Paz.- The decline that the United States is experiencing today in Latin America was highlighted on social networks Twitter Referring to the United Nations General Assembly by former President of Bolivia, Evo Morales.

“With the leadership of brother @petrogustavo that emerges in #Colombia, a sister country that suffers the consequences of a failed and misnamed ‘war’ on drugs, the decline of #USA in #Latin America is evident. The winds of freedom open The sky of #PatriaGrande”, he wrote on his account Twitter Leader of the movement of socialism.

In another message published on that social network, Morales congratulated Petro for his speech at the seventieth session of that multilateral forum.

In this regard, he stressed that he contributed to reclaiming, defending and strengthening the dignity and sovereignty of the #PatriaGrande against the interference of the arms of #USA. #LatinAmerica is going through a process of dignity and emancipation,” concluded Highland Country’s first former Indigenous leader.

A similar approach to Petro characterized the intervention of Bolivian President Luis Arce, who criminalized the United States’ economic, commercial and financial blockade against Cuba before the United Nations General Assembly.

“Another clear example of the imposition of unilateral measures is the inhumane and criminal economic, commercial and financial blockade against Cuba, which puts the lives of millions of citizens at risk,” the president stressed.

Ars assured that maintaining such measures and even including this country on the list of sponsors of terrorism is a crime against humanity.

“But at the same time, it is an unfortunate example that we must reflect on that most of the decisions taken by the majority in this assembly each year are not complied with by some countries,” he added of the draft resolution adopted decades ago. . On the need to put an end to that kind of vendetta.

Ars considered it unthinkable in a world ravaged by crisis and pandemic that unilateral coercive measures aimed at bending governments at the cost of hunger and suffering of their people are still in place.

He affirmed that in the current world situation, no country should be persecuted, punished or besieged for exercising its right to freely determine its political, economic and social order. “An example of the unilateralism with which some countries operate is the inclusion of Bolivia in the list of so-called main drug transit countries or illegal drug producers,” he criticized.

The dignitary clarified that Bolivia has a sovereign policy that yields significant results in fighting drug trafficking, unlike Washington, whose strategy has failed and needs change.

At 113, NAACP evolves for relevance on racial justice agenda

Studies have found that humans have a tendency to choose a diet high in healthy foods and specific micronutrients.