Executive Secretary of ALBA-TCP for the XXII Summit in Cuba 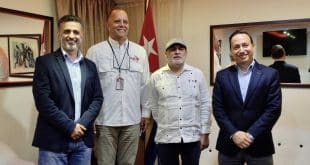 This Wednesday the XXII ALBA-TCP summit is due to be held in Havana, in which its member states will evaluate progress and challenges

We arrive for our summit with Ruben Dario Molina and @rlicausi, wrote Sacha Llorenti on Twitter. (Photo: @SachaLlorenti)

Sacha Lorenti, executive secretary of the Bolivarian Alliance for the Peoples of Our America-Peoples Trade Treaty (ALBA-TCP), expressed on December 13 that he felt “extremely privileged” to be in Cuba.

Prepared for the XXII Summit of Heads of State and Government, to be held tomorrow in Havana, and the celebration of the XVIII anniversary of “@ALBATCP. #AlianzaParaLaVida”, wrote the Bolivian politician on his Twitter account.

In another message on the same social network, Lorenti thanked Carlos de Céspedes Piedra, director of South America at the Antillean nation’s Ministry of Foreign Affairs, for the hospitality and “always generous welcome”.

We arrived for our summit with Rubén Dario Molina, Vice Minister for Asia, the Middle East and Oceania of the Venezuelan Ministry of Foreign Affairs, and Raul Licossi, Vice Minister for the Caribbean. #ALBAUnida”, he pointed out.

The executive secretary of the Mechanism for Latin American and Caribbean Integration also invoked the first meeting between commanders Hugo Chávez (1954–2013) and Fidel Castro (1926–2016) on December 13, 1994, and indicated that “the beginning of ALBA was the beginning of that embrace”. Happened from ».

Tomorrow the XXII ALBA-TCP Summit is to be held in the Cuban capital, in which its member countries will evaluate the progress and challenges, the situation in their countries and celebrate the birth of 18 years of this bloc of political agreement.

The coalition emerged on December 14, 2004, at a proposal by Fidel and Chávez, and is made up of Cuba, Venezuela, Bolivia, Nicaragua, Antigua and Barbuda, Dominica, Grenada, Saint Kitts and Nevis, Saint Vincent and the Grenadines and St. . Lucia. ,