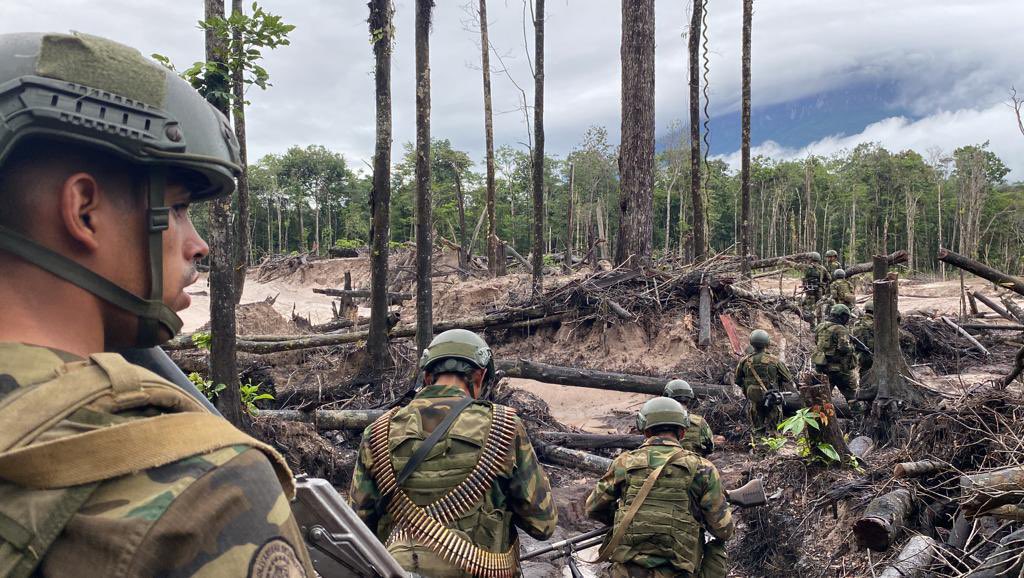 The airborne operation was supervised by Zulmar Rafael Ochoa Romero, General in Chief of Zody Bolivar.

This weekend, members of the Rapid Reaction Units (Urra-Cojedes) in the municipality of Gran Sabana found another secret clue – possibly – related to armed groups engaged in illegal mining in the south of Bolivar state.

The commission attached to the Bolivarian National Armed Forces (FANAB) said the road was located in the Los Arenales sector. Commander Chief General Domingo Hernandez Larrez, Commander of the FANB Operational Strategy, pointed out that the said track is located within the Canaima National Park, a heritage under a special administration regime; In this sense, he pointed out that this type of structure should not exist in the area.

Troops conducted an air campaign, and according to Hernández Larraz’s statements, the secret route served as a “logistical flow for armed groups” dedicated to the illegal exploitation of the mines.

Logistics flow, as explained by General, refers to the processes that extend from the manufacture or discovery of illegally obtained products to the commercialization stage. Therefore, this supply chain was terminated by the military in accordance with the guidelines established by the Ministry of Defense for Popular Power.

within the framework of the “Safety and Defense of Canaima National Park” plan, whose mission is to protect forests, forest reserves and ecosystems from “armed criminal groups disrespecting national sovereignty”; Commissions associated with FANB also carried out inspections to ascertain the presence of strategic materials in the area. During this, he carried 240 liters of fuel – believed – to be used for the criminal gang’s planes.

Operation Roraima, carried out by the Bolivarian National Armed Forces (Fanab), began in October 2022; And during its execution, military groups have located more than five thousand liters of fuel, more than a thousand rounds of ammunition, extraction motors, mining rafts and other types of strategic material.