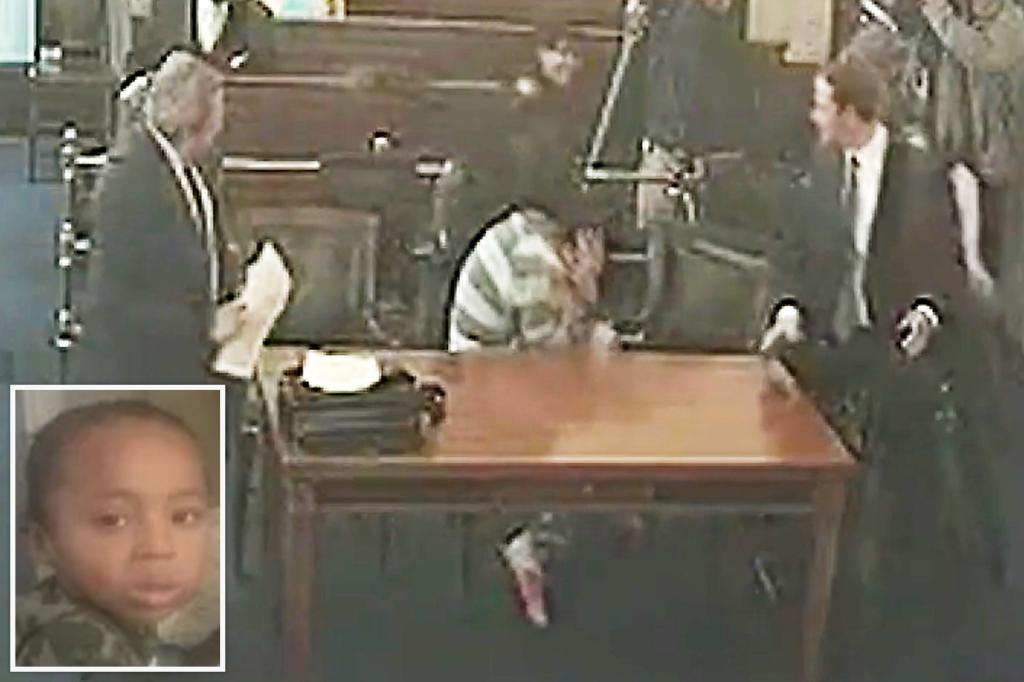 The father of a young murder victim flew into a rage in an Ohio courtroom and mercilessly beat a man accused of killing his young son.

Desin Brown, 22, is reportedly facing murder charges after he allegedly stabbed 29-year-old Naisha Lattimore to death and allegedly threw her three-year-old son Nilo into the Ohio River while he was still alive.

If found guilty, he could face the death penalty, but the boy’s biological father, Antonio Hughes, couldn’t wait to do some of his own justice.

In courtroom footage obtained by Fox 19, Hughes can be seen in the back row of the Hamilton County courtroom before sneaking up behind the defense table and hitting Brown in the jaw with a right hook.

He continued to beat Brown when two deputies rushed to restrain the offended father and knocked him to the floor.

In another video from WCPO 9, even after being handcuffed and surrounded by three assistants, Hughes continued to pursue the alleged killer, rushing towards him. It ultimately took four officers to bring him to the ground again, as shown in the video.

Hughes has been charged with contempt of court and will be jailed for seven days, WCPO 9 reports.

According to the Cincinnati Inquirer, Brown is accused of stabbing Lattimore in December 2020 after planning her murder for months. After he killed her, he allegedly waited several days before putting her in a body bag and having an Uber take him to the Ohio River. He told the driver that the bag was just clothes.

The newspaper reported that Lattimore’s body was found near the Purple People’s Bridge on December 12, 2020. Detectives said Nilo’s blood was found on a Paw Patrol blanket along with his mother’s body, and a stroller was found nearby, according to the Cincinnati Inquirer.

Cincinnati police detectives told a judge earlier this month that Brown killed Lattimore because she miscarried a child he thought was his, WCPO 9 reports.

Gerrard scores injury at Villarreal in 2-1 win at Getafe