FdT’s deputy presented a project of ‘Historic Repair of Malvinas’ 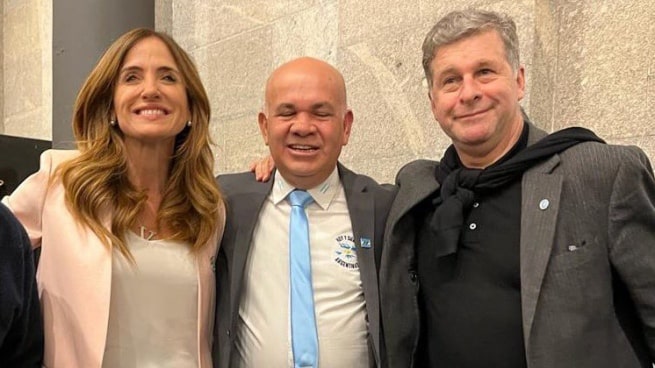 National Deputy of the Front of All (FdT) Victoria Tolosa Pazu and his comrades and former combatants aldo adolfo liva introduced a bill this thursday “Historic Repair of Malvinas” To provide benefits to those who participated in the 1982 war in compliance with the Compulsory Military Service Act.

The project was disseminated at a press conference held in the White Room of the Chamber of Deputies, which included the participation of Ernesto AlonsoMalvinas Islands of the La Plata Ex-Combatants Center (CECIM), and Director of the Malvinas Islands Museum, Edgardo Esteban, among others.

Justifying his initiative, Tolosa Paz said: “I apologize on behalf of the national legislators that in more than 40 years, in 480 months, in more than 500 ordinary sessions, we have not dared to raise this flag. “

“It’s now, it’s time to move on and pay off your debts”Added the deputy and recalled the conversation I had with Aldo Leiva—the first ex-combat deputy—at the time of drafting the project, which now wants to become law.

In @diputadosTV I talked about the historical day in which lived @DiputadosAR, Together with the deputy and former combatants @AldoAdolfoLeivaWe present the bill “Historic Repair of Malvinas”.
A deferred and deserved recognition to our heroes and their families pic.twitter.com/ovnrILXJM9

Tolosa Paz also noted the spirit that inspired the initiative, “not as an economic issue, though it is when legislating, but as a social reform, as it is a society that has been neglected for 10 years.” wants to repair. We are a generation that wants to take a stand against a state that has turned its back on them“, Told.

Along these lines, he highlighted the “change of expectation”, which began in 2004, with the policy taken by the government. Nestor KirchnerWhich allowed to “start settling the debt with the heroes”.

For her part, Liva insists that it is necessaryor “Recognition of the forgotten generation is an act of strict justice”, At the same time, he painted a more complete picture of the reality that the heroes went through 40 years earlier: “The dictatorship made us feel guilty for the defeat at Malvinas when we were only 19 years old.”

What is the initiative about?

The project, promoted by Tolosa Paz y Leiva, establishes the benefit of the “Malvinas Historic Repair” for those who were “enlisted as soldiers in the enlisted service” and participated in the South Atlantic conflict. Between 2 April and 14 June 1982“Engaged in effective combat action in the Malvinas Theater of Operations (TOM) in Georgia and the South Sandwich Islands, or indeed in the area of ​​the South Atlantic Theater of Operations (TOAS)”.

This is also being considered Benefit civilians who completed “service or support functions” at these locations during the war with Great Britain.

The amount of repair shall be equal to the value of “104 Minimum Pension” Argentina Integrated Social Security System (SIPA)”, which will be paid in “24 consecutive and updated installments in accordance with Article 32 of the Law 24,241 on Retirement Mobility”.

, Together with Victoria Tolosa Paz, National Deputy, we introduced the “Historic Repair of Malvinas” bill to the National Congress. pic.twitter.com/HHDdNQWX99

The initiative recognizes the physical and psychological consequences that affect ex-combatants and their families to such an extent, that “it is estimated that war casualties were the same in the post-war period.”

The text of the project points to a lack of public policy, attention, and control on the part of the state, particularly in the period immediately following the war and extendable for ten years, known as the “demolition process”. .

In great surprise, Semenya listed to race on worlds in Eugene

Wired Summit 2022: Technology, the future and everything we saw at the event’s conventions