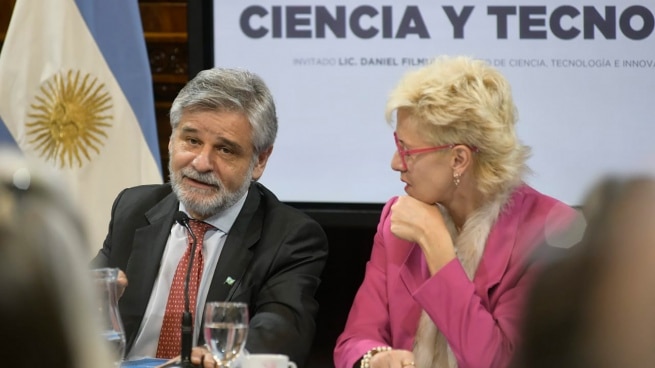 Minister of Science and Technology of the nation, Daniels Filmsdefended the bill this Wednesday National Science Plan 2030 That the executive branch has been sent to the National Congress and is being debated at the commission level in the Senate.

“If there is anything that pendulum policies cannot follow, it is science and technology. These are the sciences that need state policy in the medium and long term”Films said.

The official formulated these concepts at a meeting of the upper house’s Science and Technology Commission, which he attended along with the ministry’s secretary of planning and science and technology policies, Diego Hurtado de Mendoza, and the president of the National Council. scientific and technological research, ana maria franco,

“The only possibility for investment in science and technology is through a country willing to support state policies and innovation for the medium and long term,” he explains. @FilmusDaniel

Filmus specified that “if we add up all of Latin America’s investment in science and technology, we do not invest France” and stressed that “competition in these areas means an enormous amount of resources.”

In another aspect, he conceded that the executive’s project “makes sense for legislation if we do it by consensus.”

“The potential for growth in science and technology is closely tied to having Congress, when voting on the budget, regulate whether the government adheres to sending a percentage of the budget to that sector,” he said.

“If we add up all Latin America’s investment in science and technology, we don’t invest France”Daniels Films

“It is necessary for us to have the resources, objectives and a very strong decision of the national parliament which we must put into practice and follow the rules laid down by law,” he said.

At the end of the report, the initiative was approved with the signatures of all members of the ruling party and the opposition that made up the Science and Technology Commission of the Upper House.

What is the initiative about?

The project was approached from an integrated approach such as work and employment, Introduces missions and R&D strategies to each challenge: Federalisation, Gender Perspectives, Internationalization, and SustainabilityThe Ministry of Science reported in a statement.

In this sense, it also includes the Integrated Regional Agenda for Science, Technology and Innovation (CTI-CTI) of each region (Centro, CUYO, NEA, NOA, Metropolitan).

It outlines ten national challenges for the next decade, including: eradicating poverty and reducing inequality and socio-environmental vulnerability; To promote bio-economy and biotechnology to increase regional production, achieve food sovereignty.

This also includes contributing to the design of policies to strengthen democracy and expand civil rights; To build inclusive and quality education for national development.

It also aims to achieve accessible, equitable and quality health; To develop the space, aeronautical, telecommunications and defense industry sectors; Strengthening maritime research, the sovereignty and sustainable use of the assets of the Argentine Sea.

It also seeks to promote the development of the computer industry and information technology for productive innovation and digital inclusion; Promote the transition to sustainable development, and promote and consolidate a pathway to an energy transition.

Some of the core programs on which the plan is based are infrastructure-oriented “build science”; “Equiper Ciencia” aimed at equipping institutions with a fund of 100 million pesos for each jurisdiction for strategic projects defined by each province.

The plan also addresses transversal agendas that are oriented towards the general enrichment of knowledge; R&D&i technologies applied to; Social and Anthropological Sciences for Development; citizenship and scientific culture; sustainability; gender perspective.