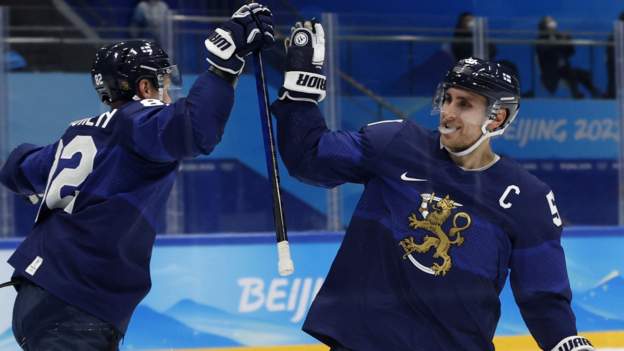 Finland reached their first men’s Olympic ice hockey final in 16 years after a 2-0 victory over Slovakia.

Sakari Manninen scored the opener in the first period for Finland, who have never won the gold medal.

Harri Pesonen scored into an empty net to seal the win late on after Slovakia netminder Patrik Rybar joined their attack in search for an equaliser.

They will face the Russian Olympic Committee, the defending champions, or Sweden in Sunday’s gold medal match.

The Finns had beaten Slovakia 6-2 in their tournament opener but this was a much closer affair, with Manninen’s opener one of a few scoring chances in the opening period.

The rest of the game was then dominated by the two netminders, with Slovakia’s Rybar making 25 saves, while Harri Sateri made 28 to earn the shutout for Finland.

While they have never claimed Olympic gold, Finland – the number two-ranked team in the world – have claimed a medal in three of the past four Games, including silver in Turin in 2006.

Justine Braisaz-Bouchet won gold in the women’s mass start biathlon as all three medal winners made a piece of history.

Braisaz-Bouchet became the first Frenchwoman to claim victory in the event, while Norway’s Tiril Eckhoff finished second to become the first female biathlete to win a mass start medal at three successive Games.

Compatriot Marte Olsbu Roiseland claimed bronze to become the first biathlete to win a medal in all four individual biathlon events at a Winter Games, having won gold in the sprint and pursuit, and bronze in the individual.

Roiseland also won gold in the mixed relay, meaning the 31-year-old claimed a medal in five of the six events she competed in Beijing.

There was more success for Norway in the men’s mass start event, with Johannes Thingnes Bo securing a dominant victory to win his fourth gold medal of the Games and fifth overall.

The 28-year-old is just the second biathlete, male or female, to win five medals at a single Games after France’s Quentin Fillon Maillet, who claimed gold in the individual and pursuit events at Beijing, plus silver in the sprint and both relays .

Thingnes Bo’s victory also took Norway’s gold medal tally at the 2022 Games to 15 – a record for any nation at a single Winter Olympics. They have also topped the biathlon medal table with 14 medals, double the tally of second-placed France.

The athletes had to battle freezing temperatures and high winds throughout both races, with the women’s event brought forward 24 hours because of forecast bad weather.

Canada won bronze in the men’s curling after an 8-5 victory over the USA, the defending champions.

A tight and tense contest turned in the ninth end when US skip John Shuster gave up a steal of two, which opened up a three-point deficit they were unable to recover from.

Victory avenges Canada’s defeat by the US in the semi-finals in Pyeongchang four years ago, which ended the Canadians’ run of three successive golds in this event.

The bronze will be Canada’s only curling medal at the Beijing Games after their women’s and mixed doubles teams did not make the playoffs.

Great Britain, who beat the usa in the semi-final on Thursday, play Sweden in the men’s gold medal match on Saturday.