Fiona maintains her strength by moving to Bermuda and later to Canada. 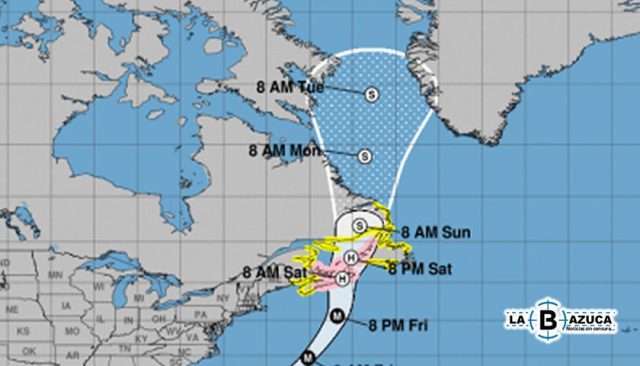 Miami.- Major Hurricane Fiona with winds of 130 mph (215 km/h) was approaching the Bermuda Islands on Thursday, through which it will pass west tonight on its way to its next destination: the east coast of Canada.

At 1200 GMT, the powerful storm, which has left a trail of destruction and death in Puerto Rico, the Dominican Republic, Turks and Caicos and the Bahamas, was located 455 miles (735 km) west of the British Sovereign Islands.

Halifax, in Nova Scotia (Canada), is separated by about 1,210 miles (1,950 km), according to the US National Hurricane Center (NHC) forecast.

According to forecast from Miami-based NHC, the center of Fiona will pass just west of Bermuda tonight, reach Nova Scotia on Friday and move into Canada’s Gulf of St. Lawrence on Saturday.

Maximum sustained winds are near 130 mph (215 km/h) with strong winds, making Fiona a Category 4 hurricane on the Saffir–Simpson scale and the most powerful of the three so far formed in 2022. Atlantic Basin.

Although some weakening is expected starting Friday, the NHC forecast that Fiona will continue to have strong winds on Friday night and after it becomes a tropical system on Saturday.

Hurricane conditions will begin to be felt in Bermuda from tonight and will continue through Friday morning.

In Bermuda, the approach of the storm will cause a hurricane with large and destructive waves, while a large area of ​​the eastern Caribbean will experience dangerous rip currents and rip currents.

Meanwhile, the forecast is less worrisome for Tropical Storm Gaston, which formed this week in the middle of the Atlantic, although a warning is in effect for the west and center of the Azores Islands (Portugal), which will affect winds and hurricanes. Step.

Maximum sustained winds with high gusts are near 65 mph (100 km/h), and depending on the forecast track, the center of Gaston will move near or over parts of the Azores on Friday.

Nuggets mailbag: Who should the Denver front office target in NBA trade deadline?