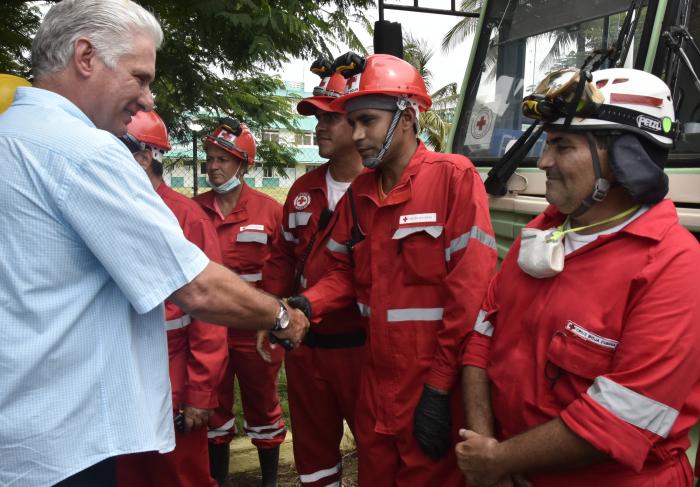 Matanzas.- Like many other great stories, one day we will have to tell in peace of these last five days, which have shaken Cuba with the pain of fire—literally and in spirit—and also by a desire that itself goes beyond.

The most extreme adversity has given rise not only to suffering: it is, once again, the possibility of learning, and ratification, inside the island, that the stones found in the battle are not seen as obstacles, but as fragments. It has been seen with which to put new roads, bridges and curbs on the path of resistance.

First Secretary of the Central Committee of the Communist Party and President of the Republic Miguel Diaz-Canel Bermudez said at the meeting this Wednesday morning that it reviewed what had been done in the previous morning and night for the purpose of the incident in the industrial area of ​​Matanzas. Fight against: What happened in the last hours did not cripple the country, because too many things have been done to continue reform, and it is demonstrative, to the head of state, who has the capabilities to move forward and learn every day. For the Cuban Revolution.

Amidst the horrific magnitude of events—the president valued—there was peace, the ability to reach consensus on how to do things; And the results are: “In about five days we have largely regained control of the fire,” Diaz-Canel said. And he stressed: “The important thing now is not to go back.”

Fires are controlled, with small outbreaks in extinction. This was the best news heard at the meeting, which also included the prime minister, Manuel Marrero Cruz, and the organization’s secretary of the party’s Central Committee, Roberto Morales Ojeda—both members of the Political Bureau. As was the case with the first secretary of the party in the province, Susli Morfa González, and the governor of the region, Mario Sabines Lorenzo.

Figures from multiple edges were updated and analyzed. The Minister of Public Health, José ngel Portal Miranda, said a total of 128 people had been treated as a result of the fire at the end of this Tuesday; 108 medical discharges occurred; No newly identified deceased was reported; And at the height of this Wednesday, the number of people admitted was 20 (five patients in critical condition, two critical and thirteen in care).

The owner told that the experts who are responsible for the rescue and identification of the missing people in the incident are preparing. Regarding the environment, he assured that the situation in the areas affected by the fire is being monitored.

By the way, the Minister of Science, Technology and Environment, Elba Rosa Pérez Montoya, explained that there has been a loss of height at the base of the smoking column, and predicts that this will continue to happen. “We continue, he said, with monitoring of air quality, especially in Matanzas.” He also remarked that the provinces of Mayabec, Havana, Artemisa and Pinar del Río are observed.

After hearing data about the water situation near the disaster site, the prime minister, Manuel Marrero Cruz, said that it was confirmed that contamination indicators were below danger figures, and that no patients were in hospitals affected by contamination. has not come. ,

The country’s electric-energy situation—particularly relating to the operation of the Antonio Guitares Thermoelectric Power Plant—; Work, step by step, of firefighters who no longer face the danger of an outbreak or explosion; Over 240 helicopter flights that dumped two tonnes of water on each mission were the issues addressed in the meeting. The importance of recording and reflecting all the actions deployed from communication to suppress the incident was also talked about.

It is very important to reflect – expressed by Roberto Morales Ojeda – what would mean that it would not have been deployed, as it had been, an integrated, coordinated action with extraordinary effort, which would constitute a true achievement. Is.

25 flights from Mexico and Venezuela were also discussed; the number of shows of solidarity from the carriers across the country, both state and non-state; how this incident has not affected tourism in any way; And how firefighters continue to work on fire control dykes, doing everything on the ground to suffocate what’s left.

How economic and social activities have been ensured in the area, more than 5,000 people evacuated due to the fire, what will be done to the homes affected by the event, the generosity that has come from other latitudes, and also from other places on the island, Mario Sabines Lorenzo spoke at the meeting. Meanwhile, Susli Morfa González argues about the importance of communication and the people of Matanzas who, in their most frequent ideas, share the historical direction of the revolution and the continued company for today’s top leaders with vast shared experience. give thanks for

The basic work of the province did not stop, he said: “The work that remains to be done now,” he insisted.

At the end of the day, President Diaz-Canel mentioned “the elements that led us into a phase of control of the incident”, as well as what has been done in terms of the recovery phase.

“A fundamental element here that allowed us to move forward, especially in recent times, was the efforts made with the partners of Quépet (Union Cubapetrolio), from the Electric Union, from Hydraulic Resources, to guarantee the flow of water. The supertanker base system itself, which was affected by fire in some places.” The dignitary spoke of efforts to be able to add technologies from Venezuela and Mexico to this system.

It’s easy to say, as he argued, but the work has been enormous; Because, for example, pipes could only be loaded with cranes, and work was done at very high temperatures, often interrupted by incident turbulence.

He spoke of the courage of all, of the construction forces that built the sand dam; of helicopters; of Defense Councils activated; the way the information flowed to the population; Not trusting because the hard work is not over; Qualified to guarantee that no more tanks fell: «What has been achieved, he insisted, has to do with valor, with courage, with solidarity, with commitment and with the unity with which its has been encountered. , I believe there are reasons, consequences are of essence and it is also certain that we will continue to move forward.”

The agenda of the country’s top leadership included a tour – led by President Díaz-Canel – through the Antonio Guitaras Thermoelectric Plant, where the production unit today sought ways to maintain the essential supply of water demanded for its operation. Demand is being made.

The next point of the itinerary was the arrival, not far from the event, of the driver, who carried water to the guitars, and the super tanker, who had a breakdown, which has reduced the flow of water required to the plant. Thermoelectric.

It was late afternoon when the head of state visited the Pier One entrance to the Matanzas supertanker base. There he spoke to the Venezuelan brothers who have come to our aid in this difficult time. A son from the Bolivian land said to the dignitary: “We are from many refineries, but here we try to speak a single language to fight that dragon (with reference to fire).”

There, where there were also valuable people from Cuba and Mexico, the President spoke of unity. Emotions marked many encounters in the midst of a landscape of gray and black scars caused by horror. They were the same feelings that were later experienced at the Camilo Cienfuegos headquarters of Matanzas University, where the president spoke with relatives, evacuated, and those affected by the fire threat.

The president talked about an empire that isn’t absurdly insane, the fanatical youth we have – and the kind of truth that has been well confirmed in these hours – of the great and great people of Cuba. And as usual, women ruled the dialogues on the go.

A university student told Diaz-Canel: “We trust you. The whole city trusts in you, because to trust you is to trust yourself too, because each one has to give his own grain of sand.” And the president replied himself, what would that mean? Then the young man, The one who told about the local projects returned to the task: «It’s you and the town. It’s us, because we’re all people.

Cheers to the revolution and its historical leaders, cheers to the people of Matanjas. And once again the voice of the young man expressed to Diaz-Canel: «We will keep going; Motherland or die we will win; …and we are with you.”