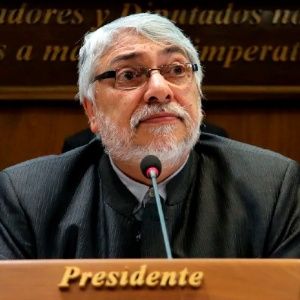 Paraguay’s former president and current senator, Fernando Lugo, suffered a stroke of ischemic origin on Wednesday and is currently in an induced coma, as confirmed by his personal physician, Jorge Querrey.

Doctor and Senator Querrey also reported that Lugo was the victim of a “stroke of ischemic origin”. It’s a clot. With high blood pressure, he was bleeding, but it’s a tiny bit of blood.”

In this sense, the doctor specified that the former president would remain in intensive care with mechanical ventilation, ruling out the possibility of neurosurgical intervention.

The doctor explained that the patient would be under ventilation for 12 to 24 hours until “the brain is adequately oxygenated” and then “trying to wake him up and remove those supports in such a way that we can improve the prognosis.” “

In turn, he argued that after the first tomographic study with contrasts, it was possible to arrive at a preliminary conclusion that it was “a small lesion in the posterior part of the brain.”

Many thanks on behalf of Guasu Mongueta Front comrades and allies, to everyone who is calling and writing to us, concerned about the health of Senator Fernando Lugo. He is stable and under medical care.


At the same time, the doctor said that the condition is controlled within the complication, while he added that “if we are not surprised, it will have a good prognosis.” However, he clarified that the risk is not absent when in intensive care.

Similarly, the doctor explained that the leader of the Guasu Front was in his office in the Chamber of Senators when he was transferred to the San Roque Sanatorium after presenting the first symptoms of the spill.