From Pontevedra to Poland, two paintings looted by the Nazis are returned home 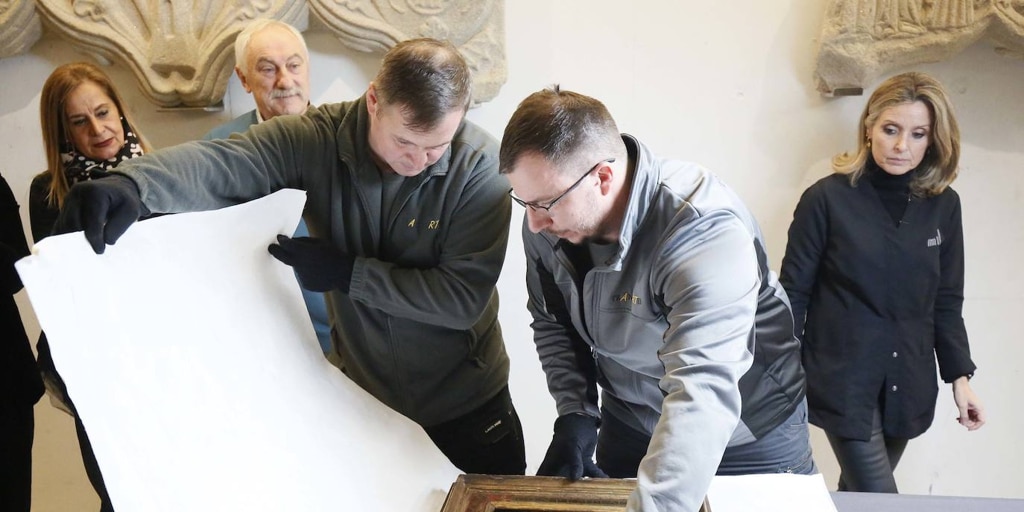 These paintings of ‘Dolorosa’ and ‘Exe Homo’ have been a long way from hanging on the walls of their rightful owners. almost 80 years after leaving Poland, These 16th-century works are now on their way to the central European country from the Museum of Pontevedra, How did they get there? The piece, attributed to one of the members of the workshop of Albert Bouts (the son of the Dutch painter Dirk Bouts and whose ‘Triptych of the Life of the Virgin’ rests in the Prado), was looted by the Nazis in 1944 during their Polish period went. Victory. , and from there he began an erratic journey until in 1971, he appeared in the Barcelona art trade. and later, in 1973, in Madrid. It was in the mid-90s when they ended up in the Museo de Pontevedra as part of the purchase by the founder, José Fernández López-Pescanova, of a collection of 313 paintings by different authors and chronologists. From Warsaw to Pontevedra, first. Now they will return home.

César Mosquera, Vice President of the Provincial Council of Pontevedra, left a record on Wednesday with his signature for these two flamenco works. Now, they are in the hands of the Polish government, which will return the works of art to their rightful owners. In 1944, the ‘Dolorosa’ and ‘Acce Homo’ were stolen from Gołucho Castle, and the family who owns them will receive them in the hands of the National Museum in Poznań after completing their rehabilitation. During the last two years, these pieces were displayed in the Pontevedra Museum, dependent on the Provincial Council, awaiting the finalization of formalities so that they could be returned home.

This discovery happened during the epidemic. Until then, the reason for the arrival of the paintings in Pontevedra was unknown. It was in 2020 when Mariusz Wisniewski from the Cultural Heritage Department of Poland’s Ministry of Culture and National Heritage contacted the museum interested in the diptych. According to the document he provided, the two pieces belonged to the collection of Princess Czartoryski in Gołuchów, stolen by the Germans during World War II. As soon as this became known, the Provincial Council accepted the return of the free works. “It’s a shame we have to get rid of these paintings, but It is a pleasure to cooperate with the repair of Nazi looting”At that time Mosquera was declared.

Time has passed since then, and the diptych was on display for months so that the people of Pontevedra could enjoy it before going back home. Mosquera, in the act of signing the agreement in front of Elzbieta Rogowska, Director of the Cultural Property Department of the Ministry of Culture and National Heritage of Poland, assured that she has signed many documents throughout her life. But not everything is the same. « This one for me It’s probably most satisfying because it’s helping to restore an injustice.Help restore looted art, help build a better world”, Rogowska said.

Rogowska expressed “from her heart”. Thanks to the museum and the Pontevedra Provincial Council for the speed and facilities given for repatriation. Furthermore, he insisted that the value of the works lay not only in their pictorial beauty, “but symbolically, because of their plundered condition and the works now restored.”

The director recounts the fatal consequences that the Nazi occupation had on an artistic and marital level in Poland: the country lost 70% of its national heritage in World War II due to the destruction and theft of churches, museums and private collections, the missing Done 516,000 works from different parts of the national territory. Some, he pointed out, were returned soon after World War II, but many more went missing, gradually, as in the case of ‘Dolorosa’ and ‘Exe Homo’, they are appearing. Rogowska did not hide her feelings: these two works were part of the content of her doctoral thesis and I’ve only seen them in black and white photos so far,

On tour in the United States he went to the David Bowie musician to try a particular instrument: Alberto Fernandez and another guitar

Self service terminal to educate citizens in computerization – 5th September