From Rwanda to La Matanza, the Villero Priest Who Survived the Massacre 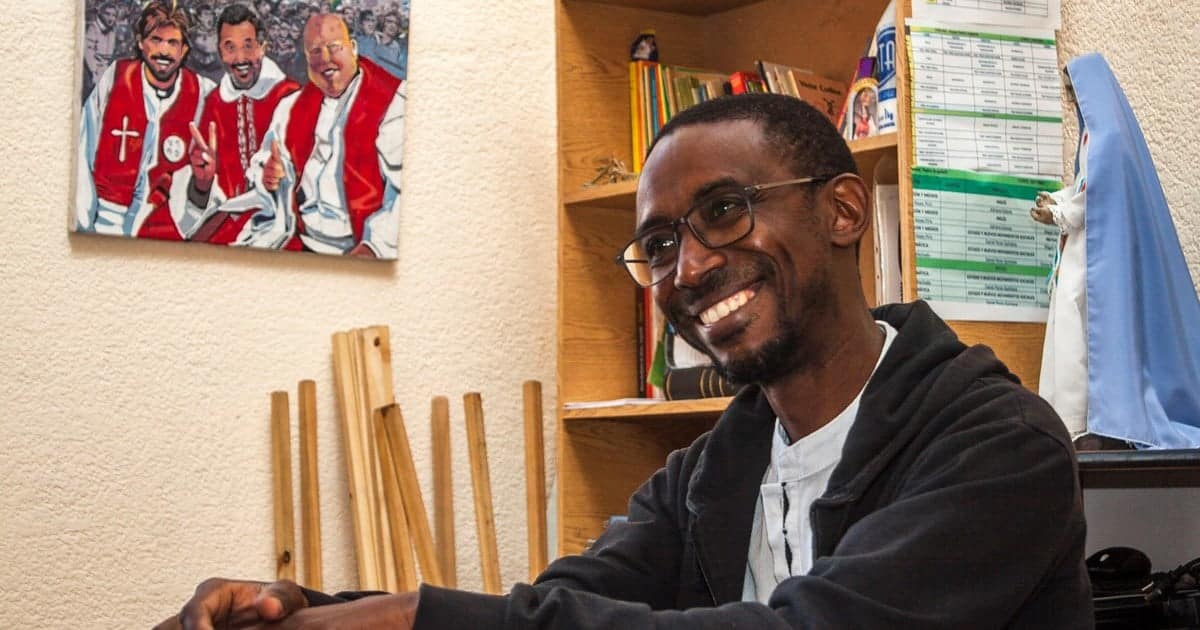 He grew up in poverty, his father was murdered, he adopted the priesthood and today he does a great charity work in the suburbs.

The streets of the 22 de Enro neighborhood in Ciudad Evita, La Matanza district are named after flowers: chrysanthemums, gladioli, azaleas, magnolias and carnations. Before we arrived at our destination and the monoblock walls, the neighborhood’s humble low-lying houses, temples spoke of a real presence of faith: the San Jose sports arena, the home of beloved father Bachi (who died of Covid) in 2020, of drugs A tireless fighter against and brother of those suffering from addictions), Father Carlos Mugica Kindergarten … Walking down Crovara Avenue in the background we arrive at Beato Enrique Angeli y Martires Riojanos Parish. In La Matanza, Father Anaclete Mbuguze, a missionary from Rwanda, was waiting for us.

“I was born in 1979 in Butare, in the south of Rwanda, to a humble, poor family of 7 brothers. We always live by the fruits of the earth. In this context we educate ourselves with an effort to move forward. My parents encouraged us to try to study to at least finish high school. Those were difficult times, how difficult was it to pay tuition and fees! [N. de la R.: Aclara Anaclet que la escuela era pública, pero el alumnado asumía un costo.] My father died in 1994 during the massacre in my country and my mother in 2002, just a year after I entered the Church of the Missionaries of the Sacred Hearts. My younger sister died just a few years ago,” says Father Anaclet with a foreign accent, plus, his good accent in clear Spanish.

Father Anaclet says that his parents were Catholic, “they got married exactly 70 years after the gospel came to my country. Didn’t the early Christians look alike? We were educated in this faith and like any other Christian.” , we went through the catechumenal process. We went to the cathedral church in the Catechism and Mass, about 5 km away. It was not easy going to mass every Sunday. My earliest memory is my baptism on December 25. We got up early and walked in the dark The area where we lived had no electricity and no transportation at the time. We were supposed to live on the outskirts of the country’s second largest city, but this was a reference to cities in Africa 30 years ago.

Father Anaclete is in a parish in the 22 de Enro neighborhood of Ciudad Evita.

– And how was your priestly business born?

When I was 10 years old, a Salesian community came close to my house and established a small chapel. We used to go there collectively, we couldn’t fit inside something so small. From there my profession slowly started. I remember, being an altar boy, wanting to be a priest. When the carnage arrived, the study was somewhat interrupted. Somewhat indignant about what had happened, I took it on again and, I would say, with a crisis of confidence. I returned to the path of faith thanks to my classmates and the school where there was room for prayer and the Eucharist. In 2000 I started pre-noviate with the church and did part of the noviate in Rwanda and another in Cameroon. I studied theology in the Dominican Republic. I was accommodated in my country in December 2008 and I came there only for Argentina.

– And why did you come to Argentina?

My congregation makes us outgoing missionaries, that’s what our identity is. Our spirituality and charisma are born out of contemplation of the heart of Jesus and the heart of Mary, always reminding us that God is love and it is the love of God that we wish to proclaim. Argentina was the first country after Europe we arrived, in 1941, starting in Rio Cuerto in the province of Córdoba, where we had a diocesan seminary where the current Bishop of Quilmes, Cacho Tissera, was trained. After completing that mission in Rio Cuerto, the congregation came to Buenos Aires, Lugano, and Patagonia.

– Why did you choose such a populated area?

We contemplate the pierced heart of Jesus that leads us to the crucifixion, the crucifixion. We declare Chheda in Chheda. That’s why we look for places where this ideal of harmony with our charisma. Latin America has another way of saying the same thing: options for the poor. We say: Choice for people who move.

Anaclet explains that he chose a missionary congregation dedicated to the poorest.

-How is the Catholic Church in Rwanda?

He is young, alive and with many challenges. It is growing, but so are other Christian churches. As it is not of angels, it has its sins and its powers. One of their challenges is to prophesy, above all to help in reconciliation, to protect human rights, to be on the side of the poor, to be the voice of the voiceless.

Are we talking about genocide?

It is a difficult topic to talk about because of the wounds still open. I have lost close people, acquaintances, my own father in the massacre. I was a teenager when this happened and knew what was going on. But this tragedy began a long time ago and its consequences will last for many years. When I see some political and partisan extremism, even religious, I immediately think about what happened to our Rwanda and I pray that these situations do not escalate. For example, the use of the word “hate” in politics is not only in Argentina, but in fashion. I wish it didn’t get used to spreading more hate.

This priest, like every human being, has been carved out of a story, his story. But also for his present and his projects: construction of a school soon begins with funding from the Department of Social-Urban Integration of the Ministry of Social Development of the nation. “I don’t know where I’m going tomorrow. All I have in my heart is to continue my missionary service here or wherever my congregation needs me. I’m happy here, just where I was before, Although the challenges are different everywhere”, said Annalet with a heavy white smile on her black face, which shows Africa in the village of Matanjas.

When Anaclet hears the word hate, she is shocked as it drives her back to the carnage.

Rwanda, victim of a genocide

Rwanda is a country the size of our Tucumán province in Argentina. It is bordered by Uganda to the north, Burundi to the south, Tanzania to the east, and the Democratic Republic of the Congo to the west. Its local language, Kinyarwanda, unites the three ethnic groups that inhabit it: Hutu, Tutsi and Twa. The 1994 genocide, which killed one million people in three months, was the product of internal ethnic violence, fueled by the economic and geopolitical greed of the great world powers, which placed their ambitions on the wealth of this country: the beautiful hills. , parks that protect natives species that arouse tourist interest and a simple way of life for the techno-industrial world based on agriculture, livestock and some very valuable minerals, which are used for cell phones and computer hardware, Colton , a mixture focused on the production of natural columbite and tantalite.