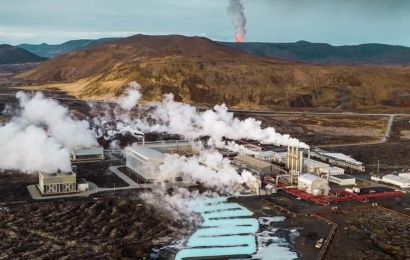 United States Department of Energy DOE announced today that it will provide more than $15 million in funding for two projects to develop geothermal energy and reduce costs by at least 25% by improving drilling speeds in wells for geothermal energy.

40 million homes
The DOE has set a goal of powering at least 40 million American homes with renewable geothermal energy by 2050. The expansion of this clean power source will help meet President Biden’s goals of achieving a clean power grid by 2050. by 2035 and a net-zero economy by 2050. These investments will also make progress toward DOE’s geothermal goal of reducing the cost of enhanced geothermal systems by 90% by 2035.

“There is incredible and untapped potential to harness the heat from beneath our feet to meet our energy demands with renewable resources,” said US Energy Secretary Jennifer M. Granholm.

Jennifer M. Granholm, United States Secretary of Energy: “By lowering the cost of drilling, we can facilitate the expansion of geothermal energy and help transition the country to a clean energy future while creating high-paying jobs across the country”

60 GW target by 2050
Geothermal energy comes from heat that continuously flows from the Earth’s core. Wells can be drilled to harness that heat and bring it to the surface to generate electricity, heat and cool buildings and other uses. The DOE has a goal for geothermal energy to contribute at least 60 gigawatts of clean, renewable electricity to the United States by 2050, with only a fraction of that potential achieved so far.

drilling cost
The main obstacle to achieving this goal is drilling costs, which can account for more than half of a geothermal project’s total cost. The US Department of Energy notes that by taking advantage of oil industry experience, laboratory studies, and commercial and academic expertise, new demonstration projects can dramatically reduce drilling costs and make geothermal cost competitive with other energy sources. can help.

Selected projects are:
Unlimited geothermal approach to drilling potential (GLAIDE). The project will be located in the so-called Denver-Julesburg Basin in Colorado. company Occidental Petroleum and its industry partners, national and academic laboratories, will drill twin high-temperature geothermal wells using new and existing drilling techniques. The team plans to drill deeper and at a faster rate than most existing geothermal systems. The estimated amount of the award is $9 million.

Geothermal geyser field in California will have physics based drilling evaluation and alternative bit design. company geyser power And their industry partners, national and academic laboratories will apply innovative drilling methods and techniques to increase drilling rates by at least 25%. The work will involve testing different methods over a range of temperatures and conditions. The estimated prize money reaches 6.2 million Euros.

These projects build on previous investments from the Department of Energy (DOE) to advance geothermal drilling technology and methods, helping to move research from laboratory settings to the field and ultimately to the market.

Occidental Petroleum Corporation NYSE: OXY is a multinational company dedicated to the exploration and exploitation of oil, headquartered in the Westwood district of Los Angeles. It operates in the United States, the Middle East, Africa and Latin America.

The United States Congress recognized the work of 40 Hispanic personalities