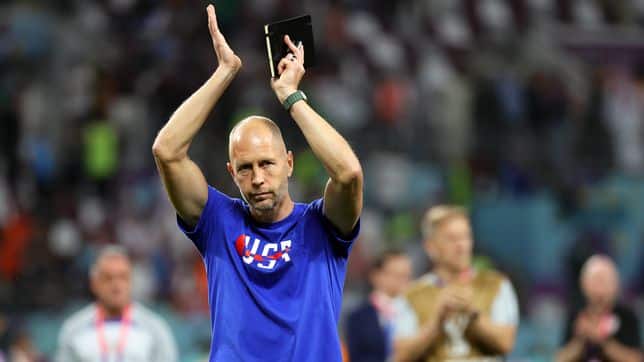 2022 World Cup in Qatar pushed back USMNTSince the loss to the Netherlands, the men, led by Greg Berhalter, broke ranks to take a few days off and later join their respective clubs, while On the part of the American coach, his future at the helm of the team is unknown.

find him team usa The best World Cup possible is in the making in the 2026 edition, which will be hosted at home together with Canada and MexicoThis is why a possible participation in the 2024 Copa América has already been noted as a way of preparing for the next World Cup edition.

However, the big unknown is the technical direction of the American team in 4 years, Well Greg Berhalter He still doesn’t know his future, a situation he said he will analyze in the coming weeks.

“For the last one-and-a-half months I have been just focusing on the World Cup, on getting things done with this group. And over the next few weeks, I’ll be clearing my mind. I’ll sit and think what’s next.”said the USMNT strategist.

Berhalter is expected to meet with US Soccer sporting director Ernie Stewart in the coming weeks. In which the details of the future project of the US team are touched upon and it may be defined whether the coach will continue to lead the team.

Thank you for your unwavering support right from the tough qualifying journey to the knockout rounds here in Qatar.

It’s been a privilege to represent the United States of America, and we can’t wait to play in front of all of you on home soil in 2026.#only forward pic.twitter.com/A1Fr1ERKXk

IIn the event that Greg Berhalter as head of the USMNT continues for the next World Cup process, he will be fighting against historydue to the fact that previously no coach had been chosen to continue beyond four years.

Since 1995 Bora Milutinović was fired despite the fact that the year before he had managed to qualify the USMNT for their second instance of the World Cup. The same happened in the process of 2003-2006.In the years he opted for the continuation of Bruce Arena and Team USA, they were eliminated in last place in their group in the group stage.

Thereafter, they picked Bob Bradley and continued after the 2010 World Cup, however, The historic American coach was fired exactly one year later and replaced by Jurgen Klinsmann, who led the USMNT to Brazil 2014 in the process.

However, after Brazil 2014, The German’s project faltered and ended in complete failure as Russia did not qualify for 2018, which led to his dismissal.

As such, if Berhalter continues as premier of the United States, he will be fighting against history to avoid the same outcome as his predecessors. Finally consolidating the USMNT project for the most important World Cup that Team USA will face.

Pelosi says the reconciliation bill is on the way to pass, but Democrats are still divided