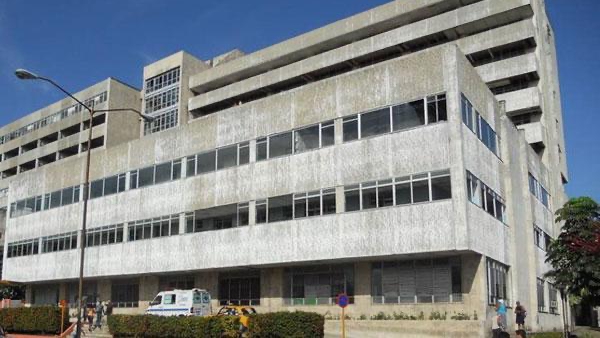 Havana’s Directorate of Health published an informative note on its Facebook page, which excused the death of 26-year-old Andy Aguero Barrios two days earlier.Whose mother condemned on the same social network as waiting for an ambulance for hours at the Rafael Valdés Polyclinic in Havana.

“On the basis of a complaint published on the social network on July 14, 2022, in relation to the medical care provided to patient Andy Aguero Barrios from the municipality of Cotoro, province of Havana, a commission was created to investigate the blasphemous facts. progressed to,” says the note, which describes Aguero Barrios as a patient “with a history of autism and vision loss secondary to hereditary optic neuritis (Leber’s disease).”

According to the text, on June 24, Aguero Barrios presented “fever, diarrhea and vomiting” and was assessed at home by the family doctor and nurse, who offered to hospitalize him, “to which the mother took two occasions.” But refused”. which was maintained at “home follow-up with medical treatment”.

On July 13, the young man was again tested for diarrhea. The studies were carried out in the polyclinic “who were replaced” and it was decided to refer him to the hospital.

Havana’s Directorate of Health highlighted that, while he was in the polyclinic, Aguero Barrios “received medical assistance at all times, until he received medical emergencies in the emergency room of the Miguel Enriquez Clinical-Surgical Hospital integratively”. He was not moved by the system, where he was welcomed by the guard team of the institution.” However, he did not mention the waiting hours from “morning”, to which he complained on Facebook about the deceased’s mother, Maritza Barrios.

According to mother’s post, Doctors tired of calling everywhere and “an ambulance” didn’t show up,

Barrios also condemned that an ambulance arrived at the health center and left without the young man’s assistance: “An ambulance came a moment ago with a case and did not want to take it, (…) the doctor made a trok. Asked to apply another serum and not even the one they left us,” he said.

One user, identified as Davis Lawton, said on social networks that it was the ambulance nurse who could not move the young man, and explained that he could not take the patient because he was transporting another person who was critical. was in position.

“I am the nurse of that ambulance, I have worked in SIUM for 15 years and I repeat, there was another seriously ill patient in my car and I could not get down to pick him up because the relatives of the other patient could not go. were to allow it to happen when There is one ambulance for four municipalities and 200 patrols for each municipality.Following comments on Barrios’ publication, Cuban wrote on Facebook, according to a screenshot shared by another user on the same social network. The ambulance nurse’s publication disappeared from her Facebook wall.

According to the provincial health directorate, Aguero Barrios deteriorated in hospital “and later presented with cardio-respiratory arrest. He did not respond to cardiopulmonary resuscitation maneuvers and died at 6:00 pm.”

The note said the family refused to conduct an autopsy by the hospital’s directors and acting doctors to determine the cause of death.

“During a home visit, the information provided by the maternal grandfather revealed dissatisfaction with the quality of care by the ambulance crew who transferred the patient from the polyclinic to the hospital, which was verified during the investigation and This will result in relevant measures to be adopted”, concludes the note from the Provincial Directorate of Health.

Judging by what the text says, the ambulance crew with whom the “related measures” will be taken is not the one who could not take the patient to the hospital, but the one who eventually transferred him.

An hour after the organization published the information note, Lawton assured on his Facebook account that he and the rest of the crew were fine.

The nurse writes, “I want you to know that we, the crew, are fine in our homes with our families. They didn’t fire us or put us in jail. Just because we’re not to blame for what happened ” assures that the only mistake he made was “not going to the car salon with Andy, but that doesn’t mean he aggravated Andy’s situation, because it wasn’t up to me what I did, It was up to me to do more than that. He was taken to the hospital. He didn’t die because of us,” says Lawton and asks that they no longer use him “as a spearhead to attack the health system.”

However, the reality is that A shortage of ambulances, to which the Havana Health Directorate’s note does not mention, has caused other deaths in Cuba., in April this year Six-year-old Cuban girl dies in Mela Municipality, Santiago de CubaAfter having convulsions for three hours and seeing Denied specialized medical care due to lack of an ambulance to take him to the hospitalIn January, another five-year-old girl died of respiratory failure at the Mario Muoz Monroe Municipal Hospital in Colón, as it was impossible to transfer her to the Pediatric Hospital in the city of Matanzas, “because there was no ambulance equipped”. to do.

Take a tour of the St. Paul’s Dabbler Depot.